The offseason ends in less than four weeks as Spring Training camp opens! 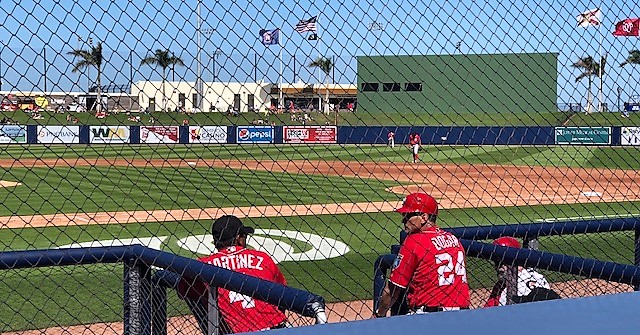 Photo by Luis Albisu for TalkNats

For a Washington Nationals team coming off of a 107-loss season, the 2023 season is going to be all about elevating the prospects and youngsters in the system while showing progress at the MLB level. There is certainly a huge core building of young players aged-24 and under, and if you are an optimistic person, you do not have to look hard to see the positives. The pessimist on the other hand is spiraling in the doom and gloom and in the negatives of losing seasons. Guess what, that is how the 2012 NL East Champion Nats were born out of six consecutive years of losing, and that team turned those six years of hardship into eight years of winning that culminated in a World Series parade less than four years ago.

1. The Nats core of players on the MLB roster. The previous core of the 2019 World Series team is almost all gone. A new core of younger players is emerging but none have achieved superstar status — yet. While Cade Cavalli is a prospect that could make the Opening Day roster, the current core of Luis Garcia, Keibert Ruiz, and CJ Abrams are already contributing for the Nats — and Garcia and Abrams could be the middle infield for a long time for the Nationals. Who else will join them? Josiah Gray must move up to their level, and hopefully are joined by Cavalli and MacKenzie Gore.

The corner infield could see Jake Alu at third base and Joey Meneses at first base at some point in the future, and until they are unseeded. It is the outfield that has the mega star prospect names in Elijah Green, James Wood, and Robert Hassell III with Cristhian Vaquero a year or two behind them. The athleticism in that outfield is off the charts. Whoever the Nats draft in 2023 with that №2 pick, that player will jump to the top of the discussions of the future core.

For anyone paying attention, it is the starting rotation that remains the biggest question mark for the future of this team. Cavalli, Gore, Cole Henry and Jackson Rutledge are/were all Top-100 prospects, but all four have been hit with the injury bug, and Henry’s TOS surgery puts a cloud over him.

We will see how general manager Mike Rizzo will build a starting rotation with no clear №1 pitcher or that veteran ace that the successful Nats’ teams had in the past.  With Susana, Jake Bennett, Andry Lara, Aldo Ramirez, Mitchell Parker, and Rodney Theophile as starters at High-A and below, these are the next tier of starting prospects to keep an eye on.

2. The Draft. The Washington Nationals will be drafting at the №2 spot in the 2023 draft and should come away with a player that will impact this team for years to come. Right now it looks like the Nats would snag either Dylan Crews or Chase Dollander in July’s draft after the Pirates pick first in the draft. Some have said that this is the best draft in years. Of course time will tell on that.

This draft pick would give the Nats at least six years of team control and hopefully be as impactful as former top picks like Stephen Strasburg, Bryce Harper and Anthony Rendon.

3. The top prospects in the farm system. The current farm system has been ranked anywhere from №8 to №15  depending on where you look. The team moved into the top half of baseball after the team traded Juan Soto for an exciting package of top prospects. Depending on which ranking system you look at, the top prospects have James Wood, Elijah Green, Robert Hassell III, Cade Cavalli, and Brady House plus some exciting names after them with Cristhian Vaquero, Armando Cruz, Jarlin Susana, Jeremy De La Rosa, T.J. White, and Jackson Rutledge.

Baseball America also acknowledged that House, Vaquero, and Susana are just outside of the Top-100 prospects.

We can certainly debate the Washington Nationals prospects lists and whether it should be Joey Meneses or White for first base, and Jake Alu for a starting spot or where De La Rosa, Vaquero and Cruz fit in.

4. Meneses sophomore season. After Meneses put up a Topps Rookie All-Star season, we have to see what is next for the 30 year old. Baseball is always skeptical of magical two-month seasons, and FanGraphs is projecting a .779 OPS for Meneses in 2023. That is still good, and the hope is that the sophomore can get closer to the .930 OPS he actually put up in 2022.

While Meneses led all qualified 2022 MLB rookies in many key offensive categories including batting average, slugging, OPS, OPS+, wOBA, and wRC+, he did not receive one Rookie of the Year vote across all ballots from first place to third place. Nobody with a brain thought Meneses had a chance to win the ROY, but a vote or two on that third place ballot would have been a fitting nod to one of the best 56-game spans for a rookie, ever.

5. Team defense. The Nats hot streak started the day that Abrams was called up to join Ruiz and Meneses. In the sixteen games that Abrams, Meneses, and Ruiz started together — the team went 9-7 (.563 winning percentage) and finally the pitching staff was looking like they were good. Much of that could be attributed to the new infield defense that ranked sixth in the Majors in that span from dead last in the 116 games before.

“Yeah. You know what, I liked what I saw towards the end. Our defense was better,” manager Dave Martinez admitted at the Winter Meetings.

His pitching staff finished with an MLB worst 5.97 ERA but it was over 6.00 before mid-August.

“One, it had a lot to do with our defense early. It really did,” Martinez said. “I think we improved once we got CJ [Abrams] playing shortstop to move Luis [Garcia] over to second base, and [Ildemaro] Vargas did a great job for us at third base.”

You hope that we never see a roster built on such poor defense. Yes, every once in a while you sign a Daniel Murphy because the offense will exceed the defensive negatives, but now the NL has a universal DH so you really have to try to get the balance right.

The positional roster looks set with an outfield of Corey Dickerson LF, Robles CF, Thomas RF. Dickerson has a Gold Glove and Robles has been a Gold Glove finalist. In the infield, it looks like Jeimer Candelario 3B, Abrams SS, Garcia 2B, Dominic Smith 1B with Meneses and Ildemaro Vargas as infield depth. We expect Meneses to get most of his reps at DH. At catcher it will be Ruiz as the starter.

6. A winning team concept won’t arrive for a while. The Nats are built today to lose 93 games per FanGraphs with 69 wins. That is a considerable 14-game improvement over last year, and if the Nats can get to 69 wins or better that should put them in a position to push their way towards a winning season in 2024.

Those projections are courtesy of FanGraphs that has projected the Nats at a .428 winning percentage and a 28.2 team WAR. Every team starts with 40 wins and you add the WAR and you get fairly close to the projection.

It is not great to be in a position where you know you have little chance to compete for the postseason. But you have to try to beat even the projections. In my opinion, win 73-games with a contributing core, and that will feel like a positive 2023 season.

“We’re young, but we can compete,” Martinez said. “And, I don’t want them to think that, hey, we’re rebuilding. We are here to compete, and we’re trying to win as many games as possible, and that’s going to be the message. I’ve sent that message at the end of the season, and I want them to understand that, hey, losing 100 games is not acceptable. It’s not. We’re going to get better. So I want them to come to Spring Training knowing we’re going to compete and compete to win every day.”

7. Beefed up analytics and development departments. Yes, after positive movement last year in the analytics and minor league development staff, there was a huge overhaul of personnel under De Jon Watson’s lead. The team has added more personnel to the system this offseason also. Two new hires have backgrounds in biomechanics  with the hires of Allen Ho amd Brittany Mills

The team also hired Delino DeShields as their new Double-A manager per reports. He replaces Tripp Keister who was reportedly terminated by Watson.

There are over 130 employees under general manager Mike Rizzo that are supporting the system in scouting, development, analytics, medical, research, and operations.

8. Ownership. We broke the news over a week ago that the Nats had no imminent sale of the team. On April 11, 2022, and over nine months ago, the Lerner family made it public that they would explore selling the team. The Lerner family has not been heard from in any official capacity regarding the Nationals in that entire timeframe.

Since we broke the news that Leonsis’ Monumental Sports & Entertainment group had been the clear frontrunner in a purchase of the Nationals, the process went off the tracks as we reported back in November and now looks like it will be a long wait to see if the team will be sold or even a sale of a large minority stake in the team. The MASN valuation caused a large divide in the negotiations per sources.

The Phoenix Suns and Mercury reportedly just sold last month for $4 billion after their most recent valuation was at $2.7 billion per Forbes for just the Suns. The Washington Commanders should sell for over $6 billion.