The balance between best defense and best lineup for the Nats! 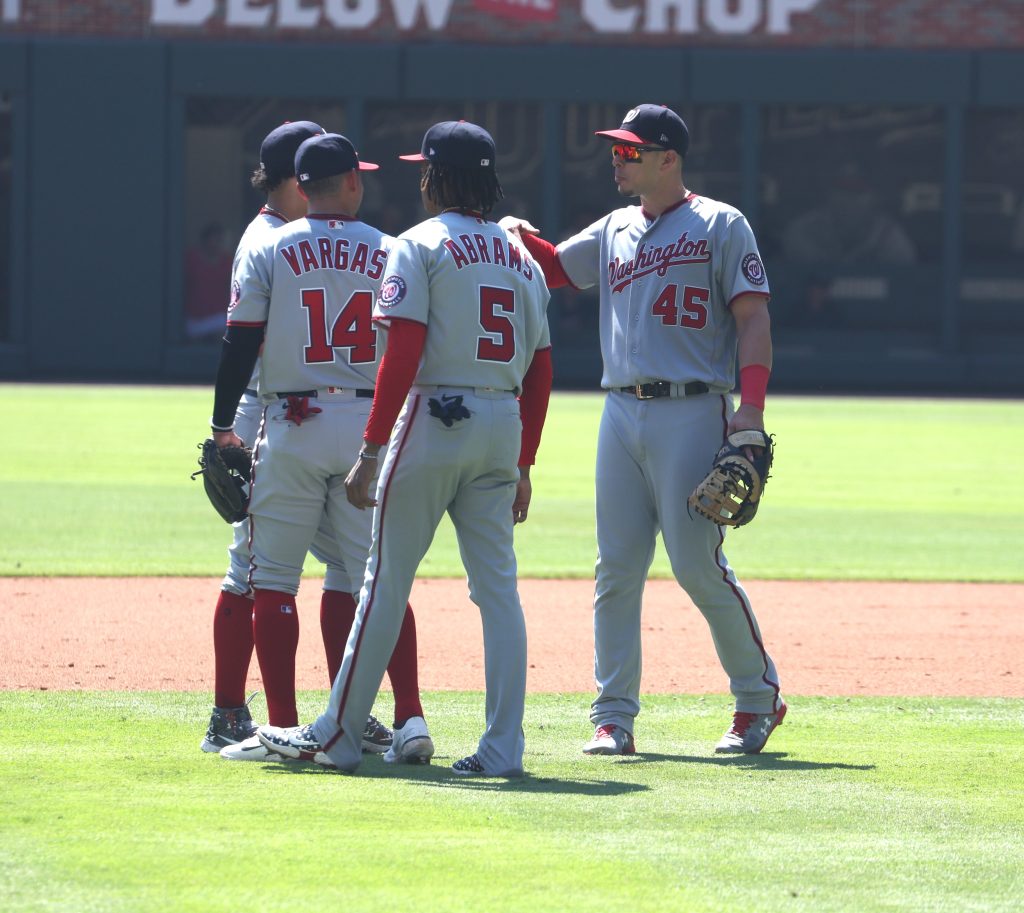 The Washington Nationals were dead last in team defense until August 15 of this season, and from August 16 forward and the installation of CJ Abrams at shortstop, the entire team was transformed into a Top-10 defense. A lot of the credit goes to players improving their own game like Victor Robles, and Ildemaro Vargas turned in Gold Glove defense at third base. Lane Thomas shifted to right field and was a marked improvement over the poor defense from Juan Soto. But let’s face it, Thomas is no Soto with the bat, and that begs the question of where do you place your position players on paper for the 2023 season without Soto in this lineup?

The positions that seem to be set going into the 2023 season are Keibert Ruiz at catcher, Abrams at shortstop, Luis Garcia at second base, Robles in center field, and Thomas in right field. Even though Vargas is a top defender, his bat is not consistent enough to pencil him in to start — rather he will be a bench bat. So who starts at designated hitter, first base, third base, and left field which are the four open spots? The answer can be given is that two of those spots will be occupied by Jeimer Candelario who the Nats signed as a free agent last week, and the newly crowned Topps Rookie All-Star, Joey Meneses.

If we look at third base defense, the Statcast OAA stat for the past three seasons encompasses Candelario, Vargas, and even Carter Kieboom. OAA is a cumulative stat, and that is an issue when looking at their numbers and trying to compare them to full-time third baseman like Noland Arenado, Manny Machado, Alex Bregman and Jose Ramirez. The Vargas stat is positive, but Candelario is ranked 64th at a -4 and Kieboom is a -13 for only 91 games played in that span. Extrapolate that for 3 full-seasons and you might have a record set for the worst ever defense in the Statcast era.

Manager Dave Martinez on the third base competition:

How can you play Kieboom at third base given those poor defensive stats? It is like putting Garcia back at shortstop. No, heck no if his glove looks like it did before. Until general manager Mike Rizzo finalizes his roster, there is enough positional flexibility to look at putting Meneses in left field or first base, and Candelario at third base or first base, and at least giving Kieboom a fair shot in Spring Training along with Jake Alu who led all Minor Leaguers in DRS (defensive runs saved). There are certainly enough players to try-out at third base. There are plenty of candidates at first base with adding Matt Adams on a minor league deal today, and clearly he would also fit the DH role.

On Candelario talking about playing third base, you can hear the words from his mouth:

“The best player will play third, and we’ll make other arrangements for the other players,” Rizzo said.

On Candelario talking about playing first base.

Let’s talk about the offense too. After Josh Bell and Soto were traded, the Nats offense looked good with Meneses taking over with the hot bat. But the team by the end of the season scored only 3.56 runs per game after the trade deadline. Before that, the Nats offense scored 3.82 runs per game. While that doesn’t sound like a lot, that’s 42 fewer runs at that pace over a full season. Balance is a key. League average was 4.31 runs per game. The Nats have to improve on scoring more runs at the same time as preventing runs on the pitching/defense.

Clearly, there is much to be decided on the final roster, and much of that will be due to final moves on acquisitions as well as seeing what certain players show in Spring Training. If there is ever a year for a position player to step up and grab a spot, it will be on this 2023 roster. Keeping the spot is a whole lot different as Yadiel Hernandez found out with his recent DFA and minor league assignment. There are few guarantees for those players that are not on those lucrative long-term deals. All-in-all, Rizzo and Martinez will have to work-out the balance on the roster to keep a great defense while scoring runs.