Joey Meneses was named to the Topps All-Star Rookie team! 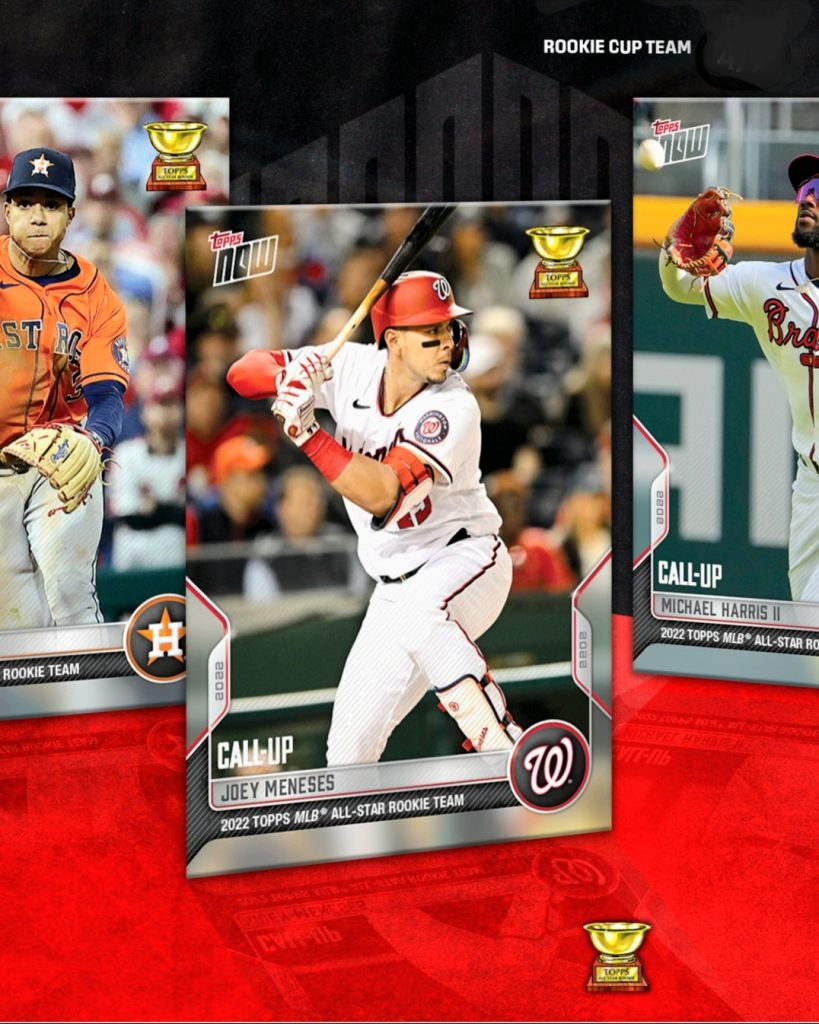 While Joey Meneses led all qualified 2022 MLB rookies in many key offensive categories including batting average, slugging, OPS, OPS+, wOBA, and wRC+, he did not receive one Rookie of the Year vote across all ballots from first place to third place. Nobody with a brain thought Meneses had a chance to win the ROY, but a vote or two on that third place ballot would have been a fitting nod to one of the best 56-game spans for a rookie, ever.

Last week, Topps baseball voted Meneses to their All-Star Rookie team for the top position players, DH, and pitchers in 2022. The team is comprised of a dozen of the biggest stars among the rookie ranks, and he will get the prestigious rookie crown on all of his Topps rookie cards that are produced.

Even the 30-year-old’s manager, Dave Martinez, threw some shade on what he would get from Meneses when he was called up to the Majors to replace Juan Soto when he was traded.

“I said this guy could be legit, you know, I don’t know but and we get him in the big leagues,” said Martinez who also had his own concerns if Meneses was the real deal.

What Martinez loved was that his rookie adjusted to the adjustments that opposing pitchers made on him. While a 56-game sample size doesn’t define a career unless you’re Joe DiMaggio of course, but Meneses will get his shot to start for the Washington Nationals in 2023 to show that his 2022 campaign wasn’t a mirage.

Nats fans had every reason to be skeptical of CabaJoey’s barrage on opposing pitchers because they lived through Rick Short, Brendan Harris, Kory Casto, Zach Walters, Chris Marrero, and of course Carter Kieboom. Short and Ted Williams have something in common — they both finished a season batting .400 or over. Walters was batting .500 through his seventh career game and finished at .375. The larger the sample size, the more a player is tested and most don’t successfully adjust to the opposing pitcher’s adjustments. Meneses did, and that is a reason for some optimism.

But still, the skeptics will question why a 30 year old rookie never came up earlier. Why did he languish for so long at the minor league level? Meneses said, “Freddie Freeman.” When the Nats’ rookie was in the Braves’ system, he was blocked by Freeman at a time that there wasn’t a designated hitter, and Meneses was thought to be a first baseman. Same in the Phillies’ system behind Rhys Hoskins. The Nats had Meneses playing the outfield and first base, and it worked out well because he took over right field from Soto when the blockbuster trade went down. Meneses ended up splitting time between the outfield and first base in 2022.

The Nats hot streak started the day that CJ Abrams was called up to join Keibert Ruiz and Meneses. In the sixteen games that Abrams, Meneses, and Ruiz started together — the team went 9-7 (.563 winning percentage) and finally the pitching staff was looking like they were good. Much of that could be attributed to the new infield defense that ranked sixth in the Majors in that span from dead last in the 116 games before.

In that 16-game stretch, the Nats were beating mostly postseason teams including the Seattle Mariners (1), New York Mets (2), St. Louis Cardinals (2), and the San Diego Padres (2). In fact 78 percent of the wins were against playoff teams. How? Maybe there was finally a change of mindset that started with a competent infield behind the pitchers and a catcher who was calling a good game, plus an offense that seemed motivated.

Born in 1992, Meneses is thirty years of age just like Aaron Judge — and nobody is skeptical of the Yankees’ star or the mega record $40 million a year contract that he signed last week. Okay, besides age and the longitude of Linden, California where Judge was born isn’t too dissimilar from Culiacán, Mexico where Meneses was born, their childhoods and paths to the Majors were so divergent. While we all expect Judge to have a better 2023 season than Meneses, it will be fun to watch our guy and see what he is capable of doing in a full season.

Over the course of his professional career, Meneses has split time between minor league teams, and international teams from Mexico to Japan to small towns you’ve never heard of like Pearl, Mississippi where mosquitoes are the size of butterflies but dreams are larger. Meneses always thought he was worthy years ago of a call-up, but general manager Mike Rizzo was the first to give him a shot.

On the Meneses résumé is an NL East tour that started with the Atlanta Braves organization in 2011 as a teenager. He made it to the Philadelphia Phillies minor leagues in 2018 where Meneses won their MiLB MVP award. These were minor league jaunts that kept the dream alive. After the Phillies cut him loose, he played for the Orix Buffaloes of Japan and teammates with former Nats first-rounder Marrero. Japan didn’t work for Meneses, and he returned to North America.

CabaJoey put up much bigger stats than the 23 year old, future Hall of Famer, that he replaced on the roster. But we know that he’s no Soto. He is Meneses. We know it’s only 56 games and 240 plate appearances, and he’s no DiMaggio. We just don’t know what comes next. We know from experience that these numbers cannot be sustainable in full season, or can they?

Teams stay skeptical of giving players older than 26 a first chance. Jayson Werth was cut loose by the Dodgers at 27, but he got another chance because of that 1st round pedigree. Meneses was a mutt in the eyes of evaluators. But he was at the right place at the right time with the Nats, and the team had no walk-offs of any type in the 2022 season until Meneses delivered on a walk-off home run on September 1.

Much like Yadiel Hernandez, this was a great opportunity for an older rookie. But we saw what happened to Hernandez with his recent DFA and assignment back to Triple-A. You have to stay hungry and remember those mosquitoes from Pearl, Mississippi, and those fans who booed you in Reading, Pennsylvania. As soon as you get complacent thinking they need you, it’s over at that point. You need them, and you’re only as good to them as your last hit when you aren’t playing on a lucrative multi-year contract.

Meneses will be one of the stories of 2023. We expect that as of now he is the starting first baseman, but nobody would be surprised if he ends up in left field to start the season. Time will tell as the final roster firms up. We are just about 100-days from Opening Day of 2023!