Going Deep with The Nats 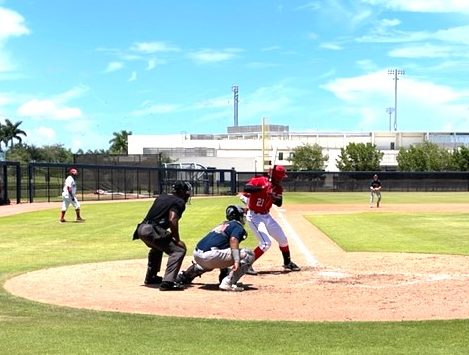 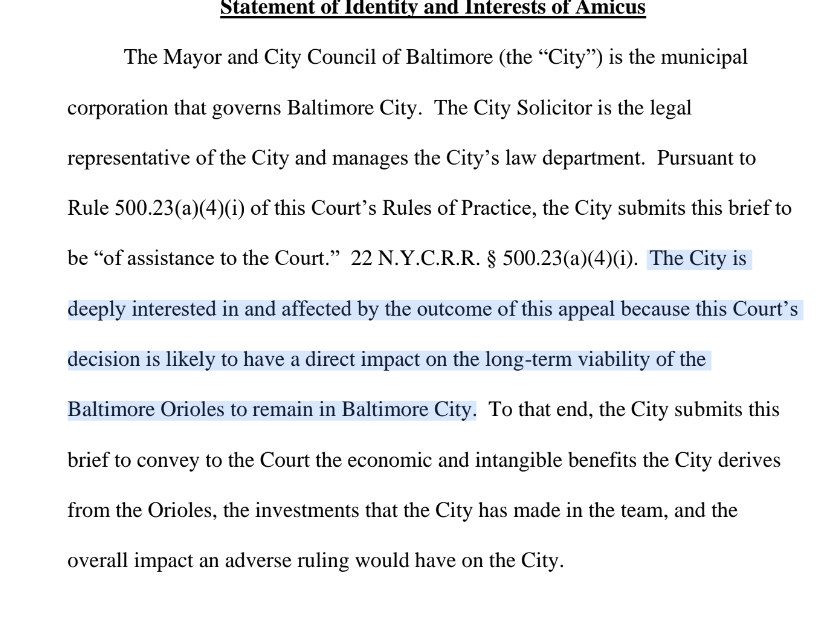 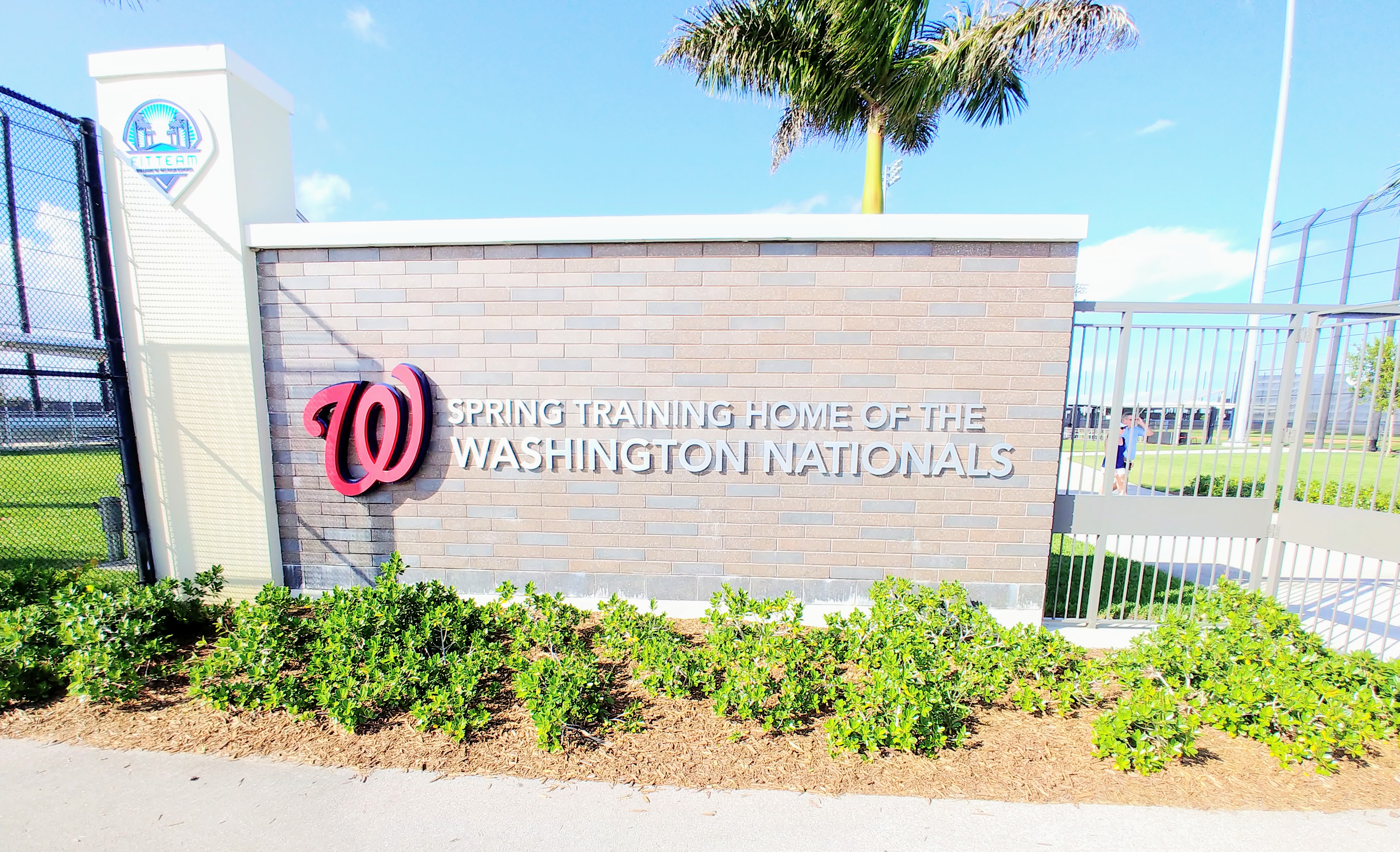 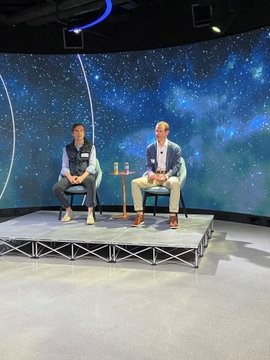 by ArVaFan aka Laura Peebles

Your #1 source for Nats talk, updates and insider information!

On July 29 of last year, first round pick Elijah Green was at Nationals Park to sign his contract. The first player who greeted Green in the Washington Nationals‘ clubhouse was Juan Soto. It felt like a passing of the torch. There was no secret at that point that Soto was going to be traded. Crudely, it felt like it was — in with the new and out with the old. But not so fast, never believe a door is shut to the old ones in baseball, and Soto will be far from old when he is eligible for free agency after next season. You just never know. END_OF_DOCUMENT_TOKEN_TO_BE_REPLACED

Is Baltimore a Viable MLB Market without MASN fees?

The seemingly never-ending MASN lawsuit just got interesting again, on January 12th the Mayor and City Council of Baltimore submitted an amicus brief to the NY State Court of Appeals indicating that the “long-term viability” of the Orioles in Baltimore is at stake in the case (see images below). This is certainly a major development in this ongoing legal drama that has now spanned nearly a decade in time on one core issue that Angelos does not want to pay the Nationals the “fair market value” awarded. These last-minute maneuvers are drastically upping the consequences of the final ruling. Then on January 16th Orioles team owner John Angelos made a statement contradicting the claims as laid out in the brief: “The Orioles are going to be here for the long-term, we have been here and I’ve said many times, publicly, unsolicited, unprompted, we’re never going anywhere”. END_OF_DOCUMENT_TOKEN_TO_BE_REPLACED 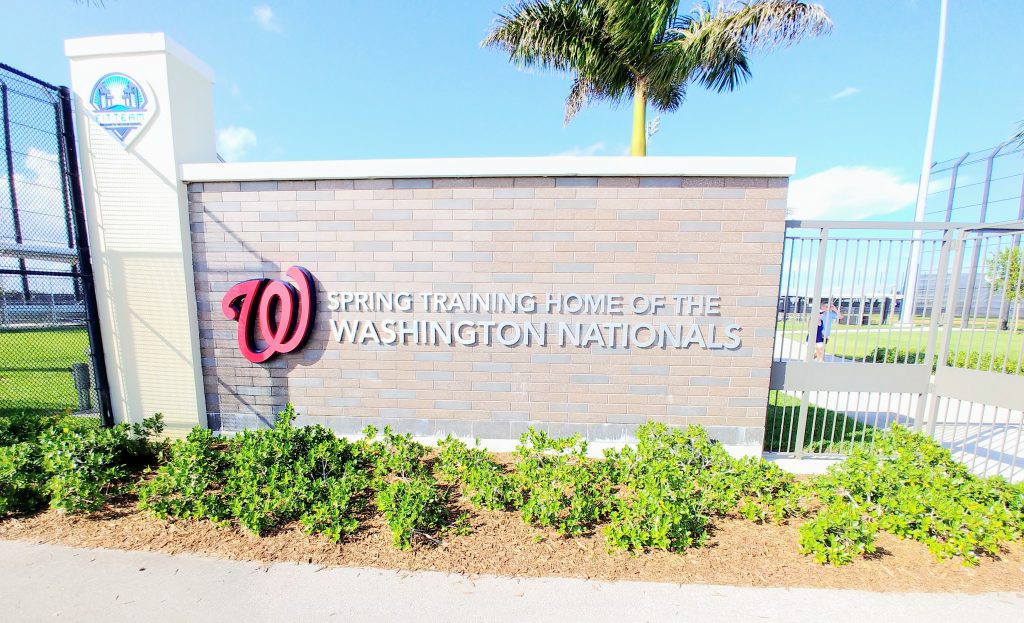 The offseason ends in two weeks as the Washington Nationals officially welcome pitchers and catchers to open Spring Training camp! This is an offseason that many could not wait to end. When you do not make the postseason, the offseason gets lengthened to four and a half months — far too long, and this one was muddied by the ownership for-sale debacle. The additions to the roster through free agency, Rule-5, and waiver claims, won’t move the needle enough to contend for the postseason, rather 2023 will be about competing as a team in a rebuild mode and watching the progress of the Nats’ top prospects in the team’s minor league system. END_OF_DOCUMENT_TOKEN_TO_BE_REPLACED

Posted on January 31, 2023 by ArVaFan aka Laura Peebles

It was the annual SABR (Society for American Baseball Research) Day in Washington, DC over the weekend. This article was all done from notes on my phone, so if anyone else was there, feel free to make additions (or corrections) in the comments. END_OF_DOCUMENT_TOKEN_TO_BE_REPLACED 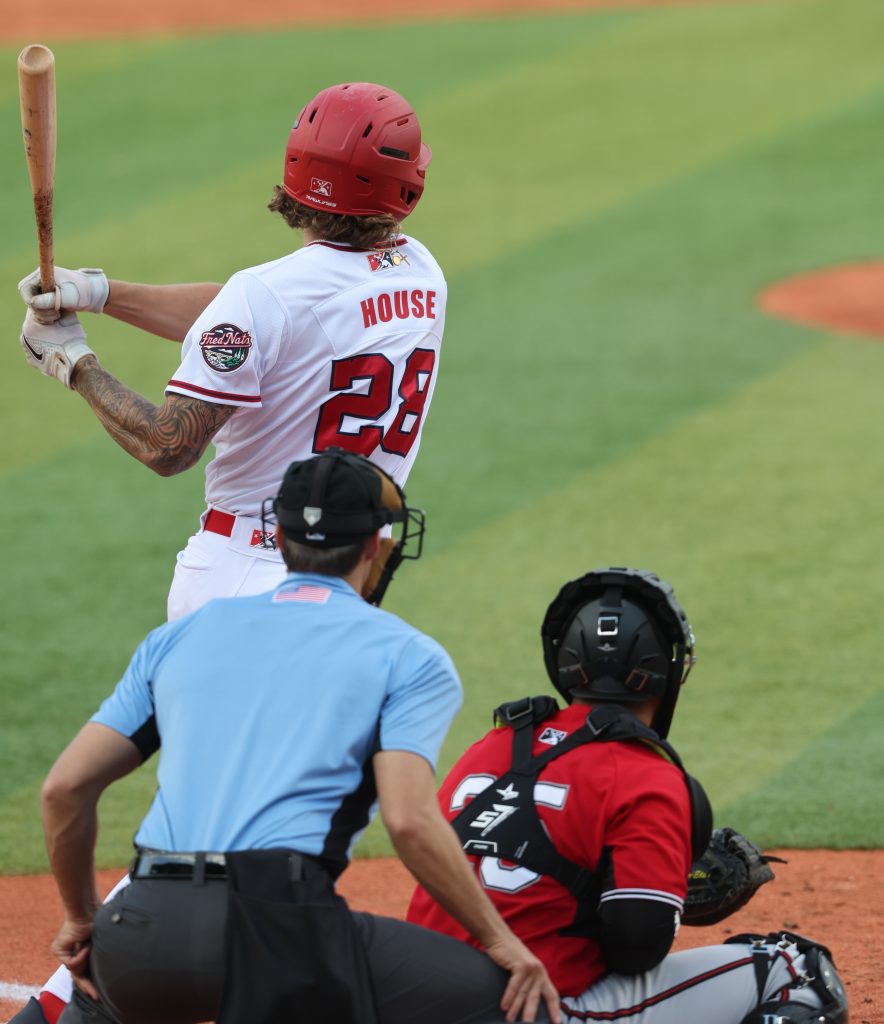 After the Washington Nationals’ general manager, Mike Rizzo, called this the best prospect grouping he has ever had in his tenure with the Nats, it was good to see Keith Law of The Athletic rank five Nats’ prospects in his Top-100 including Brady House. END_OF_DOCUMENT_TOKEN_TO_BE_REPLACED

Mike Rizzo and Davey Martinez give the State of the Team address! 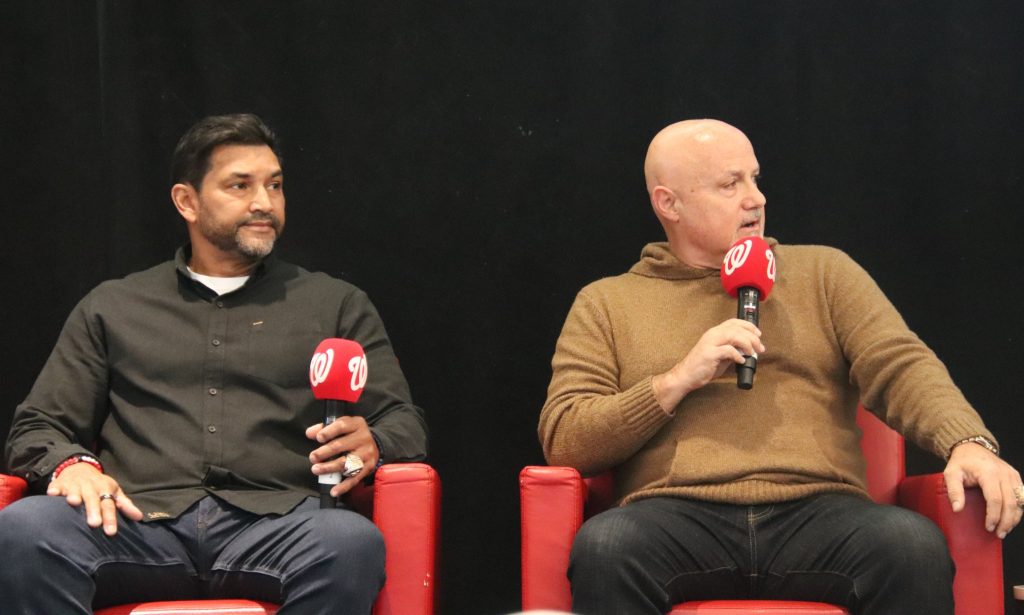 When the Washington Nationals‘ general manager, Mike Rizzo, spoke at the Hot Stove event for full-season ticket holders this weekend, he said you cannot fool smart baseball fans and sell them on something that isn’t there. He was clear that the team was in a retool/rebuild, and that he would not venture to guess on how many wins the team would get this year. After mistakes in the last offseason when he built a team that was severely lacking in defense, Rizzo vowed, uh promised, to use his exact wording, that the defense would be better.  END_OF_DOCUMENT_TOKEN_TO_BE_REPLACED

Use the BaseballSavant Site to Review any Nats Game 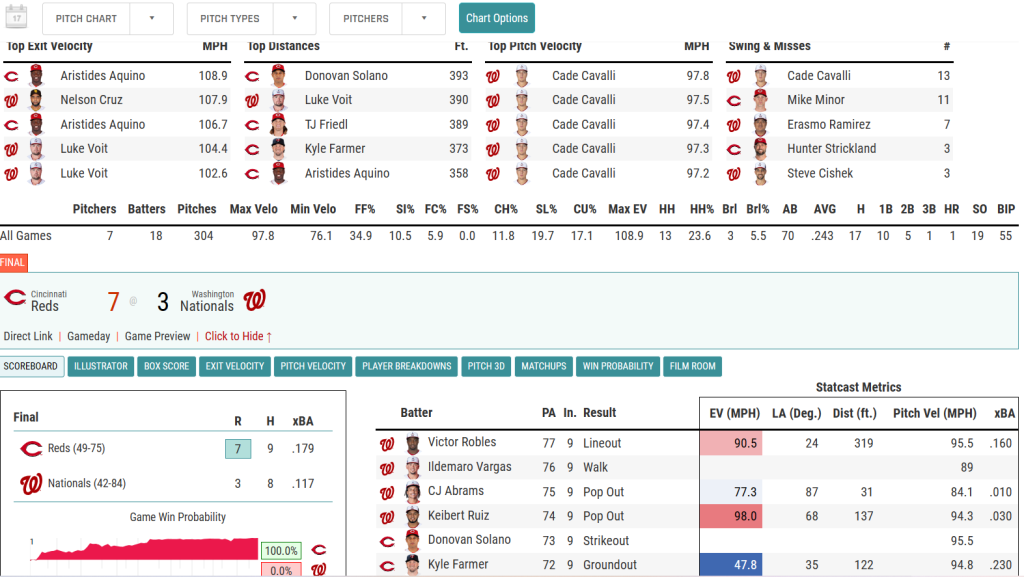 The BaseballSavant site provides an incredible array of data and graphs. Virtually anything you want to know can be found there. I had frankly forgotten how useful it is until I stumbled upon it yesterday looking for information on Cade Cavalli‘s pitch selection in his one major league game. Two different ways to access the site, specifically to review Nationals games are described below. END_OF_DOCUMENT_TOKEN_TO_BE_REPLACED 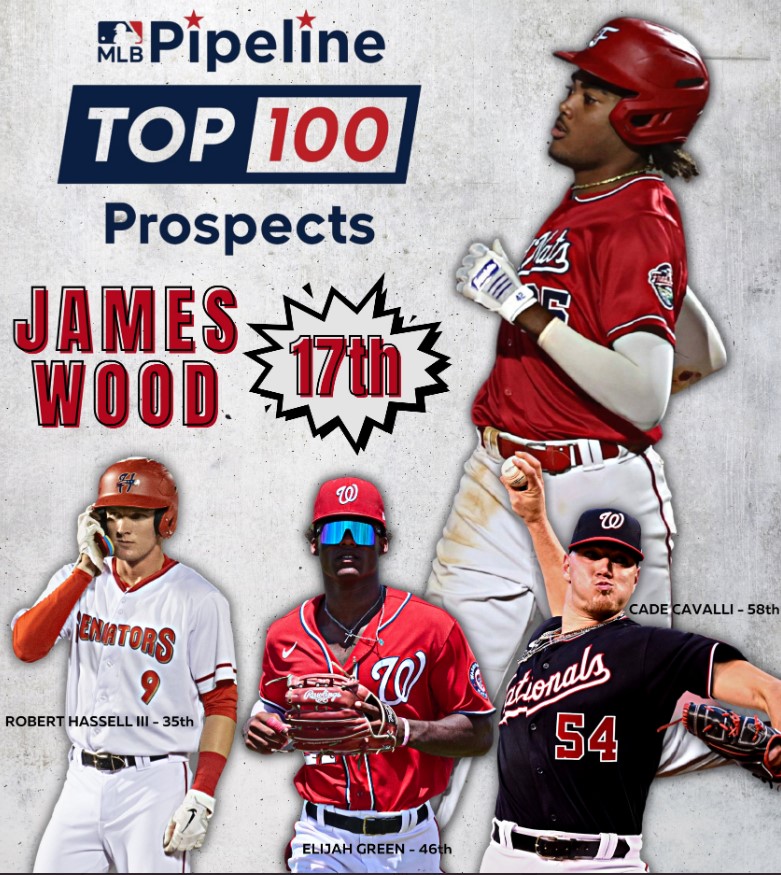 From Nats Farm for TalkNats

The current farm system of the Washington Nationals has been ranked anywhere from №8 to №15  depending on where you look. The team moved into the top half of baseball after the trade of Juan Soto for an exciting package of top prospects. Depending on which ranking system you look at, the top prospects have James Wood, Elijah Green, Robert Hassell III, Cade Cavalli, and Brady House plus some exciting names after them with Cristhian Vaquero, Armando Cruz, Jarlin Susana, Jeremy De La Rosa, T.J. White, and Jackson Rutledge. END_OF_DOCUMENT_TOKEN_TO_BE_REPLACED 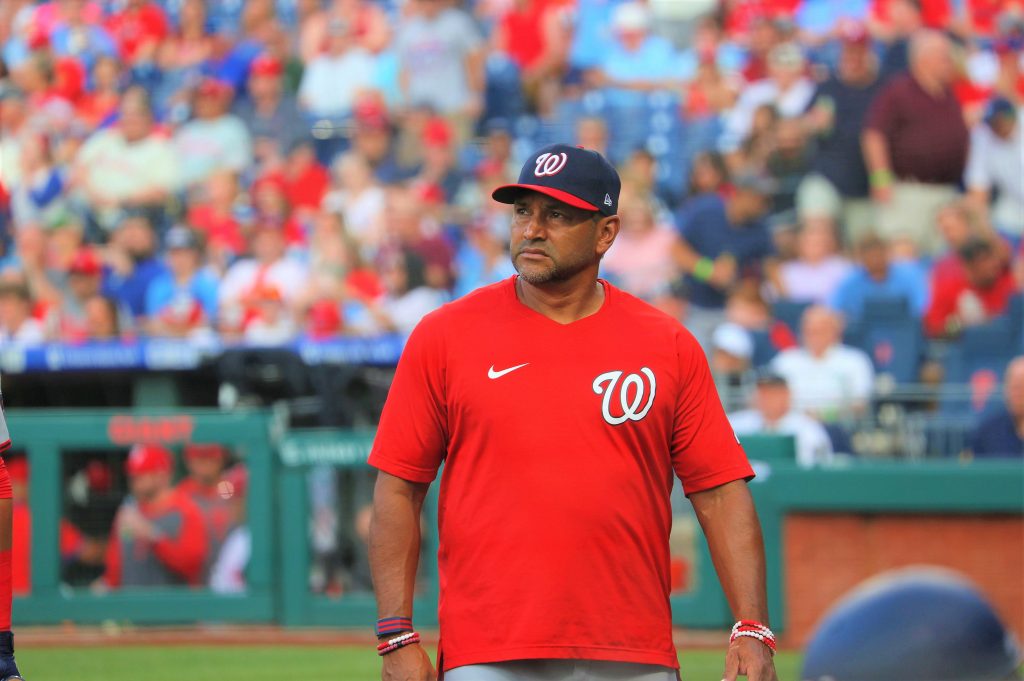 It was October 18th, 1968. Major league baseball held its expansion draft to build the initial rosters for the Expos, Padres, Royals and the Seattle Pilots. The four new MLB teams were allowed to pick unprotected players from the other teams in their league only (The 2 leagues operated as separate entities with their own league presidents. Interleague play was decades away).

Unlike recent drafts, teams got to protect pretty much anyone except over-the-hill vets, and the never-has-been prospects etc. It was not a great haul for any of the four new teams.  I recall a quote I heard back then but I can’t remember who said it : ‘Thanksgiving is coming and the Expos and Padres just got 25 turkeys each’.  The weak expansion draft system had the expected results and both the Expos and Padres won only 52 games in their initial year. END_OF_DOCUMENT_TOKEN_TO_BE_REPLACED 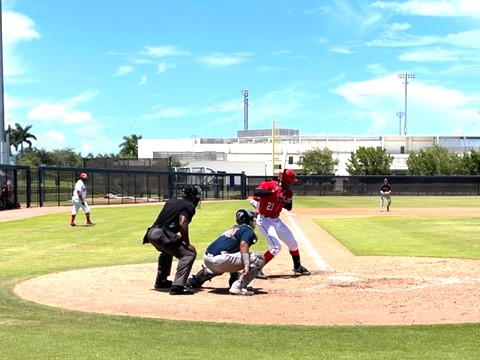 Photo by Forensicane for TalkNats

The strength of the future team for the Washington Nationals appears to be in their outfield. But certainly some could argue an infield of Brady House, CJ Abrams, Luis Garcia, and T.J. White could be very good too with Armando Cruz in the mix. Today, MLB Pipeline published their list of the Top-10 outfield prospects in all of baseball with some honorable mentions, and the Nats were all over the rankings. END_OF_DOCUMENT_TOKEN_TO_BE_REPLACED