The Core Six is now the Core Four; Strasburg is a Nat for life and is it time to extend the other three? 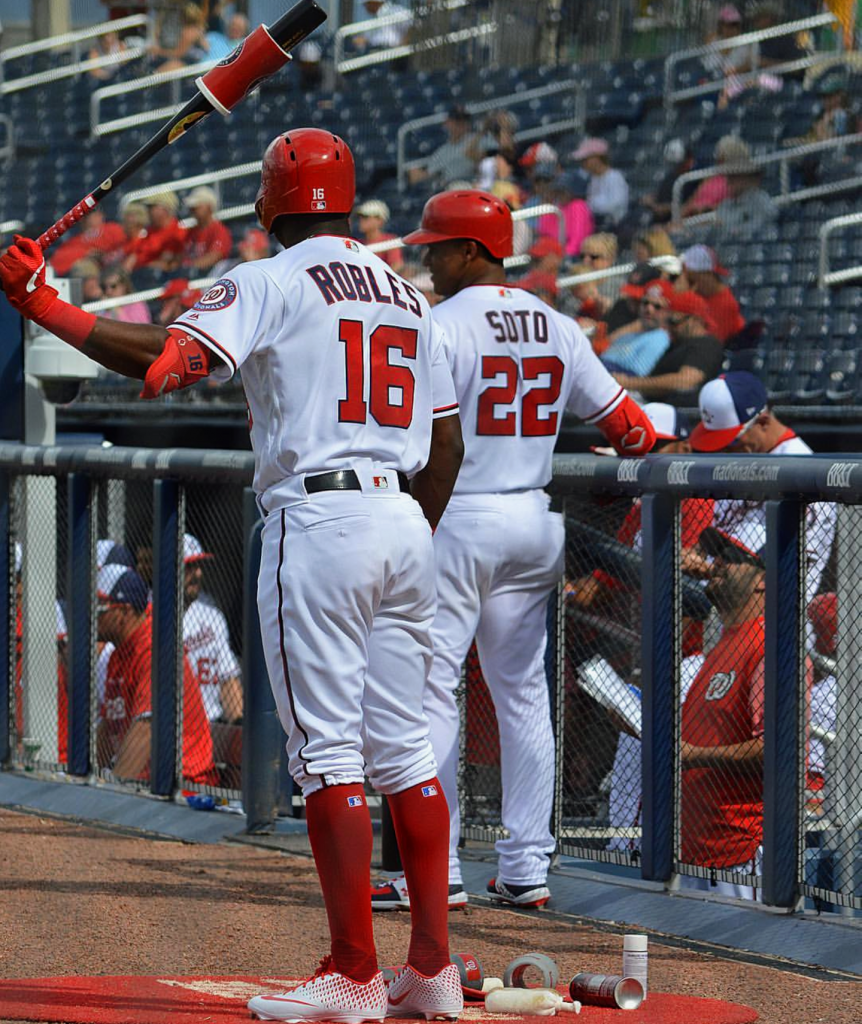 Get used to seeing these guys for a while, but what about Nats for life? (Photo by Tom Cicotello for TalkNats)

Baseball free agency allows players to choose their future employers much like the private sector. While the grass may not be greener on the other side, sometimes it is, and also the avenue to higher income. Corporations that covet top talent have used creative methods to retain their superstars by offering vesting stock options, upward mobility, trips, homes, and other perks. Loyalties do go both ways. The Lerners wanted to make Ian Desmond a “Nat for life” like they did with Ryan Zimmerman, and have now done with Stephen Strasburg. As Mike Rizzo has said numerous times, “It takes two to tango.” Yes, both sides have to agree to dance. Anthony Rendon and Bryce Harper both departed after they received reported contract offers of $210 million and $300 million respectively. What have we learned about the players who have stayed and the players who have left?

We have learned that you cannot force players to stay, and in some cases it is all about the money. Maybe timing is part of it. Maybe luck is part of it. Maybe greed is part of it. One thing we know is that there are multiple reasons sometimes, and if you look at Ian Desmond’s situation, he turned down the Nats offer and then had second thoughts. Desi asked bench coach Randy Knorr, “Did I make a mistake [turning down the deal].” For Desi, it was a deal reportedly worth near $107 million, and he never reached that level of compensation in free agency or the level of belonging with those other teams. In Ian’s case, the grass was not necessarily greener on the other side.

Now, the Nationals and general manager Mike Rizzo should dig deep and decide if they should try to lock up players earlier like the Braves have done with core players. Okay, the Braves have done their extensions by grossly underpaying core players versus projected market values, and Nats players do not seem willing to give bargain prices. The three core young players who need to be extended are Trea Turner, Juan Soto, and Victor Robles. They are represented by three different agents at CAA, Boras Corp, and Wasserman. Immediately the first thought is Juan Soto and his agent Scott Boras would not do it, and they certainly are not going to give a Ronald Acuna deal like the Braves got at 8 yrs/$100M (2019-2026) with two team options at only $17 million each.

Rizzo is correct. Soto would be looking for double or triple what Acuna got even though Fangraphs has so far favored Acuna as a more valuable player. There was also Christian Yelich who signed a long-term deal when he was with the Marlins, but he did not have the Acuna projectory at the time.

Madison Bumgarner also locked in early to a long-term deal with the Giants and while he left money on the table as it turned out, he just cashed in again on his first free agent deal and once again decided that money is not everything and took a bargain deal to go to Arizona. So money is not everything and Bum has three World Series rings from his former team that is now in a rebuilding mode and did not want to bid seriously to retain him. Again, Bumgarner is not a Boras client.

“I don’t think a player who is four, five years away from free agency is spooked,” Boras says. “I think they’re getting advice and counsel that this amount of money is significant for them, and they’re looking at the money but not their value.”

That seemed to be the case with Ozzie Albies in particular with the Braves who are only paying him an average of $5 million a year for the next seven years plus they hold team options beyond that for two years for $7 million a year.

“I would have f#cking taken the [Albies] money. But at the same time, I feel like the offer should have been higher,” Jarrod Dyson said. “That’s just me, personally. I see a lot of guys who ain’t better than [Albies] making more money than he got.  I don’t care if you’re black, blue or whatever color, you take care of your guy because the last thing you want is your guy questioning everything that he accepted and having to hear all that negative talk. Oh, you signed a deal that was terrible. I mean, a man’s trying to feed his family, but at the same time, the [Braves] owners knew what they was doing.”

David Meter of the SportsMeter agency is Albies agent, and who knows what he was thinking. He also reps Craig Kimbrel who was a hold-out last year as a free agent and eventually signed mid-season with the Cubs. Albies won’t be going poor, but he also did not get what Dyson and others felt was close to his true value.

Hometown discounts are great for the team when you like your lawn at your home. But you also have to be fair with your own players, and the Braves are nowhere near going over the CBT cap which is a major obstacle for the Nationals in offering long-term deals to minimum salary players. They can’t extend everyone now, but there is room to creatively take care of Turner now. He is under Nats control for 2020, 2021 and 2022, and then set for free agency. So how do you tie him up and not bust the cap?

“If the deal’s right, if I like it, I’m not scared to take [an extension],” Turner told NBC Sports Washington. “Same thing, if it’s not right, I’m not going to settle. Everyone I think knows their worth, [they] at least think they’re worth something — whatever that is, high, low, willing to take less or try to get more.

“For me, I’m all ears. I’ll listen and communicate. At the end of the day, I like it here. I don’t think the grass is always greener on the other side, per se, and I’m happy where I’m at. If it comes to that, I’ll be happy to play here hopefully my entire career if they’ll let me. But, I’m also weighing all options. I think everybody should. If you don’t listen, I think it’s a little foolish.”

What would I offer Trea? Six years at $105 million plus a one-time team vesting option at $100 million for four more years. The vesting option would be an easy to reach number making it nearly automatic to vest. The first part of the contract is $17.5 million on average for Turner to buy out his final two arbitration years and four years of free agency. By doing a team option, the AAV is controlled. Turner will be 28 mid-season next year so that contract would make him a Nats player for life.

Get that deal done for Turner then work on Soto and Robles. In the meantime, Ryan Zimmerman does want to play this season for the Nats or he said he would retire. He spoke yesterday at the Washington Capitals training facility after he suited up as a hockey goalie.

“We’ve talked,” Zimmerman said about a meeting last week with Rizzo. “We are continuing to talk. I’ve made my intentions pretty clear. They know where I stand, and we know where they stand. We’ve been going back and forth the last couple weeks. I’m sure something will happen. It’s just a matter of time.”

To put it all in perspective for young players who commit to their teams before free agency, Paul Goldschmidt of the Cardinals signed an extension with the team last season.

“It’s only [a] team-friendly [deal] if you play well. Every contract, as soon as you stop playing well, then it’s a bad contract. So it’s kind of this weird situation,”  Goldschmidt said.

So true Mr. Goldschmidt. Not every extension pays off for the team. Just ask Mike Rizzo about Ryan Zimmerman’s deal which turned out to be an overpay and might be why he is hesitant to do another one for a position player.

“Some work out, some don’t,” says Alex Anthopoulos who is the Braves GM.

The Nats still owe Zim ten million more in a five year personal services deal which was allowed in the CBT and not subject to AAV. That was before. Now teams have to include that in their CBT payroll.

This entry was posted in DaveMartinez, Feature, Lerners, Roster. Bookmark the permalink.
← Previous Article | Next Article →