FanGraphs 2023 projections for the Nats offense! 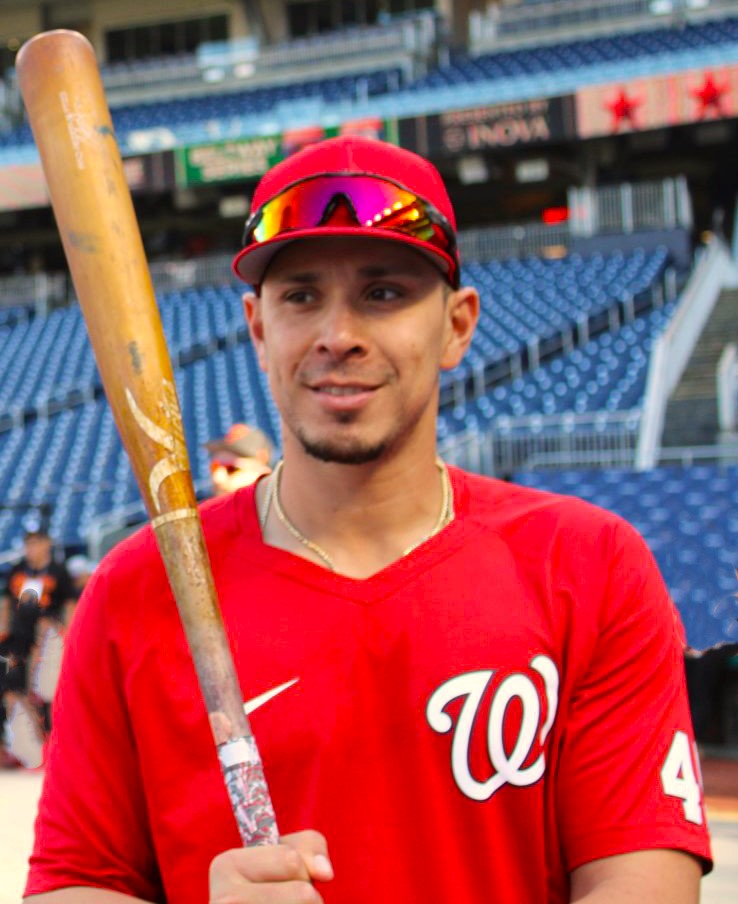 When you look at the FanGraphs projections on the 2023 Washington Nationals, you might say they are aggressively optimistic on every projected starter — EXCEPT Joey Meneses. Overall, that is good news for the team if this is accurate.

The chart (below) kind of tells the story with CJ Abrams as the top improvement of +2.9 WAR from last year to this year. While Meneses shows WAR improvement, based on extrapolation, it is easy to see that they project a marked decline in his full season this year. They show “The Menace” at 602 plate appearances compared to his actual of 240 last year. Since WAR is a cumulative number, you can see that FanGraphs does not expect Meneses to produce at anywhere close to that .930 OPS level of last year. By the way, Baseball Reference is a little more bullish on Meneses and has him at an .816 OPS for 2023.

Obviously, some players will do better than the FanGraphs projections, and some will do worse. It is the line of players below Victor Robles that we would question the most. Carter Kieboom has never had a positive WAR season, yet here they are for the fifth consecutive year pasting up positive WAR for Kieboom. Of course we hope it happens. The same for Riley Adams who was a -1.2 WAR last year in 48 games. What is Adams going to do to turn that around? Will this be the year that Luis Garcia turns into a positive contributor for the team? There are many questions here, and that is fine. This is a transitional year. 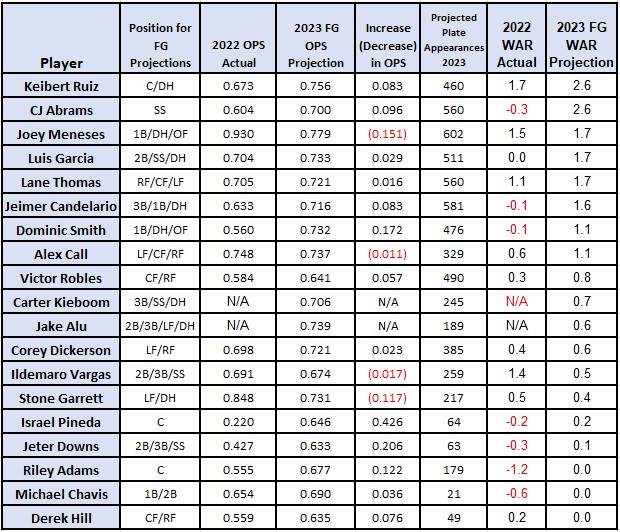 Graphic by P. Dowdy for TalkNats; Data from FanGraphs

If the FanGraphs projections are anywhere close to accurate, the Nats should win the 69 games that FanGraphs is projecting. Maybe with some luck in the pythagorean, the team wins more than 69 games. This is shaping up to be one of the most important years in Nats’ history. The team seems to be pushing their advertising around the long-term pieces on the MLB roster with Josiah Gray, Abrams, and Keibert Ruiz. A quick look at the team’s promotions for 2023 reveals they are the three player bobbleheads this year.

A new core is emerging but none have achieved superstar status to this point. But if you look hard enough you can see the potential. Those core position players could also include Garcia, and pitchers Cade Cavalli and MacKenzie Gore.

The FanGraphs projection also has Jake Alu with 189 plate appearances in 2023. Another interesting name on there is Jeter Downs. He was the Reds first round pick in 2017 and traded to the Dodgers then to the Red Sox in the Mookie Betts trade. Downs was also traded with Gray from the Reds to the Dodgers in 2018 in a blockbuster deal. The Nats picked him up for free in a waiver claim last month from the Red Sox.

The other name from a waiver claim on that list is Stone Garrett, and he could definitely be in the outfield mix. Besides Cavalli, there are no mega star prospects on that list, and of course he is on the pitcher’s list that we will discuss another day. There is a chance that mega star prospect Robert Hassell III could emerge from the pack as he will begin his season in Double-A. Hassell was the #22 ranked prospect last year with Baseball America.

Otherwise it could be some NRIs and other minor league callups factoring into the mix and FanGraphs names Michael Chavis and Derek Hill as two more players that will get some big league time in 2023 for Washington. Of note, Matt Adams who was signed to a minor league deal last month by the Nats was taken off of the FanGraphs projections after Dominic Smith was signed.

Besides catcher Israel Pineda, Downs, and Adams, it is Smith who is shown as the biggest mover in OPS in a positive direction of the projected starting players on that FanGraphs chart at 172 points. There are certainly a few bounceback candidates on that list. And there are plenty of players listed that have 80+ point OPS improvements projected like Ruiz, Abrams, Jeimer Candelario, and Kieboom.

If you want some optimism, the Nats scored 122 runs from August 15 to September 17 in 29 games without Juan Soto and Josh Bell in games — and primarily with Meneses, Ruiz, and Abrams. They scored an average of 4.21 runs a game in that span, and went 13-16 which was a .449 winning percentage and a 73-win pace over a full-season. That’s a fairly large sample size and almost 20 percent of the season. Abrams arrival coupled with sound defense, and Meneses coming up with clutch hits seemed to turn the season around. Yes, the team was 9-7 when Ruiz started with Abrams and Meneses. That “hot streak” was halted when Ruiz was injured with a testicular contusion that ended his season prematurely.

So yes, there are reasons for optimism even though FanGraphs is projecting 4.10 runs per game for the 2023 Nats’ offense. Can we all agree that the 2023 projected Nats’ roster looks a lot better than that August roster? The key could be Meneses or maybe success will come from some of the other players stepping up. It’s a team game, but also a sport dominated by stars. The Nats need that star power and in 2023 need some stars to twinkle bright.