Armando Cruz is a TalkNats’ Top-10 prospect; Here is what he told us in his first interview! 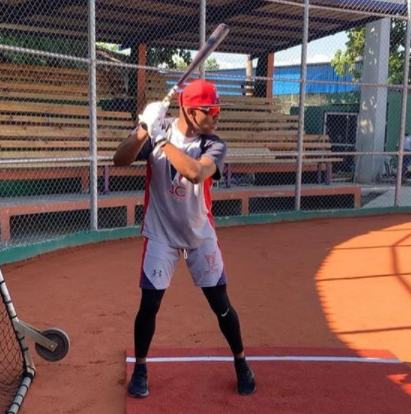 Obviously it is too soon for Baseball America to include this year’s signings from international free agency in their rankings, but we have been saving the № 10 spot in our Washington Nationals overall prospect rankings for Armando Cruz. His friends call him El Mago (the magician) for his defensive wizardry. We had the chance to talk to this young man today for his first ever interview in the U.S.

With a birthday a few weeks ago, Cruz just turned 17 and is hard at work to keep improving. Cruz ranked № 2 in the projected amount paid ($3.9 million) in a signing bonus among all of the international free agents according to Baseball America. On MLB Pipeline’s list, Cruz ranks 4th overall among all of the prospects in this international signings class.

“Well I feel super super happy and grateful for the opportunity that the Washington Nationals gave me to be a professional player and to take my first step,” Cruz told me. “I want to thank the organization for taking my talent into account.”

While scouts and evaluators were unanimous on Cruz’s excellent defensive abilities, there was a split on how they see Cruz in the batter’s box. Some would describe his swing as easy and it needs to evolve to get some more torque behind it. But videos show that he is generating power and hitting balls over the fence with a swing that is focused on contact.

“I am very focused on my hitting and trying to always improve every day and adjust in the little things that I am missing to continue developing and polishing my hitting,” Cruz continued.

Yes, the little things. The kid already gets it. Given that he is the same age as High School juniors in the United States, he would be a first round pick in the 2022 draft if he was a U.S. citizen. This teenager will continue to grow from his current 170 pounds and add size and muscle which will add additional power. Think of where Jeremy De La Rosa was in size and shape at the same age.

Despite his obvious and massive upside potential, Cruz’s signing isn’t very likely to shift the MLB baseball odds today or even tomorrow. He is still young, untested at the professional level, and has yet to physically grow into a role. However, his talent is not to be ignored.

Report: The Nationals signed Cruz, with a reported bonus of $3.9 million. He’s a defensive wizard with phenomenal hands and a strong arm, combining the ability to make acrobatic, highlight plays along with the internal clock and game savvy well beyond his years. There’s more of a split camp on his offensive potential, but Cruz has a chance to be an elite defensive shortstop. He trains with John Carmona. 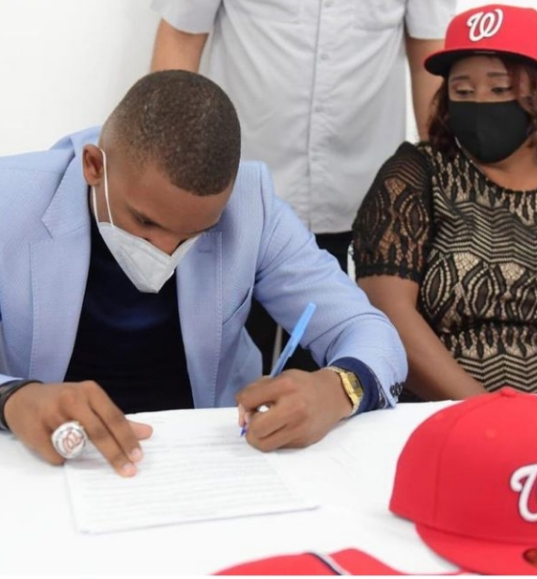 Aramando Cruz signs for the cameras; Photo from Baseball America

If you want to see some defense, enjoy the video inside this tweet:

Because of the work of  Nats’ Vice President, Assistant General Manager of International Operations Johnny DiPuglia and his staff, the Nationals had a relationship with Cruz over a year and a half ago we were told by a source. The international market still operates on different rules from the U.S. amateur market. In international waters, players are agreeing to deals sometimes before they reach puberty. Yes, 13-year-old boys have agreed to deals with MLB teams in the Dominican Republic — but the deals cannot become official until the player is at least 16 years of age or will turn 16 years of age prior to September 1 of the current signing period.

There is obviously shared risk when you sign players at these ages. Think how small the percentages of High School kids from the first round of the Stephen Strasburg‘s 2009 draft fared. Only 2-of-20 high schoolers are over a 10.0 WAR today and one is Mike Trout and the other is Zack Wheeler. And that was a productive draft from almost a dozen years ago. Compare that to College kids from that same draft, 5-of-29 were over a 10.0 WAR. That is 17.2% to 10% in comparison. That margin of first round draft failure is typical we have found over a larger period of time.

Now compare DiPuglia’s equivalent of what he has spent on players in the international market, and he is blowing away the value of the amateur draft given just Juan Soto‘s success and his 11.0 WAR in his career from FanGraphs.

Once an international free agent commits to an MLB team, they are no longer allowed to work-out for other teams and play at showcases. The one thing these players have to do is to make sure they do not violate any part of their agreement to make their contract, null and void.

Cruz travelled to the U.S. for Perfect Game showcases in 2017 and 2018 before he committed to the Nats. He had spent almost 8 years at Jhon Carmona’s Javilla Academy. Carmona is a member of MLB’s Trainer Partnership Program, in Santo Domingo in the Dominican Republic.

“Armando arrived at the Javilla Academy at the age of 9 years old … ,” Carmona said. “Competitor by nature with the broad features of becoming a superstar.”

“Affable, friendly, collaborative and in the last two years he has managed to become a natural leader, developing this tool as a conciliator and motivator, being in turn a person with extraordinary emotional stability. Without fear of changes, facing any challenge that is in his way.”

Armando is the youngest in his family, and he is very close with his Grandma Tita and his parents and his extended family.

Carmona told us that Cruz is also a diligent and responsible young man who made school a priority and never missed his classes and never stopped doing his homework even though he knew a big contract with life changing money was coming his way.

“As a high school student, Armando takes English classes at the same time and will soon be fluent and fully bilingual,” Carmona added.

“Because of his intelligence, that places him in a very prominent place in what are his ambitions, … becoming a professional baseball player, reaching the Major Leagues, and one day having his own family, wife and children, while ensuring the future of his parents and siblings, but how he says holding the hand of God, all this without neglecting gratitude, which is one of his greatest virtues, because he recognizes that without the help of others his future will not would be the same.”

“Meritorious son of our Academy which he has placed at the highest in his entire athletic life.”

Because dugout dances are the thing in Washington, Cruz will show the fans his moves as a salsa dancer since it is his favorite music. Carmona says Armando is a spectacular, prominent boy with great personal values, with clear goals, firm and with great determination!

Cruz is disciplined and wakes up early for their practices. Every night he is in bed early at 9:30 pm and up and dressed by 6:30 in the morning, he is dressed and ready for his practice. After lunch, he is in class working towards his degree or taking his English classes. Then he stays after school talking with coaches, office staff, and listens to music or watches ball games.

“He makes responsibility and commitment simple because they are already innately in his behavior,” Carmona said.

All signs are positive for Cruz. You can read the extensive analysis we did on Cruz earlier in the year. One additional note is Cruz is ambidextrous and writes and eats with his left-hand but throws a baseball and bats right-handed. Scouts have raved about Cruz’s intelligence which they say will make him a better player, teammate, and a fan favorite.

“Thank you thank you for doing this interview,” Cruz finished up with us. He is polite and sincere. “We will talk soon.”

Yes, yes we will Armando! We have compiled our entire Top-10 of interviews and will continue towards a Top-15.

This interview came together thanks to Manny Acta‘s family and especially Anayma Acta!  If you enjoyed this article, please show your appreciation with a donation to the Acta’s impACTA Foundation. Thanks and Gracias! https://impactakids.org/about/