Posted on February 11, 2021 by Tom Shafer and Lukas McKnight 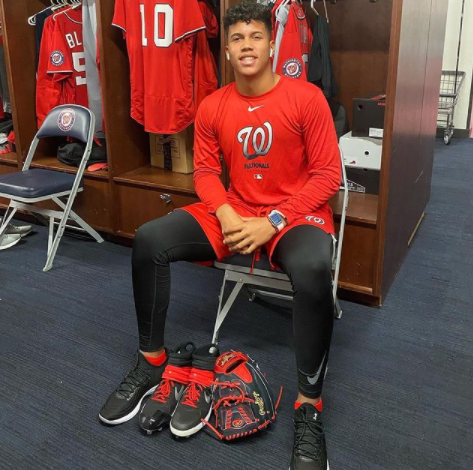 Lara– who turned 18 in January- was part of a vaunted 2019 J2 class under the leadership of International Scouting VP Johnny DiPuglia, signing for $1.25MM as a top 20 prospect in the international signing class. Upon signing, Lara immediately went into the top 10 prospects in the Nationals’ system. You read a lot about him last week on TalkNats and his entrance into the 2021 season as the Nats’ #5 prospect (as rated by Baseball America) despite not having thrown a pitch in an official minor league game.

Where many international pitching projects are signed with the hopes and dreams of what they could become, Lara has a lot more “now” ingredients than other J2 hopefuls. Lara’s build is already sturdy and strong, and while he might not have the higher end projection of some of his counterparts, he’ll grow into a durable build much like his countrymen of Anibal Sanchez or Armando Galarraga.

With said strength, it’s further unique to watch Lara operate with a mindset around executing pitches instead of hunting for velocity- a mindset that’s all-too-common when evaluating young, unpolished amateur pitchers. Lara’s a little deliberate in his delivery, but he gathers well over his back leg and leads well with his front hip as he drives forward. In time, he’ll get a little more aggressive with his drive and his forward move to create more momentum (and velocity) to the plate. He works a little across his body, though not awfully so, and it should be something that improves with help from the coaching staff (for delivery alignment) as well as the strength and conditioning crew (for work with hip flexibility and core strength). From the stretch, Lara tends to work a little too quickly with his slide-step; as a former catcher, I appreciate his giving his battery-mate a chance to throw out a runner, but I’d prefer to see him gather more on his back leg before driving forward in order for his arm (and the rest of his body) to catch up and deliver a more consistent pitch.

There’s little to nitpick about Lara’s throwing stroke- it’s a medium/compact circle in back that avoids too much scap load or a high elbow. His forearm is nearly parallel to the ground at foot-plant (which is ideal), and it allows him to get out front consistently with his pitches (especially when he’s not slide-stepping as mentioned above) and is a positive sign of future health. He’s got solid arm speed and extension out front and he decelerates everything efficiently. His slot is on the lower end of ¾, which is a slot that works for a lot of starting pitchers at the major league level. Again, for a pitcher with the power he has to his stuff, there’s not a ton of effort in how he operates.

Speaking of power- Lara already has a lot of it for a pitcher that would be getting ready for his senior year of high school had he grown up stateside. He’s reportedly already up to 96 and works comfortably in the 92-94 range, which makes it already an ML-ready offering. As mentioned above, his slot is a little lower and it gives his natural heater a little tailing action along with some sink down in the zone. Those around him state he mostly throws a 2-seam fastball, but most MLB development teams are grooming pitchers to throw both a 4-seam and 2-seam fastball- the former to draw swings and misses at the top part of the zone, and the latter to get ground balls pitching down in the zone. While Lara’s natural heater should be one to draw more weak contact than swings and misses, there’s potential for growth with both.

“I am currently throwing, 4-seam fastball, curveball, slider, and a changeup. I still will throw in a few 2-seamers,” Lara told TalkNats last week.

Lara’s breaking ball is a little “slurvy” at the moment with it having some attributes of a vertical breaking curveball and a horizontal breaking slider. That’s not uncommon for a teenage pitcher, though watching the sharpness he gets to his breaker, it’s promising that he’ll have something of solid-to-plus breaking pitch down the line. Whether it morphs into a curveball or slider- or he’s the pitcher that can throw both- is a question that’ll work itself out, but it’s most important that he shows he can get his fingers in front of the ball to make it spin and break with some venom.

Some video from a side angle showed Lara throwing a circle changeup, but there weren’t any thrown in game video to evaluate. Rarely does a power pitcher at Lara’s age have much use for a changeup, so it’s a pitch he’d be expected to develop on his climb towards the nation’s capital.

Last, with Lara’s clean delivery and arm action, he already shows some feel to throw strikes, move his fastball around, and put hitters away with his breaking ball. As mentioned above, he’s not a pitcher that’s simply throwing for the radar guns, and that he can get to his power stuff and already throw regular strikes portends his having at least average control and command down the line.

There’s a lot of promise with Lara, and it’s easy to see why the Nats were enamored enough with what they saw to make a seven-figure commitment to him as a teenager. While there are enough strides he needs to make to prevent my projecting his being a future top of the rotation candidate, I see a well-rounded repertoire and pitcher to envision his being a 3rd or 4th starter in the NL East in the years to come with a FIP in the mid to high 3’s and the ability to pitch 170-190 innings annually. 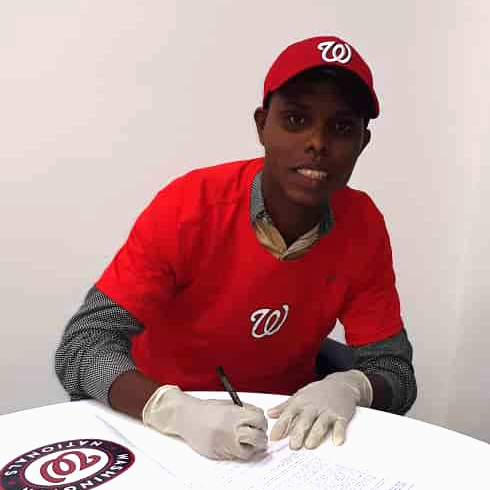 By exceeding their pool in 2016, the Nationals were subject to a two-year penalty for 2017 and 2018, making them ineligible to sign anyone for a bonus amount over $300,000 during those years.  No longer under spending restrictions in 2019, they aggressively pursued Andry Lara in Venezuela, signing a pitcher many organizations considered the number one arm of the 2019 class for $1.25 million.  This year, they went big again in the country locking up fellow Venezuelan righty Gustavo Rivas for $450k, the highest bonus given to any pitcher in the Nationals’ 2020 class.

Rivas is a native of Barcelona, Venezuela which happens to also be the home of two current Major Leaguers: reliever José Álvarez of the Phillies and Twins catcher Willians Astudillo.

Currently, Rivas stands 6’2, weighs 165 lbs. and he doesn’t turn seventeen until November 21st of this year.  He owns a very athletic frame and one that projects well with regard to developing strength, size and durability as he ages.  As far as Major League physical comparisons go, I could envision Rivas someday having a similar-type frame as 6’3/215 lb. Touki Toussant, reliever for the Atlanta Braves.

At first glance, the positives jump out immediately when analyzing Rivas’ video – first being his lean, athletic, loose frame.

It’s also pretty obvious his body moves efficiently, he’s flexible and his arm is super-quick.  I have information from reliable sources that Rivas’ fastball has recently touched 95 MPH.  While hearing this is not completely unheard of with 16 year old pitchers, many times those numbers turn out to be exaggerated – especially so with regard to Venezuelan arms.  I’ll just say based on Rivas’ video, I would not dismiss the possibility of him having already reached the mid-90s with his heater.

Mechanically, Rivas starts his delivery with what’s termed as a half-windup, meaning his hands stay in the middle of his body rather than traveling overhead (which is aptly called a full-windup).  The half-windup generally allows for better balance over the rubber, but mostly it’s a choice based solely on personal preference/comfort level.  In fact, much like a hitter altering his batting stance, some pitchers will have experimented with both half and full-windup deliveries at various points of their careers.

Rivas windup has decent tempo, though he does rush a little through his balance point.  Most, if not all, pitchers will struggle with staying back, fighting the tendency to rush through their deliveries.  This can be caused by experiencing in-game pressure and not having the capacity to slow the game down in the moment.  Again, Rivas is only 16.

Rivas maintains good online direction to the plate, but his stride length is a bit short, limiting his extension to the plate. I would not be shocked if that’s one of the first things he’ll work to improve upon in the professional ranks.  His arm action is clean and – as mentioned – quick.  I would define his arm circle as more on the longer side, but not dramatically so.  When I see his arm work, it’s reminiscent of a young Pedro Strop.

In an interview with Byron Kerr formerly of MASNsports.com, Nationals Assistant GM and VP of International Operations Johnny DiPuglia made a point to mention Rivas’ arm quickness as one of his standout qualities.

“I see him throwing 95 mph plus down the road. He’s a really athletic kid. We really like the arm. It’s one of the quickest arms that we signed since I’ve been here.”

In addition to its potential for plus velocity, Rivas’ fastball also has heavy sinking action. His CB, which reportedly sits in the low 70s, has tight spin and plays well in combination with his FB.  It would not surprise me to see his CB morph into a power, late-breaking SL as he matures.  His third offering is a low 80s CHG which has similar sinking action to that of his FB.  The Nationals have been very impressed with Rivas’ intangibles, complimenting him for his outstanding work ethic in addition to his commitment to improving as a pitcher.

Rivas will almost surely be put on a path towards developing as a future Major League starter with the Nationals Dominican Summer League team.  With him being 16 years old, I foresee that as a very realistic possibility, however I would not be surprised should he eventually develop into a high-octane, upper 90s bullpen arm capable of missing bats and finishing games.  Either way, Rivas is someone to keep tabs on as he moves through the Nats system.

Feel free to check out this recent post featuring another player the Nationals could be eyeing for the 2021 signing period.

Hello there, Nats faithful!  We run a website called Peloteros International where we highlight international baseball prospects. A bit about us personally: we’re both long-time scouts who, through our network of industry insiders, provide readers with unique news, rumors and thorough scouting opinions on international baseball prospects.  While the international amateur market isn’t thought of much by baseball fans outside of the July 2nd signing date (or, January 15th this year), we created the site to shed light on what a vibrant, large, and active scene it is the other 364 days of the year.

Lukas McKnight is on Twitter @LMcK_Baseball and Tom Shafer is @shafertj.  You can read more about us here.