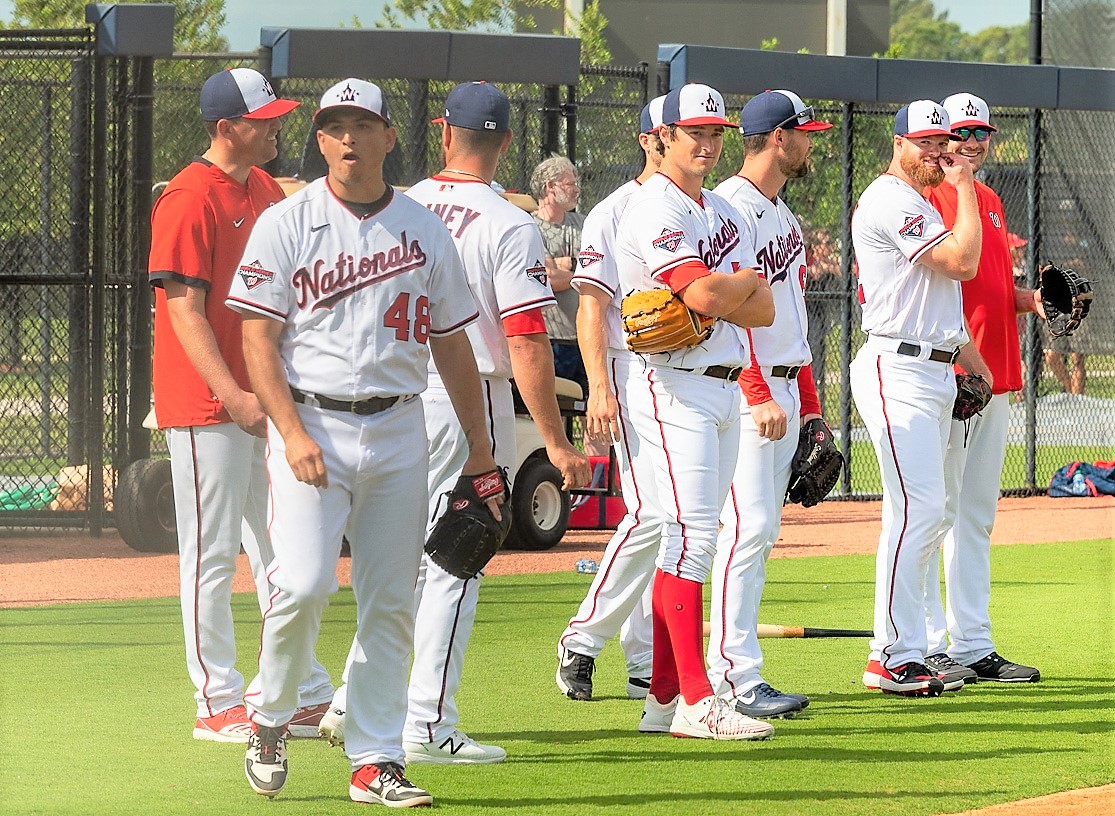 The Washington Nationals bullpen was a mixed bag of results during the 2020 season. The team parted ways last year with several left-handed pitchers from their bullpen depth. None more important to the history of the Nats than Sean Doolittle who headed to free agency. Acquired by the Nats on July 16, 2017, he appeared in 147 games over his 3 ½ seasons with the team while being a key part of the World Series championship team.

Also gone from last year’s squad are lefty relievers Fernando Abad and Roenis Elias, as well as LHP Sam Freeman who tore his ulnar collateral ligament in his pitching elbow. Prospect LHP Seth Romero broke his hand in a mysterious accident, and he couldn’t finish the 2020 season although he remains on the 40-man roster. At the end of last season, the only current lefty pitchers who were healthy from the 60-man pool: Patrick Corbin, Matt Cronin and Ben Braymer. Of course one of the first moves of this offseason from general manager Mike Rizzo was to add lefty depth to the bullpen. He followed the path he took last year with Kyle Finnegan and did some early shopping and snagged Sam Clay on November 18.

Clay, a fourth round pick for the Twins out of Georgia Tech in 2014, spent the last seven seasons in the Twins system but never reached the majors. When he became available as a minor league free agent, Rizzo signed him to a big league deal just like Riz did with Finnegan last winter. That move immediately gave Clay a coveted spot on the 40-man roster which was unexpected when he entered free agency.

“I didn’t expect a Major League contract,” Clay said via ZOOM. “I expected a regular Minor League contract. Honestly, it was not something I expected. My agent had hinted at it and suggested that maybe it could happen, but I was shell-shocked. I didn’t know what to say. I was speechless, honestly. It was just an incredible feeling.”

Time will tell whether Clay can replicate what Finnegan did in 2020. But the lefty has a golden opportunity in front of him as one of the few southpaws in the system, and he has the advantage of being on the 40-man roster which the newly acquired veteran Luis Avilan does not after he signed a minor league deal, and the same for the top prospect Cronin who was drafted less than two years ago and is not on the 40-man. Obviously the top free agent lefty, Brad Hand, is the only lefty ‘lock’ at this time for Opening Day after he was acquired via free agency last month.

“I’m fine with two in a row, three in a row,” Hand said on his consecutive game workloads on a ZOOM Thursday night. “You don’t really see anyone go four in a row.”

Hand was a former starting pitcher with the Marlins and converted to a reliever in San Diego. He said that a former Nats’ starter who was converted to a reliever, Craig Stammen, helped guide him to learn the bullpen role. Just like Hand’s transition from starter to the bullpen, Clay began his professional career the way most relievers do — as a starter, followed by a  conversion to the bullpen. The rare exception is Cronin who was drafted as a proven reliever. Clay switched full-time to the bullpen in 2017. While his reliever ERA in the minors is not stellar at 3.48, he did compile 20 saves and 200 strikeouts in 188 2/3 innings pitched in the Twins system.

What Clay specializes in begins with getting strikeouts if he has a batter in a 2-strike hole, groundball outs when bases are empty, and keeping the ball in the field of play. He relies on a good defense behind him to keep those bases empty. In 2019, Clay did not surrender a home run. Also, he led all minor league pitchers with a 71.3 percent groundball rate. In his entire minor league career spanning 405 1/3  innings, he has given up only six homers.

Of course you could guess that Clay is a sinkerballer but he also throws a slider and a changeup. As you know in today’s game with the changed rules started in 2020, the life of a pure LOOGY is not what it used to be. Relievers must either finish the inning at the point they entered or pitch to at least three batters. So sure, if one reliever faced three batters and got two outs with one runner on-base and Freddie Freeman coming up to bat, a lefty could come in and pitch to just Freeman if they recorded that third out. If Freeman got on-base, then the lefty would have to pitch to another batter and another after that if the third out was not recorded.

Teams are now looking for relievers who can pitch complete innings and put up zeroes, and there will be several Nats relievers on the bubble trying to gain a spot in the bullpen like RHP Dakota Bacus, RHP Kyle McGowin and RHP Ryne Harper to name three righties on the 40-man roster. It is also possible that the Nats will not carry a second lefty past Hand. The bullpen battle has more legitimate candidates than ever before. We did an analysis of the bullpen when Hand was acquired. We also analyzed that the Nats only converted 55 percent of their save chances in 2020 which was clearly below average. There is a reason why Hand was acquired at a cost of over $10 million. The Nats also know they must build more of their back of the bullpen from home grown piece which led the reason why the Nats drafted closers the past two years in earlier rounds to get Cronin and last year to snag RHP Holden Powell out of UCLA.

“I think I could compete for a spot,” Cronin told us. “But I’m also pretty low on professional experience, so I think it just comes down to how the people making the decisions feel about me.”

As a former closer and Top-10 prospect, the lefty Cronin is only a long-shot because he is not on the 40-man roster — but if he is lights-out in Spring Training, he could make it interesting. In the Nats Top-30 prospects as rated by Baseball America, there are only three lefty pitchers: Cronin, Romero, and Braymer.

There is always the question about minor league starters who also were thrust into a reliever’s role like Braymer and Romero during the 2020 season. For Romero, it was a mixed bag of three appearances that included a grand slam and no earned runs changed to four earnies after his own error was subsequently ruled an infield hit. Romero was noticeably nervous during his appearances and after his third game, the former 1st round pick broke his hand off-the-field and shrouded in some story of a freak fall on a staircase. That broken hand led to Braymer’s call-up.

The Nats said they want Romero to remain as a starting pitcher. For Braymer, he was used as a starter and reliever during his debut season of 2020. His 5.0 inning shutout in his final appearance of 2020 dropped his ERA to 1.23 on the season, and gave much optimism for the team’s 17th ranked prospect. Currently there are no signs as to the direction on the plans for him going into 2021 although he told us that his plan was to stay stretched out as a starter during his offseason bullpens. His results were good based on a small sample size, and Braymer’s versatility could allow Rizzo, pitching coach Jim Hickey, and manager Dave Martinez to use him as a hybrid reliever who can go short or long or LOOGY if needed. Braymer called it the “Swiss Army Knife” role and that is spot on.

“I don’t necessarily have a preference on either [starting or relieving],” Braymer told me. “I kind of like having the ability to fill in as needed. I think that’s how the team looks at me to an extent. … The team does have the luxury to keep developing me a little more as a starter. … Should something come up in a different role that needs to be filled — then I think I’d have the opportunity to fill it.”

The battle for the last spot or two in the bullpen is one of the big stories of this Spring Training. Manager Dave Martinez in one discussion already mentioned that Sam Clay would be competing for a spot. With good health, the Nats 3-H Club of Brad Hand, Daniel Hudson, and Will Harris are the veteran locks for the bottom of the bullpen plus the younger Tanner Rainey. In the middle of the bullpen, you would expect Wander Suero and Finnegan to be the middle of the bullpen guys. Count them, that is six locks in total. Suero continues to be more effective against lefties than righties with a career OPS of .646 against left-handed batters versus .710 against the righties. Suero’s continued success against lefties has allowed the team to concentrate on the best relievers no matter which hand they throw from.

The right-handed Austin Voth has no options remaining and would be the front runner for mop-up and long-relief, but at this point in his career, he might be down to his last opportunity in a make-or-break chance. Given that and simply put, Voth either makes the team or is a DFA. Going into Spring Training, seven relievers initially for what should be an eight-man bullpen. But if Voth does not make it, we could see what pitching coach Hickey had in Tampa where he carried two hybrid relievers, one righty and one lefty, who could go short relief or long relief. RHP Javy Guerra had been in that role during his tenure for the Nats, and he is back on a minor league deal. In 2019, the versatile Guerra threw in multiple innings 18 times, and 1.0 inning or less 33 times. In six outings, he was asked to pitch three innings or more. That type of pitcher is invaluable in today’s bullpen.

Nothing is for certain when you piece together the last spots on a roster.