Jeremy De La Rosa is the #Nats top outfield prospect! He tells us about improving his game and having Juan Soto as a mentor! 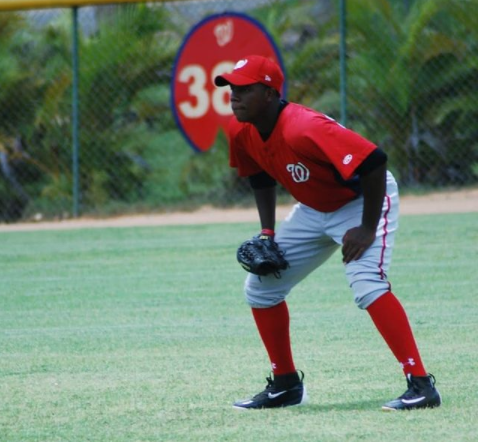 The intersection of youth and talent do not always translate into success. Mentorship and sage advice from someone who has been there before is invaluable. There is no substitution for hard work. Often this winter you can see Jeremy De La Rosa with Juan Soto on social media, and De La Rosa told us that they have trained together in the offseasons in the Dominican Republic. That is a good mentor to have even though they are only separated by 3 ¼ years of age.

“I am very excited! It is great to be named the top outfielding prospect for the Nationals,” De La Rosa told us. “I love this organization and this is the place that I worked hard to get to. You have to have faith, trust in yourself, and put God first above all because he is the one who has given me the privilege to be here.”

The left-handed hitting prospect is from Santo Domingo in the Dominican Republic. He signed with the Nationals as an international free agent at the age of 16 back in 2018 with a $300,000 signing bonus. During 2019, De La Rosa was promoted to the Rookie-level Gulf Coast (GCL) Nationals as a 17 year old and held his own which impressed the scouts and evaluators. He only batted .232 but he took his walks and had a .343 OBP. De La Rosa flashed his tools with speed and some power and patience at the plate. He played every outfield position in during that GCL stint.

De La Rosa has also worked with Jorge Mejia during offseasons. He is the hitting coach for the Nats Single-A and one of the coaches who Soto has credited with getting his swing right.

“He’s one of the most dynamic prospects in the system,” Lacy Lusk from Baseball America told us for this article. “As an 18-year-old last summer, he wasn’t intimidated at all by more experienced competition at the alternate training site. In fact, he hit a couple of the longest home runs to center field in the new Fredericksburg ballpark out of everyone there. Scouts say he can hit — and hit for power, and he has above-average range and speed.”

When the minor league season was cancelled in 2020 due to COVID, the Nats brought the then 18 year old from the Domincian to Fredericksburg to be part of the Alternate Training Site.  De La Rosa was not on the original 60-man player pool, and it turned out to be a smart addition by the front office when he was added later. The coaches and other players were impressed given his age.

“I loved him, awesome guy! And I’m crazy excited to watch him keep developing into the star he is going to be,” RHP Cade Cavalli said to us after he was with De La Rosa at the Alt Training Site as his teammate. “Crazy athletic, strong, poised, and confident for his age! Going to be fun watching him play for a long time!”

As stories get told, they say that De La Rosa hit a few tape measure homers at the Alternate Training Site in Fredericksburg that earned him much praise from his teammates who were shocked by his power. That story was confirmed by Lacy Lusk of Baseball America.

This winter, the 19-year-old has received a lot of guidance from Juan Soto which you will read about below.

“I have worked on my mindset, some of the weak points in my game, and most importantly, consistency at the plate this winter,” he told us.

Here is how Baseball America scouted De La Rosa on the 80/20 scale:

TRACK RECORD: The Nationals signed de la Rosa for $300,000 in 2018 and challenged him by skipping him over the Dominican Summer League. He showed enough promise to get tested again in 2020 when he made Washington’s 60-man player pool and competed well against upper-level minor leaguers at the alternate training site. He hit a couple of the longest home runs to center field of anyone in camp at the new ballpark in Fredericksburg, Va.

SCOUTING REPORT: De la Rosa has already learned how to get into a good hitting position. He gets on plane early and looks to drive the ball on a line. Like several young hitters in the system, he has taken to imitating National League batting champion Juan Soto’s two-strike approach. De la Rosa has juice in his bat and can hit high-velocity fastballs to all fields. He has made progress at laying off breaking balls out of the strike zone. He’s a plus athlete who looks like an NFL wide receiver when he runs down fly balls. He’s capable of playing all three outfield positions.

THE FUTURE: Though de la Rosa has yet to play in a full-season league, he showed in 2020 that he’s not afraid of facing older competition. With his bat speed and his power, he has a chance to be an impact hitter. 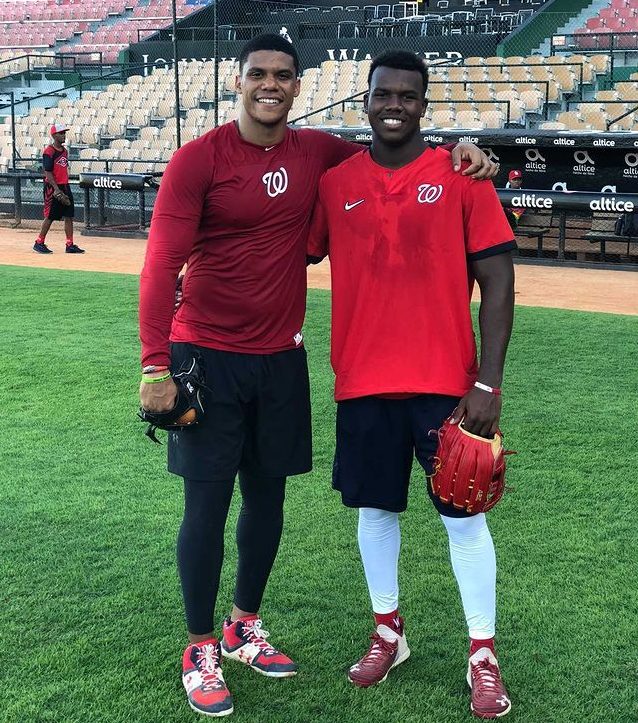 To be part of Juan Soto’s inner circle is invaluable. We have seen Soto and De La Rosa working out together and jumping off of rock formations and into the water for rest and relaxation. Behind the scenes, this pair talk about how to approach the game.

Soto has been a mentor to the slightly younger De La Rosa, and before this we knew Juan Soto was emerging as a team leader.

“Learning from Juan Soto has been great,” the prospect told us. “I have learned from him to trust yourself in the work that you do and let your talents speak for themselves. I train with him as much as I can here in the Dominican Republic, and it is an invaluable experience. Trust in God and yourself is the most important thing I have learned from him.”

That is sage advice from Soto who is just 22 years old. The mental side of the game is of utmost importance. These are lessons you cannot learn from just anywhere. Most players do not learn these lessons until they get into the Majors.

When the teenage De La Rosa is not playing baseball, he said he likes to be outdoors to clear his mind. Like many other players in the league, he enjoys playing Playstation, and he is also a foodie who enjoys going out to different places to eat.

Being young has its advantages as De La Rosa also loves to go outside and eat ice cream and said he is looking for any good ice cream recommendations for when the season starts! We have been told you have to try the Ice Cream Club near West Palm Beach. Near Nationals Park is definitely Ice Cream Jubilee in the Navy Yard. For players assigned to Single-A Fredericksburg, there is Carl’s Ice Cream.