Possibly the greatest hitter ever, Juan Soto is the real deal! 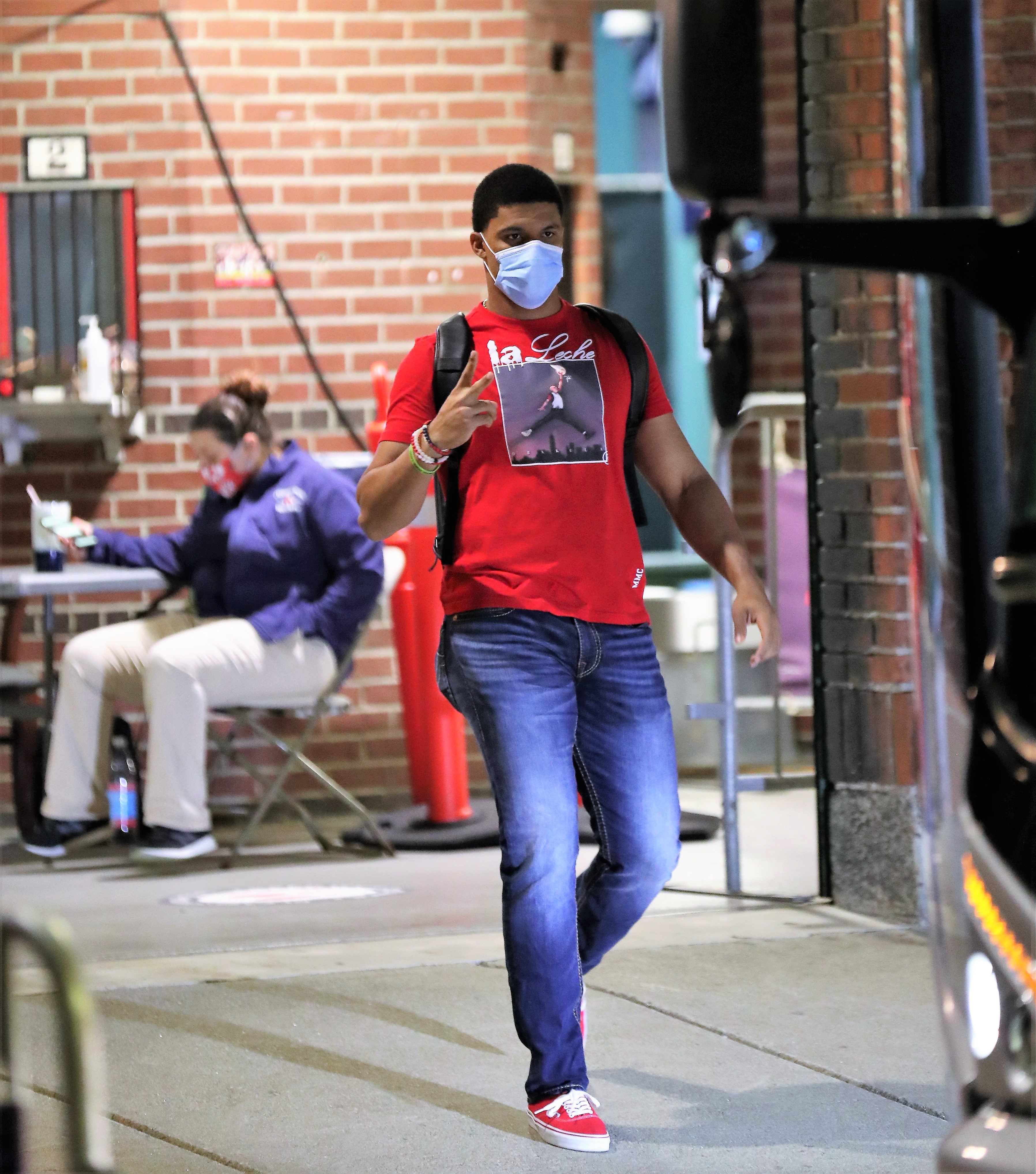 Nats Single-A hitting coach Jorge Mejia was Juan Soto’s mentor coming up through the Nationals system, and Mejia checks in often on him and in-person during the offseason. It is a process and Soto also had hitting coach Kevin Long working on a plan to make improvements. In 2019, Soto transformed to another level working with Long on the offspeed pitches. It was part of the adjustments to get Soto to the next level, and he improved his chase rate on pitches out of the zone to one of the best marks in the Majors in 2020. It was reminiscent of Barry Bonds where he was willing to take his walks and move the line — but if a pitcher tried to come over the plate in the zone — Soto was going to punish the baseball. And he did repeatedly to win the batting crown with a .351 batting average and the youngest to ever do it in the National League.

Along the way, Soto is adding reminders of his greatness with some trophies for his personal achievements. Last night, the 22-year-old was named to the 2020 All-MLB First Team which is the best in the Majors at each position. It is more than an All-Star team. The outfield on the 2020 All-MLB First Team are Soto, Mike Trout and Mookie Betts. It is only the second year of this award, and to be named in the same breath as Trout and Betts is an honor.

It is about time that Soto starts to receive the accolades that he justly deserves. For some reason, the national media had not been attached enough to Soto. Sure, he got his mentions, but not the superstar treatment. The media and Madison Avenue have a funny way of picking their darlings.

Last week, writer Mike Petriello of MLB.com wrote a piece titled, “This Young Star is the next Ted Williams”, and that youngster who Petriello was referring to is none other than Juan Soto. Finally, we could celebrate a national writer who got it. It. The “It” factor. Soto has it. He is not Ken Griffey Jr. out in the outfield with the hops over tall fences or leaping tall buildings in a single bound — but Soto is a great hitter. Where he finishes in the pantheon of the greatest hitters will be judged when his entire book is written. Through age-21 seasons — Soto is up there with the Mount Rushmore of the greatest hitters.

Soto. Trout. Eight Hall of Famers as Petriello wrote. Are you kidding me?

Graphic courtesy of our friend @deeznats with help from Fangraphs, & @Topps

Maybe the most glaring difference between Soto, Trout, and Williams is that Soto already has his World Series ring. The other two could only dream about that. Most players have to buy a ticket to a World Series to attend. Soto lived it on the field and was a key part of it.

“No matter where the Nats go from here, the team’s first priority ought to be locking up Soto’s services with a very, very lucrative contract for a very, very long time,” writes Dan Szymborski for FanGraphs. “Whether rebuilding, retooling, or pushing in the whole stack of chips, Soto is a foundational talent any team can build around. I’m a fan of Bryce Harper, but he was no Soto.”

If Lloyd Bentsen was still alive, he would probably agree with Szymborski. That brings you right back around to Harper and Soto. Harper was always marketed as the greatest generational talent because of what he did in travel baseball games and amateur Home Run Derbies. He graced the cover of Sports Illustrated at 16 as “Baseball’s LeBron” and is still being hyped by the media. Sure, Harper is a very talented player, but it starts and ends with Bryce. With Soto, it really is about his team first. Soto has not had one SI cover or even an All-Star game invite — and yet he is not the type to complain. “It is what it is,” he told a friend.

Smart people like Petriello, Szymborski, and Mears have known the projectable talent of Soto for a long time. I saw it back in the Dominican Republic when Soto was 16. I once said that he was a Major League hitter already. His hip rotation and hands moved in perfect harmony. I did not know if he would be a prolific power hitter until his body filled out and I was wrong about that after hitting a ball that went into the third concourse of CitiField on August 12 of this year. What I was right about was that he would be a dangerous hitter. He was so unselfish as a young hitter and willing to take his walks. There is no exaggerated launch angle.

That is a good hitting lesson of philosophies for a kid of any age and for the 22 year old to practice what he preaches.

This entry was posted in Soto. Bookmark the permalink.
← Previous Article | Next Article →