Currently projected, the Nats infield is near the bottom according to FanGraphs! 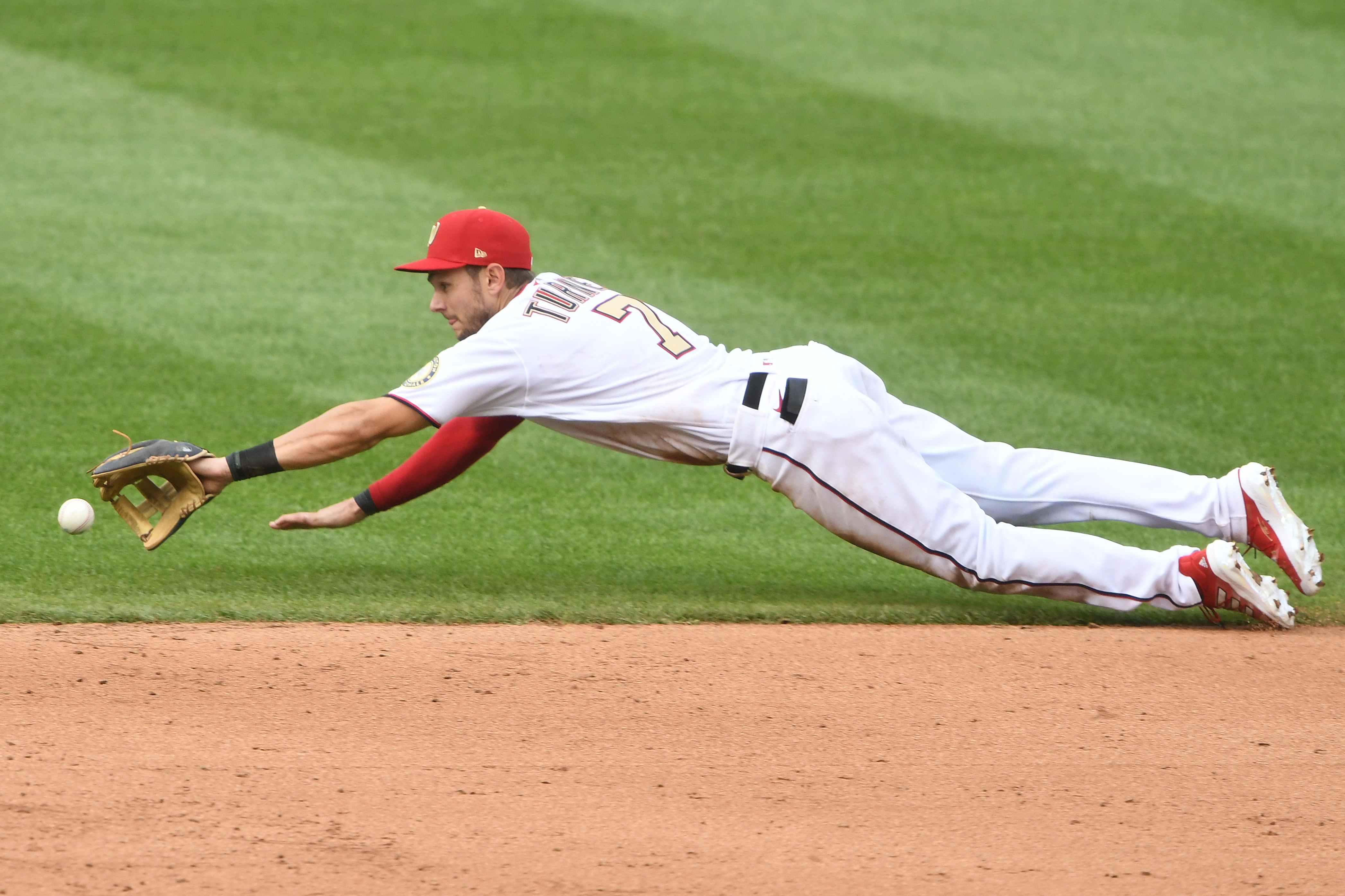 To quote Daniel Murphy when he was with the Washington Nationals, “Do you go to FanGraphs at all?” If you did a deep dive into FanGraphs projections, you might know that your Washington Nationals have one of the lowest rated infields in terms of WAR. It gets even worse when you remove Trea Turner‘s +3.8 projected WAR from the mix as the Nats drop to the bottom in all of baseball. Yes, if the Nats do not acquire another player for their infield, they would be the worst in baseball if you removed the Nats star shortstop. The combined number for everyone else is +0.7.

Reading those numbers are sobering. Diving into the details tells us that FanGraphs has Carter Kieboom once again as a starter at third base. They are not as bullish as they were nine months ago on Kieboom — but they are still optimistic and are projecting a +1.2 WAR for the young infielder. Maybe Kieboom’s star will shine, and he will reach the top prospect stardom he had prior to the 2020 season. But if he turns in numbers like we have seen before, the Nats would nosedive further. 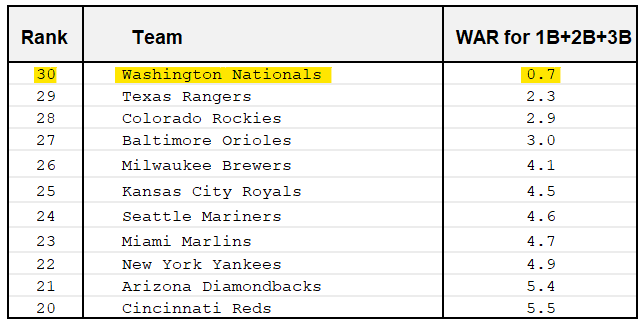 The Nats are dead last today on FanGraphs according to the research in this chart we compiled. Those figures are up-to-date and include all of the recent moves like Carlos Santana‘s addition to the Royals roster and Nate Lowe‘s trade to the Rangers. Even the lowly Orioles are ahead of the Nats and that is after they non-tendered their top-WAR player in 2020, Hanser Alberto.

Maybe you don’t believe in WAR, or even FanGraphs ability to project the Nats infield. They believe that if the Nats make no moves (doubtful) that Kieboom starts at 3rd base, Jake Noll at 1st base, Luis Garcia gets the bulk of the starts at 2nd base, and Starlin Castro splits time at 2nd base and 3rd base with Josh Harrison in a utility role.

This takes me right back to the point/counterpoint that Don H. and I had earlier in the week on “protection” behind Juan Soto. After all of that research, one name stood out to me, and that was DJ LeMahieu. He can play all of the infield positions except for shortstop. He is the top RISP man available over the last two seasons combined. Normally we would be yearning for a lefty, but because the need is a complementary bat behind Juan Soto, it is DJLM who stands out. His projected WAR is +3.3.  As I mentioned in that same article, Kyle Schwarber would be a fine platoon player for the Nats at first base. FanGraphs has him at a +2.1 WAR and 553 plate appearances. I would ratchet him back to 120 starts and then use him in 30 more plate appearances as a pinch-hitter. That would put him closer to 500 plate appearances and would probably drop his WAR to +1.9.

Take all of that on Turner, LeMahieu (+3.3), Schwarber (+1.9) and stick with Castro (+0.4) and find complementary pieces with a right-handed first baseman (+0.3) from a pick of a trio of Ryan Zimmerman, Asdrubal Cabrera and Howie Kendrick. You would also have Josh Harrison (-0.2) on the bench. Add that up and you have +5.7 or a 5.0 WAR upgrade over today’s FanGraphs’ projection. That is significant.

Add Kevin Pillar (+1.0 WAR) as the 4th outfielder and Wilson Ramos (+1.2 WAR) at backup catcher and cumulatively that probably added another +1.5 WAR. Combined we just added +6.5 WAR rather easily and affordably speaking. LeMahieu will cost $14-$17 million on a 4-year deal and Schwarber might cost $7.5 million, and a few million each for Ramos and Pillar and the final AAV payroll is in the upper $180’s (millions) in payroll.

“It’s been a good, active, kind of a busy, information-gathering time like it always is at this part of the offseason,” general manager Mike Rizzo said last week on 106.7 radio.

In win projections, the Nats would be 83-85 wins with that roster. That is not nearly enough to win the NL East, but with some good fortune and some July 31 tweaks — who knows. In an expanded playoffs, that could get a Wild Card.

Here is a lineup:

This lineup features three MVP candidates from 2020. The bench is Ramos, Pillar, Harrison, a RH first baseman, and Yadiel Hernandez to add another lefty to the bench. Again while you are shaking your head side-to-side in disgust — we already prefaced that this is not a 90-win team on paper. There just is no way to get there unless the team can spend up to $200 million on payroll. This team will only go as far as the Big-3 starters carry the 2021 Nats.

“We haven’t won four division titles, a world championship, and a whole bunch of games by not having a clear concise strategy to put together another championship-caliber club, and that’s our goal for next year, to do the same,” Rizzo said.

With so many moves to make and six open spots on the 40-man roster, expect Rizzo to make his moves. With 19-days remaining in December, we expect a couple this month, and the rest in January 2021.

The Times They Are a-Changin’. The Winter Meetings finished with the Carlos Santana deal as the biggest deal and all of  $17.5 million over two years (backloaded). Touching base with clubs, players and agents is being done over Skype, ZOOM, phone and text. Everything is electronic and digital.