Point-CounterPoint: Lineup Protection? How Valuable Is It? Part 1 of ??? 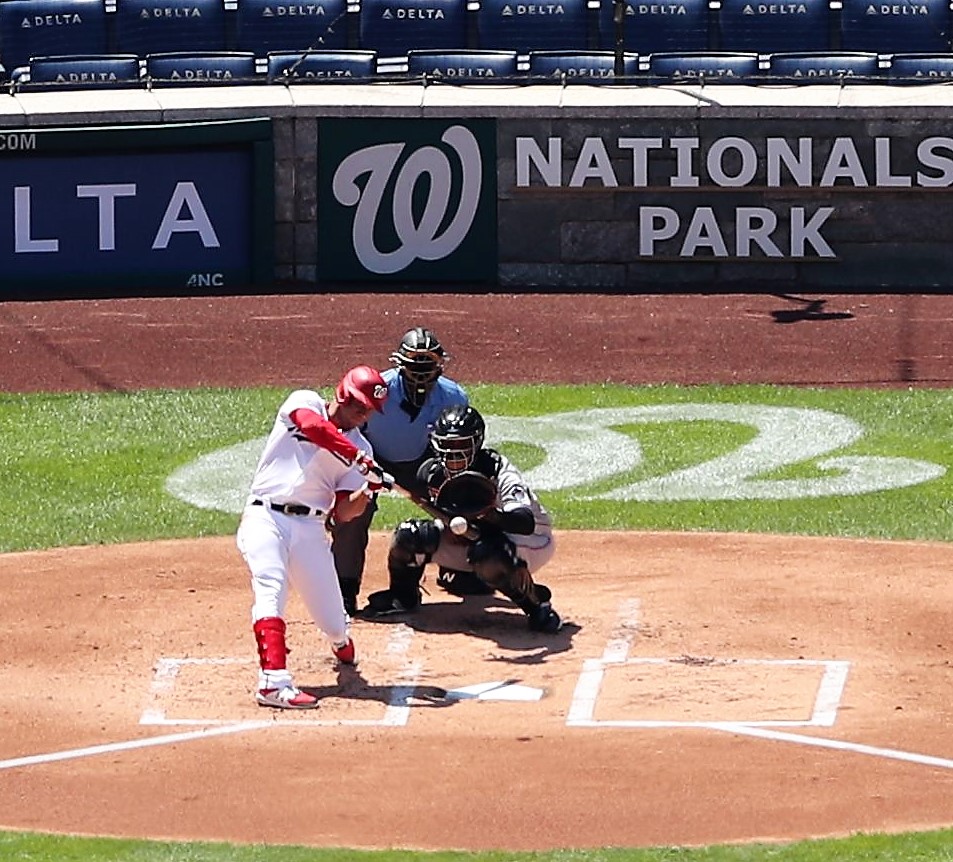 Don: As you know I used to be able to download the MLB Game Day data. Something changed at the beginning of 2019 and it stopped working. Well, thanks to having time due to retiring, I think I just figured out my issue/problem with accessing the recent years of MLB GameDay data. I just successfully loaded all the data for the 2020 season. I have done a brief quality check (recognizing that there will always be some discrepancies).

I am thinking I would try to do some analysis on the idea of “protection”. I am not convinced that protection is a given for all types of batters – and most specifically Soto. I’ve always felt that protection matters more for free swingers – guys who will bite on pitches out of the zone. That is most definitely not Juan Soto.

And I freely admit most of my motivation to look at this comes from all the talk about needed a BIG BAT after Soto to protect him. I think we just need someone who keeps the line moving (i.e., does not make outs).

Steve: That would be HUGE. When you look at it, we need to look at the issue of Soto stranded on the bases in comparison to Freddie Freeman once you back out home runs. That would be interesting.

Don: Interesting idea. I was actually considering some other approaches, but lets look at this first since that data is already easily available on Baseball Reference.

Since we are talking about the idea of protection, the statistician/data analyst in me says we need to look at runs scored independent of whether he is already on base. The ability to get on base is part of Protection.

Steve: Good point. One of the reasons that protection is important is getting good pitches to hit; getting on-base in general.

Don: So let us look at the Freeman and Soto’s numbers behind their slash lines using BBREF.

Steve: So only 1% more. That to me says that the problem isn’t as large as people make it out to be (including me initially), but Soto had a .490 OBP compared to Freeman’s .462 so if you adjust for that point that Soto was on-base 6% more (approximately)  yet scored 1% less it has to be weighted slightly over 1%. Again not terrible. Honestly, I was thinking a 5% difference not 1%. That kind of disproves that it was ultimately costing the team. Yes, Soto got pitched around more but he also scored runs at a high rate if you use a 162 game extrapolation he would have scored a staggering 134 runs in a full-season!

Don: Yes. That is another way of looking at it. And while I would be the last to say correlation means causation, it is worth noting that the Nats were 19-28 in the 47 games he played, and

And while there is no way to assume a cause-effect relationship, Soto getting on base is a good thing for the Nats. So maybe IBBs are not a bad thing.

Steve: OMG, that is mind-blowing. It wasn’t even a 2% difference. Just mind-blowing. Maybe getting walked isn’t a bad thing if the RBIs and Run Scored are still over that 100/100 pace. Here is  who knocked him in the most:

What I unfortunately do not have is the exact RISP batting average for each player who batted behind Soto in the lineup when he was in scoring position, but below is the team’s 2020 RISP chart with their overall numbers. Think how little Josh Harrison played and he knocked in Soto a total of three times. Very interesting for sure as he was a .320 batter in RISP situations in 2020. Don’t get me wrong, he is an RBI hitters dream to hit after him because he is on-base almost 50% of the time, and he actually has good speed. 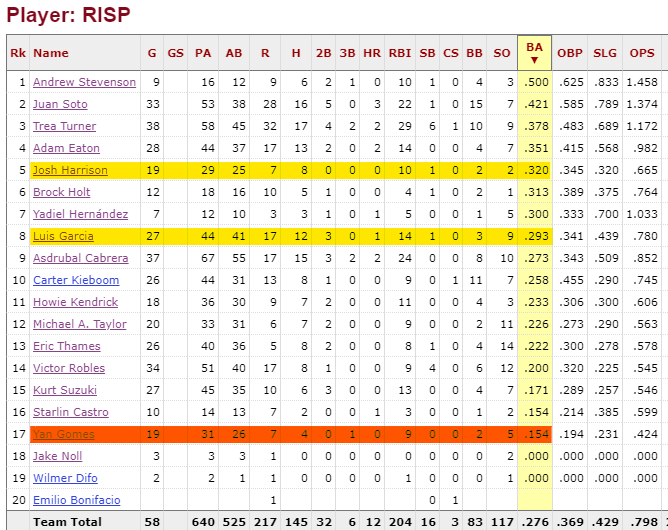 Don:  The details of who drove Soto in pretty much jive with the data I downloaded.

But first, here is the distribution of who batted behind Freeman and Soto.

As expected, Ozuna batted behind Freeman almost exclusively. You have to combine Asdrubal, Howie and Kurt to match Ozuna’s percentage. And then combine Yadiel and Thames to match d’Arnaud.

I’m curious to look at the individual PAs where Soto and Freeman scored. The MLB Game Day data is relatively complete. It has details about most every facet of the game. The logic was a bit of a challenge, but I was able to generate reports that include all the PAs in every game where they scored – starting with how they got on base, and ending with how they scored.

Steve: This is just so fascinating about a disciplined hitter like Soto that the most important aspect of the team’s success with both Trea Turner and Juan Soto on-base so much is that the batters behind them are driving them in. You have to make teams pay for walking Juan and many times you had Trea and Juan on-base at the same time. “Ducks on the Pond” or “Ribeyes on the grill” they like to call it. An RBI machines dream to have those opportunities. This brings me back to finding players who excel in those spots. Clearly Josh Harrison did in 2020 in a small sample size, but maybe you can bat a great lefty behind Soto who can platoon with Harrison.

I think that is how I would analyze potential trade and free agent targets for the “big bat” behind Soto based on their ability to make the other team pay. “Clutch” can’t be measured they say, but RISP can. Some guys shrink in those spots while others step up. A few names keep shining on my charts: DJ LeMahieu and Michael Brantley. Another name on there is Josh Bell who really stepped up in RISP in 2019. He was awful in all facets in 2020, but he was one of the TN favorites to trade for if the price was right.

I think we analyze RISP over a long enough period relative to their non-RISP BA and see if any other names come up.

Don: Great idea. Clearly a lot more to see what we can discover from the data.

In the meantime, as expected (as mentioned above), Marcell Ozuna batted after Freeman most of the time (over 90%); while Soto had a lot more players batting after him (Cabrera the most at 49%). So for the times that Freeman and Soto got on base, lets look at the distribution of what Ozuna did vs. whoever batter after Soto. Yes, it is a bit of an apples to oranges comparison. But the issue at hand is whether Soto really needs a Big Bat right after him. So here are the results:

The Made an Out numbers jumps out at me – they are not that different.

Here are the details about each time either Freeman or Soto scored. All of this info comes from the Game Day data. The descriptive text comes from the AtBat data table and the Scoring Event from the Runner table. I included that because there are a few cases where the description does not include scoring detail (e.g., Freeman scored once on a balk).

Steve: You’re amazing. This level of detail is so great to analyze how every run was scored. This is a ton of detail within those at-bats. I think my favorite was that 9/22 game against the Phillies.

Don: I’ll gladly take credit for generating the logic to create the report. But MLB takes credit for providing that rich set of data.

To wrap-up, this Point-CounterPoint took a different direction than I expected. Your suggestion to look at when/how they scored ignoring HRs was pretty insightful.

I am more optimistic now than I was before we started this discussion that Rizzo can do something to improve the team. I still question the value of protection for Soto, but imagine what could happen if the guys who get on-base more often than the guys who followed him this year.

I still want to look at slash line for players who batted before Soto vs. when they did not bat before him – reversing the issue of protection – is Juan protecting others? Likewise what are Freeman and Soto’s slash lines based on who followed him. Of course, the the RISP issue, as you mentioned, is important. Need to look at men on-base and number of outs.

And perhaps the TalkNats commenters can suggest some things to look at.

Steve: This was so informative and eye opening with all the work you did Don. I’m sure the Nats “Pentagon” has done similar analysis internally for Mike Rizzo. Could the scoring number have been better for Soto? Of course, but they are much better than I would have imagined in comparison to Freeman who had Ozuna behind him consistently. Freeman won the league MVP and Ozuna was not far behind him in MVP votes himself. Both players had monster years. So did Soto obviously. Sure, we want a good bat behind Soto, but it is probably more important that it is a high batting average player who can knock in runs.

Statistically, DJ LeMahieu who can play 3rd, 2nd or 1st base is the guy I think fits in D.C. the best. Have him bat after Trea and Soto in that three-hole then Rizzo has choices for the cleanup spot for that big lefty thumper. Maybe it is Carlos Santana, but I still like Kyle Schwarber with a first baseman’s glove as the lefty which would allow the Nats to re-sign Ryan Zimmerman, Asdrubal Cabrera or Howie Kendrick.

Don: Thanks. I would be shocked if the Nats “Pentagon” hasn’t made a similar point to Rizzo. I’m looking forward to continuing the Protection discussion; as well as a host of other points. As you said, we are both learning things thru this process and hopefully the TalkNats community is as well (and enjoying these posts).

This entry was posted in Analysis, Feature, Point-CounterPoint. Bookmark the permalink.
← Previous Article | Next Article →