Tim Cate is the #Nats top lefty pitching prospect! What’s he all about and what did Mike Rizzo have to say! 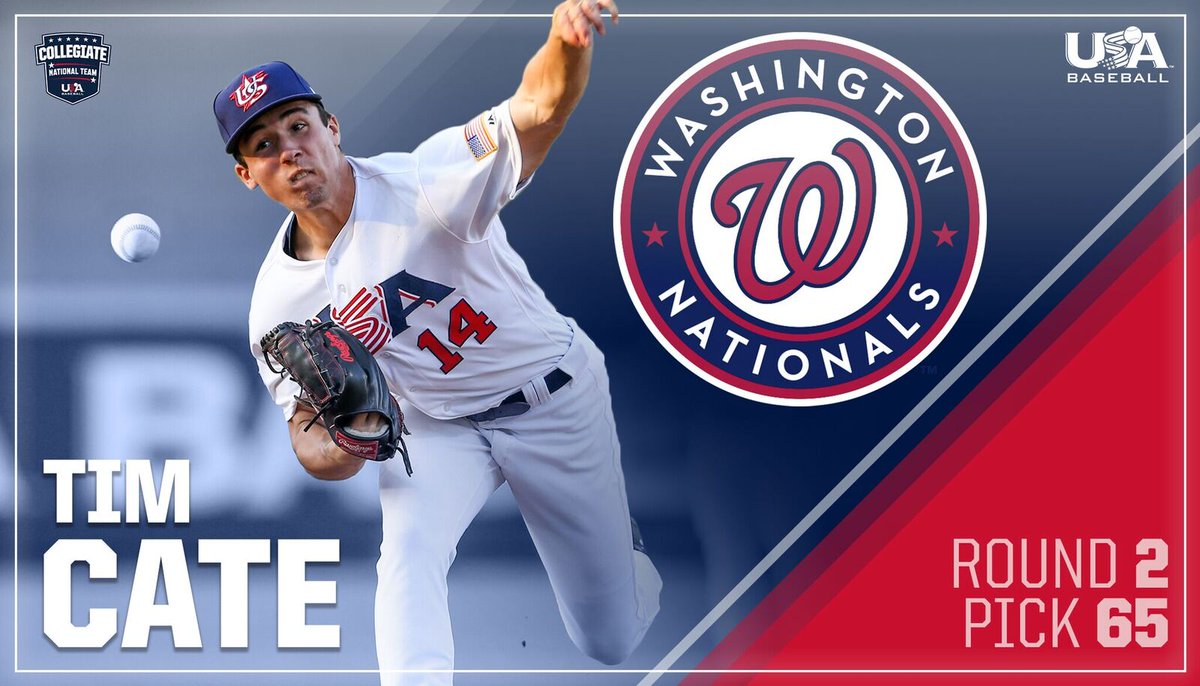 When general manager Mike Rizzo drafted Tim Cate in the 2nd round of the 2018 draft, the lefty immediately drew comparisons to Gio Gonzalez for their similar size and repertoire of fastball and curveball throwing southpaws. These days, Cate is working hard on his secondary pitches, and if he ever decided to develop a cutter, he would have the five-pitch arsenal of one of the newest Nats, Jon Lester. At Baseball America, their rankings have Cate as the Nats 7th best prospect, and he has been ranked as high as fifth on other sites. The UConn product got to be part of the 60-man pool at the Alternate Training Site for the Nats this past summer in Fredericksburg, Virginia as well as attending Fall instructs.

At the State of the Nationals event that aired on Saturday for season ticket holders, new pitching coach Jim Hickey spoke to how he wants to have ten starters he can count on for the 2021 season. To that, Rizzo spoke about the depth beyond the starting pitchers with MLB experience like Erick Fedde, Austin Voth, Seth Romero, Ben Braymer, Paolo Espino and of course Kyle McGowin has starter’s experience also. Specifically Rizzo named four minor league top pitching prospects who could see their MLB debut in 2021, and that list includes Cate.

“When you hear the names Jackson Rutledge, Cade Cavalli, Cole Henry, and Tim Cate — these are [Nationals’] starting pitching prospects who could impact the big league club as early as some time in 2021,” Rizzo said.

Fortunately Cate read that quote on TalkNats over the weekend, and had some thoughts on Rizzo’s comment.

“It’s definitely a good feeling to be recognized by Mike Rizzo and other coaches from the organization,” Cate said to us. “A lot of hard work goes into what we do so to know that those guys take notice is encouraging.”

“Yes I know all those guys Mike Rizzo mentioned [Rutledge, Cavalli, and Henry]. We all bonded over the summer, instructional league and this offseason. They are great guys and good friends of mine now. I’m glad I have the opportunity to play alongside them.”

When Cate was at the University of Connecticut, he set the career strikeout record there, and was a sought after lefty by many teams who were hoping they could snag him in the draft. The Nats picked him at Nº. 65 overall in the 2nd round in 2018.

“All the things that the Nationals top brass are seeing in Tim, we saw in Tim,” his pitching coach at UConn, Josh MacDonald said. “He’s as talented and as confident of a competitor that I’ve seen. I would not want to be the person who sets the bar for Tim because he tends to outdo expectations.”

Here is the scouting from Baseball America on Cate:

TRACK RECORD: The lefthanded Cate had Tommy John surgery in high school but was so eager to continue playing that he pitched with his right arm. He went on to set UConn’s career strikeout record and was drafted in the second round, No. 65 overall, by the Nationals in 2018. Cate went out and won the organization’s minor league pitcher of the year award in 2019, then spent 2020 at the alternate training site in Fredericksburg, Va.

SCOUTING REPORT: Cate is undersized but has shown moxie at each level he’s pitched. He maintains a consistent effort level and has a smooth delivery. By moving the ball to all quadrants of the strike zone, he’s able to stay away from hitters’ barrels. That’s important because his fastball is a fringy offering that lives in the 89-90 mph range. It plays up some with his ability to cut and sink it. Cate’s curveball is his signature pitch as a hammer in the low 80s that he has an exceptional feel to command. His changeup made great strides at the alternate site and began flashing above-average. Cate is an excellent strike-thrower who can locate his pitches to both sides of the plate.

“I love him, love him,” former Nats’ pitching coach Paul Menhart said of Cate a year ago. “He’s got a bright future ahead of him. He’s got a unique gift to spin that baseball — that curveball is special. He’s on the right track, the escalator is moving up for him.”

As far as Cate’s repertoire goes, we mentioned his similarities to Gio Gonzalez on the pitches both throw. Cate’s arsenal is certainly a work-in-progress and could expand to four ‘plus’ pitches because his fastball relies more on movement and dotting his spots rather than relying on high velo.

“I’m still throwing the 4-seam and curve, and the past two years I’ve worked hard on my changeup and 2-seam,” Cate said. “I’m hoping with all that work, I can consistently throw those two pitches this year and add to my repertoire. The 2-seam is a fun pitch to throw off my 4-seam because they have a scissor effect and the changeup is a necessary pitch for any starter, and I think it will give me some freedom and keep guys off balance.”

With all the work Cate is doing this offseason in Palm Beach County, Florida, he will be ready to move up in the minors this year with the chance that Rizzo spoke of that possibly will include his opportunity that could land him in the Majors. The southpaw is also working with advanced analytics and technology.

“With Rapsodo and Trackman becoming such an important tool for us pitchers to use I’ve been trying to learn as much as I can about it. The numbers can tell us so much about what the ball is doing. The challenge is knowing how to apply that knowledge to getting outs in games.”

One of the coincidences in life and sports that you never know where the roads you travel will bring you. Cate grew up in Connecticut as a Red Sox fan in his formative years, and his family still lives in Connecticut. For years he got to watch Jon Lester pitch.

“When the Nats signed Jon Lester — that was the guy my dad always told [Tim] to watch being a Red Sox fan,” Tim’s brother Jeff Cate told us. “Yeah the odds of then being teammates seemed extremely small, and it happened.”

So Tim Cate grew up watching Lester pitch the Red Sox to two World Series parades during his tenure from 2006 to 2014. Cate was just 8 years old when Lester made his Red Sox debut in 2006.

“Yeah if I get the opportunity to speak with any of the big league guys I won’t pass up that chance. I loved watching Lester when I was younger being a Red Sox fan and all, but we also have Max Scherzer, Patrick Corbin, Stephen Strasburg and many other guys to learn from too.”

Tim is represented by CAA, and they represent Ryan Zimmerman and Trea Turner also. He will hopefully get an invite to Spring Training in big league camp to get on the field with all of these players and soak it all in. He will have his golf clubs with him as that is one of the things he does away from the baseball fields as well as he likes playing video games. This is a big year for Tim Cate.