Mike Rizzo, Dave Martinez and Jim Hickey give the State of the Nats! 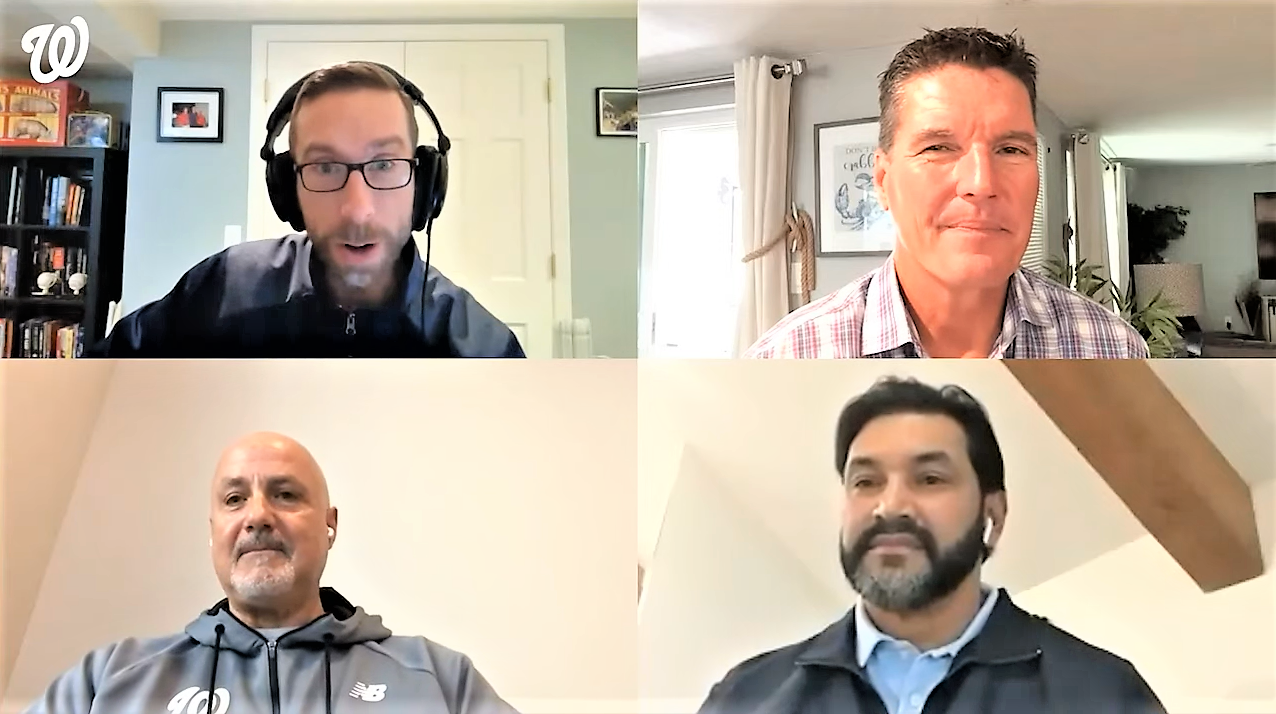 Screenshot of the event

The Washington Nationals aired their annual offseason “State of the Nats” report this year in a virtual presentation featuring Mike Rizzo, General Manager and President of Baseball Operations, Manager Dave Martinez, and Pitching Coach Jim Hickey. The opening had an introduction from Executive Vice President of Business Operations, Jake Burns. The show was moderated by Nats radio voice Dave Jageler. There was also a special guest appearance from Ryan Zimmerman as the program shifted from Burns to baseball talk. But mostly, this event which is an exclusive perk for full-season ticket holders and their guests, did not have the same feel as prior years when fans packed into a warm inside space at Nats Park before the Super Bowl to attend this coveted event.

Most years, Rizzo gives the VIP crowd some tidbits that you could only hear at this event which made it a “must attend” for those who want to get it right from the general manager’s mouth. This year there were a few takeaways. Nothing that became “breaking news” type of info.

The most anticipated discussion at this event every year is whether Rizzo is done with the roster, and what direction it is going in. In past years, we have found tidbits on who they perceived as a starter and players on the bubble. Back in 2018, Rizzo named A.J. Cole as his 5th starter, and last year Martinez said that Carter Kieboom would get the opportunity to be his starting third baseman. This year the clues were few, and it seemed like this year’s event was recorded earlier in the week based on a question about whether Mike Rizzo would add another catcher. We knew before Saturday that Alex Avila was already signed as the backup catcher. The banter back and forth still had a lot of good information.

After the season Rizzo said as the norm he would gather up his manager, some coaches, and the front office and see what their needs and wants are for their upcoming season. But he also stressed that they assess the previous season results and what went right and what went wrong.

“We gave ourselves an autopsy of how things went. What went right and what went wrong in 2020,” Rizzo said. “We put together a wish-list of players that fit positionally, fit well for us. Then we kind of get more specific into specific names and players and that type of thing. Then you painstakingly go through each and every report and evaluate the players you may — or may not want to acquire.”

“Lots of specifications go into this thing. There’s the performance on the field, roster dynamics [such as] right-handed balance, left-handed balance, and there’s a makeup and character component that we factor in very greatly. And then there’s availability — are players available? Are other teams ready to make moves? So we kind of dive into the free agent market, the trade market, and see what fits better for us.”

“We put together a plan and there is no specific timetable. Sometimes we’ve done our business earlier than others and it’s kind waiting for the market to form when your best deals are made.”

How’s about Rizzo using the word “autopsy” which is what is performed on a dead body to determine the cause of death. It is actually a good analogous term to a failed season. However, in Rizzo’s entire tenure, we’ve never heard him use that word. But it works well here after a dead season like 2020 was when you finish with a losing record and fail to make the playoffs.

Rizzo’s system to evaluate players is what we talk about as Rizzo’s board of targets and rated in order from top to bottom. As deals are nixed, or players are signed by other teams, they move down the list. Rizzo has his front office staff make calls to other front offices and agents to see if deals can be made in trades and free agency.

“Kind of the inner working of a front office,” Rizzo said. “At the beginning of each offseason we kind of assess where we are at and what we are looking for like I said before. We recognized that first base would be a place that we would like to have an acquisition be it the free agent route or the trade route.”

“We kind of look for matches you know. What teams are looking to do, and is there a team that has an excess as a certain position which might lead them to move a person at that position. So I think we did an assessment of the Pirates that they may be moving some guys and Josh Bell might be available. We had our front office reach out to their front office and kind of get the ball rolling. And then when it gets a little further down the line Ben Cherington, their GM, and myself kind of take over and see if there’s a way to make a deal.”

“For every deal you do, there’s about 10 deals that you put the same amount of time and same amount of work in that don’t come to fruition. So, this was one of those deals that worked, that fit for both sides.”

Rizzo made it clear how much work goes into just getting one trade to work. He claimed that you work on 10 trade ideas just to get one to work.

It was good hearing from Jim Hickey who was just hired a few months ago. He talked about how he would sneak a few peeks at Max Scherzer‘s bullpen sessions over the years when his teams faced the Nats to try to learn from the ace. Another point from Hickey was how he wants to go easy mid-season on his starters this year due to their low innings’ count last year as pitchers will need the rest and recuperation. Hickey thinks you need 10 potential starters in the organization.

In the small world we live in, it turns out that Rizzo and Hickey knew each other growing up in Chicago. One of the interesting side notes was when Rizzo said that they played against each other back in High School. In fact, it was the 1978 Illinois High School state baseball playoffs played in Peoria, Illinois had Hickey’s Kennedy High School against Rizzo’s Holy Cross High School. Hickey’s team won (5-3) and he was the catcher in that game so not only did he pitch for Kennedy High School, but he was also a catcher.

The Nats’ manager did give us what he sees as the role in 2021 for Andrew Stevenson on the roster.

“We’re looking for Stevenson to possibly be our fourth outfielder,” Martinez said. “He did really well for us last year. He had some big at-bats and games for us. I think he’s ready. We’ll get him into Spring Training. I know he has been working diligently this offseason. … He puts together good at-bats. He works pitches.”

One of the best parts of the event was the constant talk about developing the minor leagues and even how Rizzo said Kris Kline’s group approached the 2020 amateur draft for the Nats that added Cade Cavalli and Cole Henry to the mix. Rizzo was optimistic about several of his pitching prospects.

“When you hear the names Jackson Rutledge, Cavalli, Cole Henry, and Tim Cate — these are starting pitching prospects who could impact the big league club as early as some time in 2021,” Rizzo said. “And Yasel Antuna and our great position prospects, and don’t forget we have Luis Garcia who would be a college sophomore now at 20 years old and played in the big leagues.”

“When you talk about windows for championships, our window is wide open and will stay wide open because of our great coaching staff at the big league level who never stop teaching and great domestic and international scouting and our player development is second to none. They keep the wheels rolling. They keep the prospects coming to the big leagues, and the reason we’ve won as many games as anybody in the past 11 seasons.”

As Dave Jageler said in response to Rizzo, no questions were asked by the fans this year about windows closing. Yes, when you win a World Series, the fans usually are content for a few years before they start looking at windows opening and closing. In respect to the Nationals organization, they spent a lot of money this offseason to put a quality team together on the roster.

“Thanks for all of your support,” was the message sent by both Mike Rizzo and Davey Martinez to the season ticket holders and fans of the team.

This entry was posted in CoachingStaff, DaveMartinez, MikeRizzo, Roster. Bookmark the permalink.
← Previous Article | Next Article →