Topps picks Juan Soto for the cover of their 2021 Series 1 boxes and packs! 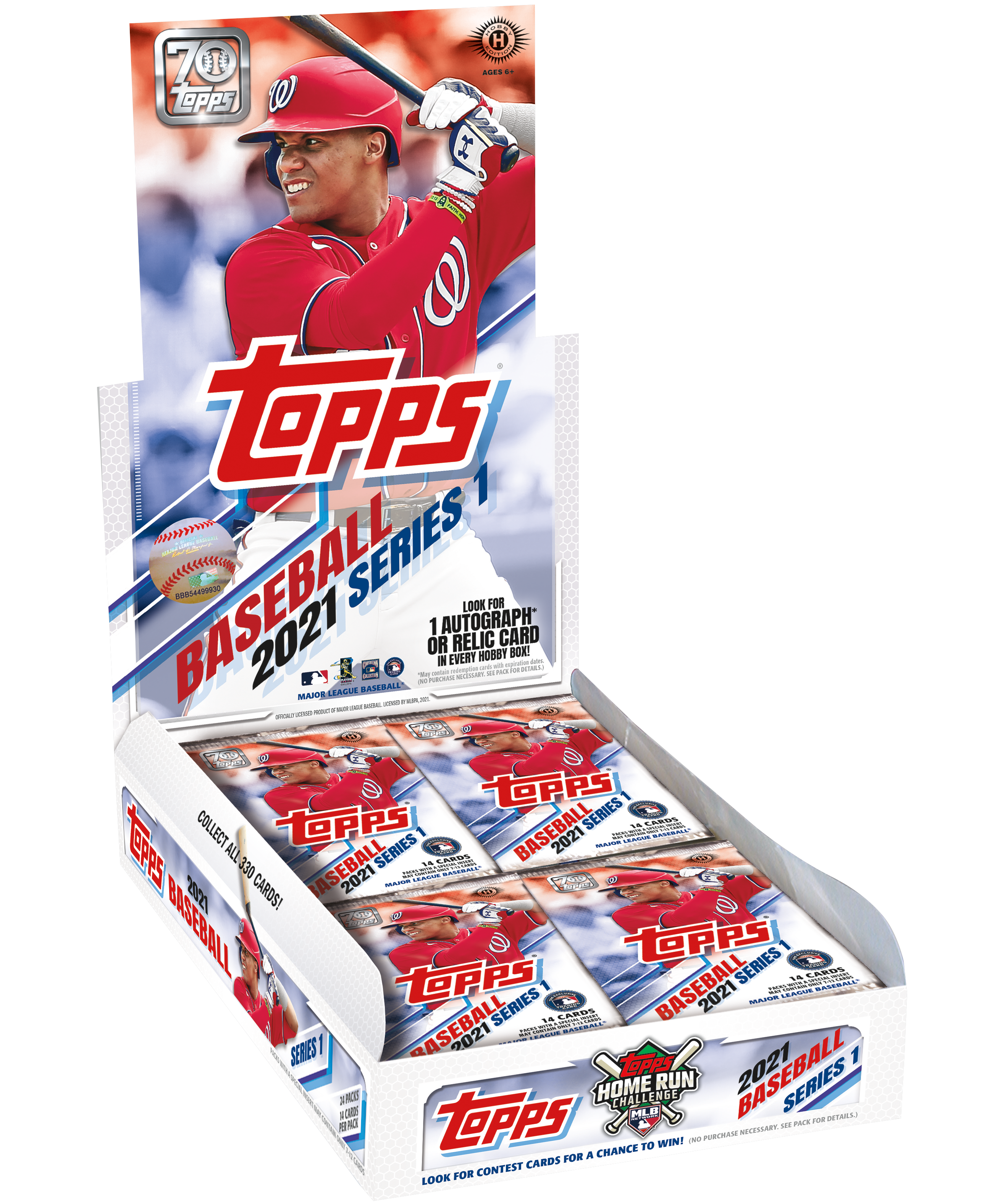 Every year there is just one player chosen for the cover of Topps Baseball Series 1, and this year the Topps Trading Card executives chose Juan Soto. Fans can also get a first look at the newest Series 1 cards the day before they’re released during the Topps Series 1 Rip Party on February 9th at 6 pm ET, which will be broadcasted live on the Topps YouTube, Facebook, Twitter and topps.com!

Cards will be available to the public on February 10th at their local card shoppes, Target, Walmart and at Topps.com. This will be an iconic set marking the 70th year for Topps when the Shorin family founded the company in 1951. You have probably seen the 1951 commemorative cards painted by artist Blake Jamieson, and Series 1 will have their own unique design plus anniversary cards throughout the history of Topps.

“We are incredibly excited for Juan Soto to be the face of this year’s 2021 Series 1 collection, especially on a year where we’re celebrating our 70th Anniversary of Topps Baseball cards,” a Topps spokesperson told us. “As a young talent, World Series Champion and exciting player to watch, Juan is a great representation of today’s game and was an easy choice for this year’s cover athlete!”

Series 1 will have a more futuristic look to the cards, and here is a sneak peak of what the Soto base card in the set will look like: 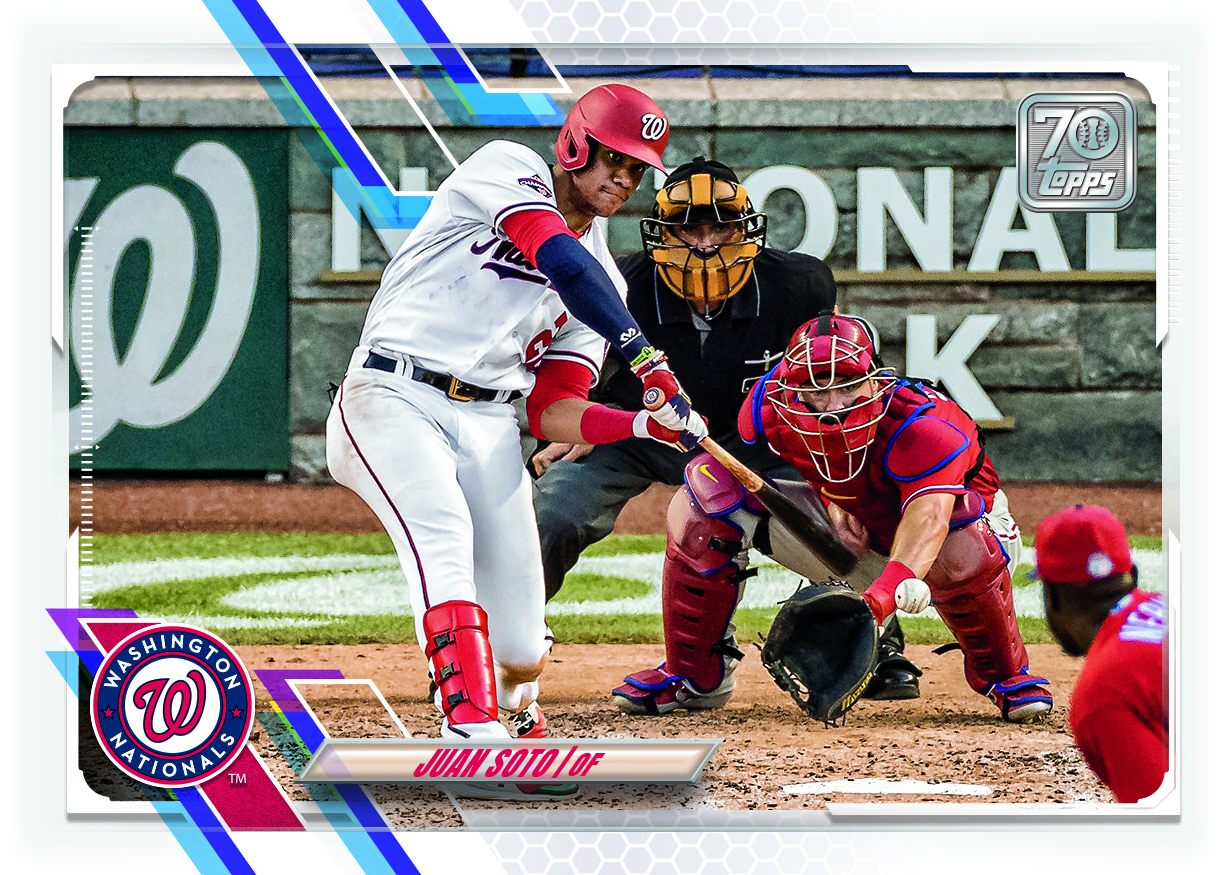 There will be a total of 330 cards in Series 1 and Series 2 has an identical number of cards and they will go on sale later in the spring.  Subsets include Future Stars, World Series Highlights and League Leaders. Team cards are also part of the checklist.

Parallel cards are available in hobby and hobby jumbo packs include:

There’s also 100 Clear cards that are numbered to 10 and produced on acetate. Those cards are only in regular hobby packs, not hobby jumbo or retail. This is the advantage of supporting your local card stores. 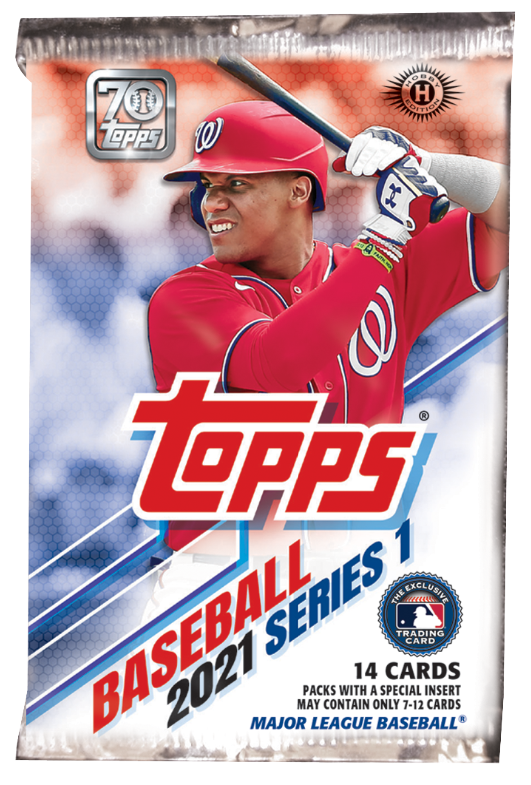 Taking a stroll down memory lane are former stars inserted into packs as a bonus. There are 70 Years of Topps Baseball highlights of the seven decades of flagship designs with different players. There is a 70-card checklist of current and retired players. Select cards also have autographs (/10 or less). Using the retro theme, tin boxes are also available in stores and they include one exclusive Chrome 70 Years of Topps insert done on Refractor stock. Topps Through the Years features 25 cards that go into different Topps brands. The History of Topps uses ten cards to chart defining moments in the company’s past.

The History of Topps Baseball Buybacks are limited to 70 cards. These are original cards from the past that have been numbered for this release.

Topps Double Headers are two-sided cards of 25 stars from the past, and on one side will have the player’s first Topps card while the back is their final one as a player.

Keeping the the 70 Years of Baseball theme are autographed cards that use the anniversary theme to showcase signatures from several generations. Parallels include Black (/199), Gold (/50), Red (/25) and Platinum (1/1). With just five copies each, Dual Autographs are going to be the ones that collectors will hope to pull in a pack.

“That’s amazing that I’m going to be the cover and everything,” Soto said. “I can’t wait to see it. … It’s just amazing to be part of that.”

There will also be the sought after game used pieces in cards also as well as relic cards, Home Run Challenge cards, and special art cards. These are also popular among collectors.

One more bonus is the 25 special tickets that are available in packs in Series 1 that will get you into an exclusive Topps event with a meet-and-greet with MLB players.