Cole Henry is one of the #Nats top prospects who you need to know! 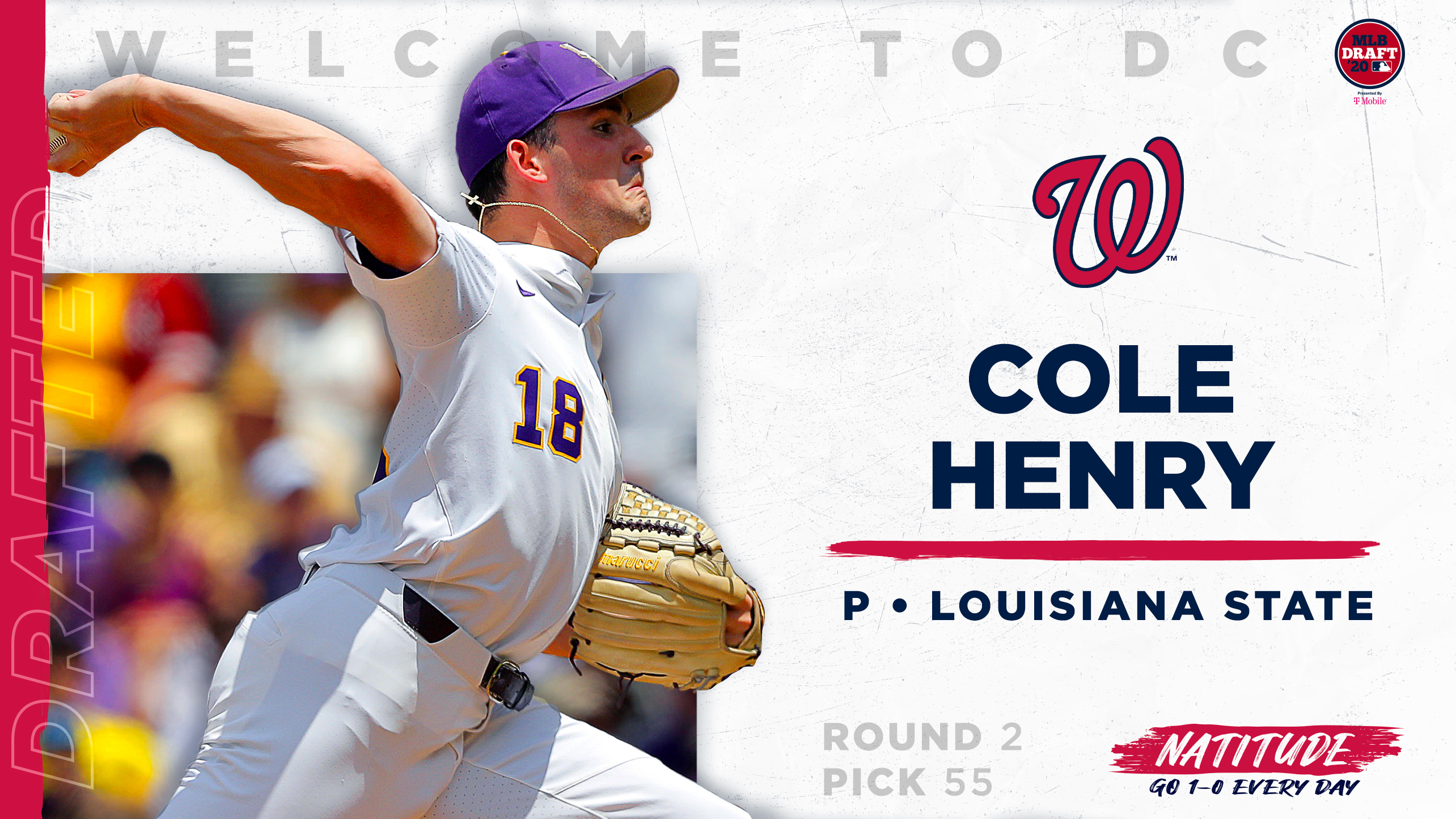 The 2020 draft for the Washington Nationals yielded Cade Cavalli, Cole Henry, Samuel Infante, Holden Powell, Brady Lindsly, and Mitchell Parker over the truncated 5-round amateur draft. Most Nats fans are familiar with Cavalli already, and those who follow the top prospects know that Cole Henry is already the Nats Nº. 3 prospect on Baseball America‘s rankings.

At the Nats fall instructs in the West  Palm Beach complex, Henry was there with most of the Nats top prospects including Cavalli and Jackson Rutledge who are rated on all of the Nats prospect lists as the top two players.

“Yeah for sure, Cade and Rut are both great pitchers and even better dudes,” Henry told us. “Got to meet both of them for the first time at instructs, and I think the sky is the limit for both of those guys! I’m honored to be ranked right up there with them and to be able to compete against and learn from them each and everyday is going to be awesome!”

Coincidentally, the second-round pick went to LSU where Nats’ outfielder Andrew Stevenson was also drafted from.

“I actually never had any interaction with the Stevenson family, but my little brother plays on the same travel ball team as his little brother so I guess we have that in common too,” he said.

It is a small world as they say and Josh Stevenson played the past 3 summers on the Louisiana Knights travel team with Henry’s younger brother. Josh has committed to play college ball at LSU like his older brother, Andrew, as well as Cole Henry.

Here is the scouting from Baseball America (subscription required) on Henry on the 80/20 scale:

“He shows pitchability that you want in a front-line starter,” Assistant G.M. of the Nationals, Mark Scialabba said. “We are very excited to have Cole. … And then to get Cole Henry where we did [in the second round], where we felt like that was a great job by our scouts as well, someone that is certainly a first-round-type talent. ”

The 21-year-old is listed at almost the identical size as Cavalli at 6’4″ and weighs in at 10 pounds less than the Oklahoma product. When the Nats drafted Henry, they liked his height and build. As far as Henry’s repertoire goes, he is a 3-pitch guy with both a 4-seam and 2-seam fastball as well as a changeup, and he throws a curveball for his breaking pitch. What Nats fans will like is his changeup looks like a fastball out of his hand and is a good swing and miss pitch. As a young player, he has not gotten into the advanced pitch analytics much.

“Honestly haven’t gotten much into Trackman or Rapsodo,” Henry said. “I think they are great tools to help develop your pitches but in my opinion I think a lot of folks get caught up in too much of the spin rate and all that and forget the basics of pitching and what makes you successful as a pitcher.”

“I just try to be the best pitcher and person I can be every single day! Just try to focus on me and let everything else take care of itself!!”

If you follow Henry on his social media on Instagram and Twitter, you know his non-baseball hobbies are duck hunting and fishing. Like most kids his age he also loves video games. He should be at A-ball some time during the 2021 season.