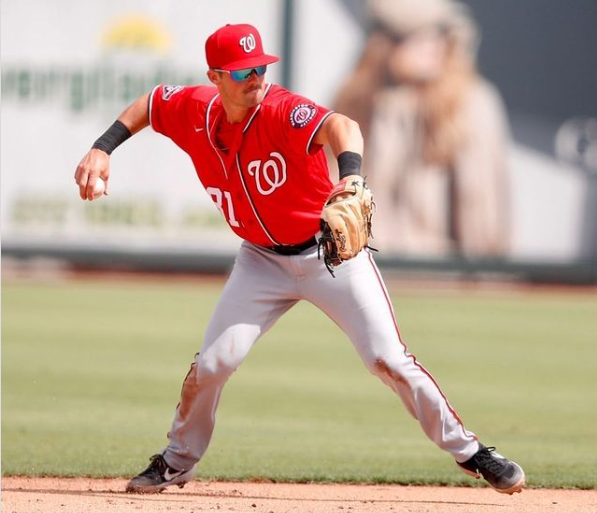 “It is always cool to see your hard work pay off and get some recognition for the progress you’re making,” Cluff told us. “The Nats have a lot of great players in the system so it’s humbling to be recognized up there with some of the best.”

Because Cluff signed quickly with the Nats, the left-handed batting shortstop was able to get into 62 games in the 2019 minor league season with the Single-A Hagerstown Suns. There was certainly an acclimation period to pro ball as Cluff’s K rate was high and will be something he will have to work on to get the strikeouts down and make more contact. Right now it is not an issue, but Cluff is very old for being an A-ball player at 24 and needs to start moving up levels in the minors.

“Obviously the transition to professional baseball was a big step up,” Cluff said. “Pitchers are much more polished and have better velo. You always have to have a plan at the plate or you will get exposed in every at-bat. You also have to be able to make in-game and in at-bat adjustments.”

This will be a pivotal year after the COVID shortened development cycle for all minor leaguers last year. Cluff, who was added late to the Nats’ Alternate Training site in 2020 impressed his coaches. Cluff’s fielding really caught the eye of the evaluators as well as his athleticism.

The evaluators at Baseball America had this to say about Cluff:

TRACK RECORD: The Nationals’ player development staff was pleased to add Cluff to the system as a 2019 sixth-round pick for just $200,000. The quick, twitchy athlete served a two-year Mormon mission but didn’t miss a beat upon his return to Brigham Young, where he hit .327/.458/.518 in his draft year. Cluff made his pro debut at low Class A Hagerstown and chased too many pitches en route to batting .229/.320/.367 in 62 games. The Nationals made him a late addition to their alternate training site in 2020.

SCOUTING REPORT: Cluff primarily worked on hitting to all fields at the alternate site, where he was challenged by more experienced pitchers. He has sneaky power in his bat and is improving at getting the barrel to the ball. He tends to get pull happy, which takes away his ability to line the ball to the gaps and rack up doubles and triples. Cluff is an advanced defender with a strong arm who is capable of sticking at shortstop. The Nationals rave about his makeup.

“The alternate site was really cool for me at this stage in my development,” Cluff said. “Aside from the talent being the highest level I’ve ever been around, so was the preparation and maturity. It was insightful to see how older players carry themselves and prepare for practice and workouts. I learned a lot through conversations and also just watching the older guys go about their business.”

With the Nats strategy of getting players like Cluff to the Alternate Site, it served as a much higher level of competition for a player like Cluff who the Nats hope learned a lot from the intense coaching there. Other players were impressed with Cluff’s defense in the infield and his strong arm. Clearly the defense is there, and if he can get his contact rates up, he could be a real asset for the Nats in the future.

“I would say my top tools are my defensive ability,” he said. “I can pick it at short and I have a great arm. However I feel that my biggest asset to my game is my drive to be better and knowledge of the game. It allows me to work hard to prepare and trust that preparation when the time of performance comes.”

When Cluff is not playing baseball, he enjoys being with his family. It was his father, a former minor league player who has been his mentor and still works with him. Cluff’s other go to sport is playing golf as he likes the outdoor life and says he loves camping.