Point-CounterPoint: Who Is the Backup First Baseman? 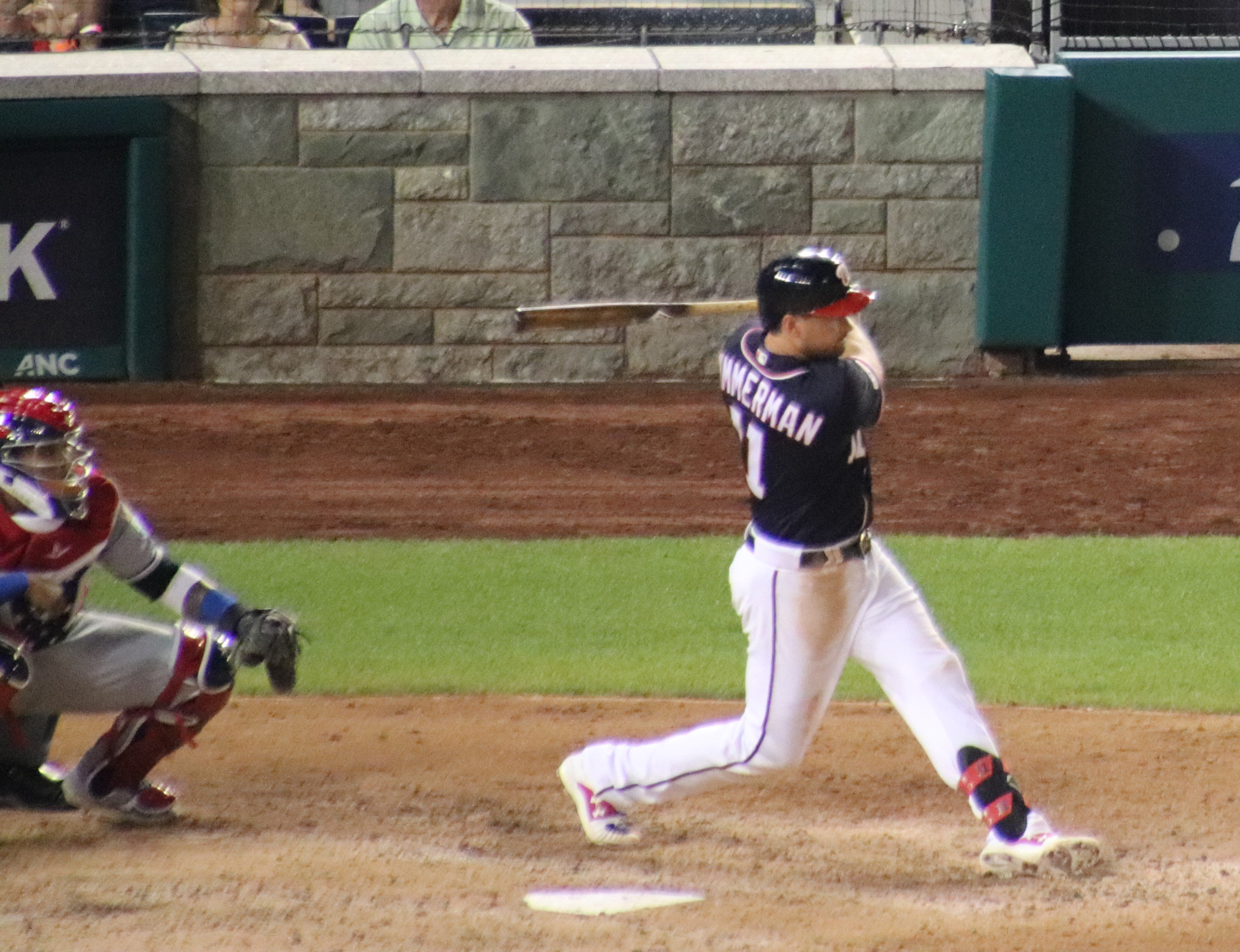 Don: So lets talk about who the backup first baseman should be. I think we both agree that someone new needs to brought in to take the bulk of the At Bats. But who should the back-up be.

Steve: Sounds like a topic the TalkNats folks will like to discuss. I’m expecting it will be Ryan Zimmerman over and Asdrubal Cabrera (UPDATED – Howie Kendrick retired, yes, we started writing this over a week ago). But it wouldn’t shock me to go Droobs over Zim due to “positional flexibility” that Rizzo has always coveted in bench players. Actually, this will be the offseason that almost nothing will surprise me.

Don: Well, before we dive into the discussion, lets make sure to add a couple of polls: one assuming there is a DH and one assuming no DH in the NL.

Steve: It will be interesting to see the difference.

Don: I have to admit that while I would be OK with any either of them, I would like to see Zimm get one more season. IIRC it was last year at this time that we collaborated on Days of Rest – Why Only for Pitchers? Could the Howie system work for Zim?

That analysis was based on the Game Logs from Baseball-Reference as I was unable to download the 2019 Game Day data. As I said in our last Point-CountPoint, Point-CounterPoint: Lineup Protection? How Valuable Is It? Part 1 of ???, I resolved whatever the problem was. You mentioned a lot of ideas to take advantage of the additional detail. Perhaps revisiting days of rest for Zimm and looking at other factors like

Steve: Well the most obvious one to look at is whether the opposing pitcher is a lefty or a righty? We’ve known for a while that Zim kills lefties; but he has had serious platoon issues with some right-handed pitchers (not all).

Don: Agreed. I ran a report which shows Zim’s splits by the combination of Days Rest and whether the pitcher is a right-hander or a left-hander. And it does appear he does better with a day off the day before against right-handers. The results for more days off are not good; but there is not much data there. Perhaps other factors play into those results. Or it could simply be the result of limited data.

Note that I did highlight the rows corresponding to right handers. 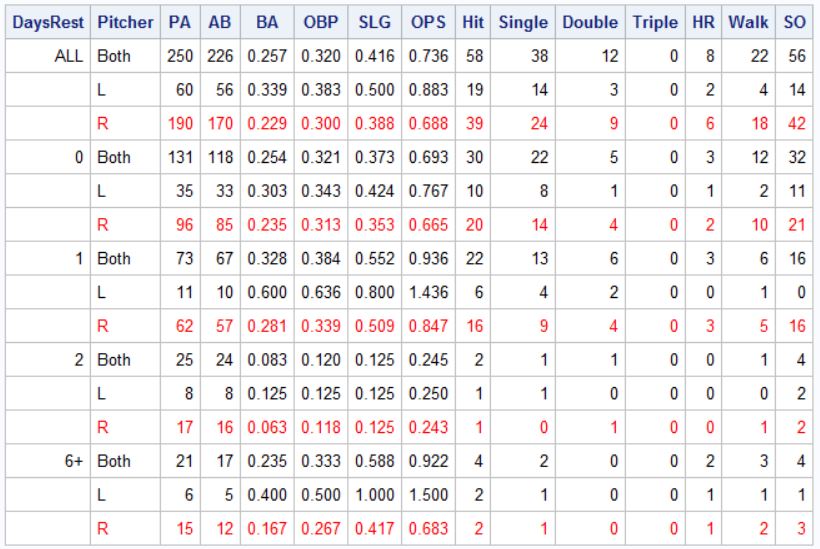 Steve: Once again you have really shown that the “platoon” full-story has a lot to do with rest patters. Zim has done well with just that one day of rest but 2 days of rest seems to mess him up — sure, I know the data size of extra rest is not huge but that is still encouraging for 57 plate appearances.

That almost says that he should literally be playing every other day regardless of who is pitching but of course as we know he kills lefties overall and maybe you should consider playing him back-to-back if a lefty is on the mound and then sit him.

This is great stuff to ponder.

Don: Absolutely. I’m, intrigued by these results. The data analyst in me wants to first drill down on breaking this out by RISP and number of outs in the inning. Number of outs is easier to determine. So let use look at this further.

Seems like there is an issue when there are no outs. Perhaps I need to drill-down further to see if there are additional insights. 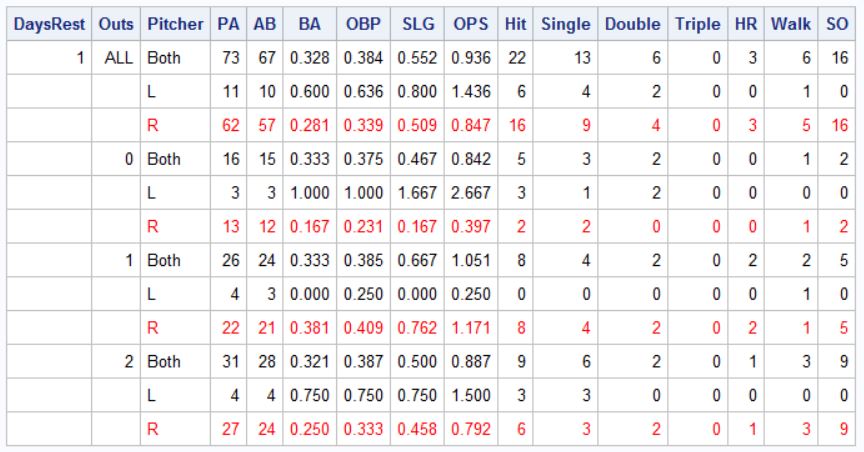 Steve: The results with no outs intrigue me. I can live with the numbers for either 1 or 2 outs at the beginning of the AB. This is great and I hope you have additional charts and research.

Don: So I decided to drill-down on the 16 PAs with zero outs. I wondered if there was a difference due to being the lead-off hitter vs. having whoever batter before him in the inning got on base. There are three ways he could bat with no outs: leadoff, someone on base, bases empty because the prior batter hit a HR. I did not see any pattern there – so time to move on and look at RISP.

Steve: So Zimmy might not be as good when he hits leadoff to start innings or something going on there but probably more to unlucky BABIP.

Don: So I decided to look at more than RISP splits based on the opposing pitcher. I decided to check out RISP (runners on second or third), and what I called KTLM (Keep The Line Moving – in other words someone on base), along with each patterns of runners on.

Before I continue, as you know it took me over a week to figure out how to deal with the [expletive deleted] Game Day runners data. Maybe karma was at work here because, as you know, we originally were going to include Howie in the mix (and the above polls).

I finally got it working and the only difference from the BBREF results is how to handle stolen bases during the plate appearance. I used the bases status as of the beginning of the plate appearance. It appears BBREF accounts for stolen bases (as well as caught stealing). I could not do that because the GameDay data ties the runner data to  plate appearance and not an individual pitch. Regardless, the differences between the results below (which do include the post-season) and BBREF are pretty minor. So here is part one of the results. 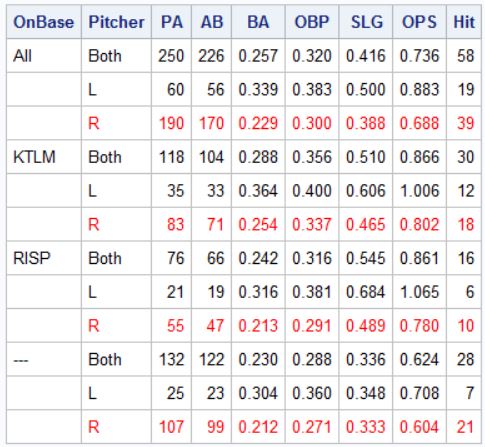 While the differences are not at all as dramatic as what we talked about last year for days of rest, take a look at his OPS for KTLM (men on base). And his SLG for both KTML and RISP vs. no one on base. I recall reading a Boswell chat (it might have been an article) a few years ago and he commented that Zimmerman told him that he will sometimes waste a plate appearance if no one is on base or it is not a critical one in order to gain additional insights into the pitcher. I wonder if that might be what is going on here?

Steve: Love the “Keep The Line Moving” stats and what we don’t see are the productive outs. The stats against lefty pitchers are fine and I bet over his career there are RHPs that Zim hits great and that is why pure platoons aren’t smart. It is matchup baseball that works.

I don’t understand the whole concept of wasting a plate appearance but Zim has a habit of taking first pitches to see what the pitcher looks like. Jayson Werth used to do that in Spring Training where he wouldn’t take the bat off of his shoulders for an at-bat. Someone had a name for it but I can’t recall what it was. Something like “cataloguing.” That is fine I guess in Spring Training.

Don: Zim taking the first pitch much more often is another one of those myths that I believe I shot down a few years ago – the percentage of time he took a called first strike was only a tiny bit bigger than the Nats team average. I will have to look at that again at some point. It was more than a few years ago. Likewise, now that I have figured out the structure of the runner data and how to process it, productive outs is something else I could look at.

And here is the breakdown by what bases are occupied. 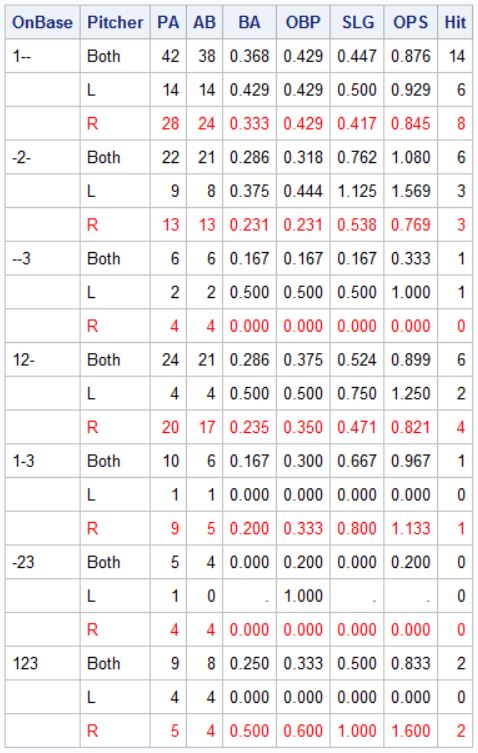 The data is pretty limited broken down to this level of detail. But I have to say some of them are encouraging. Especially bases loaded against righties vs. lefties.

But not sure it makes sense to draw any conclusions from this.

Before continuing, the statistician in me has to do a bit of a Rant about small sample sizes. We do not have a small sample size – because we don’t have a sample. We have all the data. The reason analysts hate drawing conclusions from small samples is because they might not be representative of the entire population and it may not be appropriate to generalize from a small sample to a larger population. What we have here is limited amount of data – but we have all of it. Rant over.

Steve: It is really hard to conclude much there. Zim certainly had that time when Joe Maddon got in his head that he struggled in bases loaded spots for a while it seemed and this at least shows he had some success with bases loaded which was a good sign. Zim used to thrive when the pitchers back was against the wall and as he infamously said in a commercial, “the pressure is on the pitcher.”  And he is right. Bases loaded has the pitcher’s back against the wall and in most spots with runners on-base that is the case. Getting back to the tables, I think data samples of less than 20 gets skewed so much by BABIP that it is hard to conclude anything. Two more groundouts that find holes turns a 0-4 to a 2-4 batting .500.

Don: I agree on BABIP. But again that is the problem with a limited amount of data. That is why I always try to find a reason (like the comment about Zim wasting pitches for plate appearances that are less important).

Steve: I wouldn’t be surprised if the Nats go with Mitch Moreland as the lefty first baseman because of the cash outlay, but I want more upside and would go with Kyle Schwarber as the lefty at 1st base and if he can’t hack it from a defensive POV then that is where having Asdrubal Cabrera makes sense. Again, I think with a 26 man roster you could get Schwarber, Droobs and Zim. It is also a hedge if you go Andrew Stevenson in LF and it doesn’t work that you move Schwarber out there.

The bench is Josh Harrison, backup catcher, Droobs and Zim plus one more in that scenario.

Don: Since Droobs is a switch hitter BBREF standard stats are going to show us how he did against lefties vs. righties. Here are his L/R splits from 2019 and 2020 respectively.

As I have commented before, I am not a fan of Schwarber at first. He has something like 5 games at first in his entire career – and I don’t think any since 2017. But if you are going to do that, having someone who can be a defensive replacement for him late in the game is important. From that perspective, I would prefer to have Zim or perhaps Harrison in that role.

Bottom line, I am glad that it is Rizzo making the decision on the backup at first.

Steve: It has to be a tough decision for Riz and he alone will have to make it. Like I said with Kendrick retired, it makes it somewhat easier if he wanted to bring both Zim and Droobs back. It probably means that the last spot depends on whether or not Stevo is the starter. If he is not, then he gets the final bench spot.

This entry was posted in Cabrera, Kendrick, Point-CounterPoint, RyanZimmerman. Bookmark the permalink.
← Previous Article | Next Article →