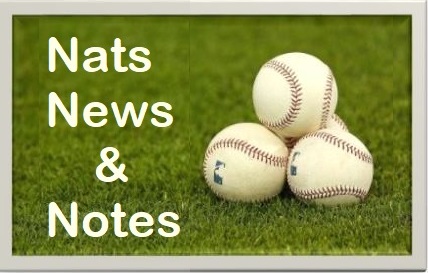 The day after the World Series always goes from those highs and lows of the final game of the season to the reality that free agency becomes official. A total of 160 free agents officially hit the market and are now technically unemployed. The help wanted signs at Nats Park were removed as the Washington Nationals filled all of the vacancies on their  2022 coaching staff with a name nobody had on their list: Ricky Bones.

Surprise surprise and welcome to the official first day of the off-season as the Hot Stove is simmering. Not much will happen on the Hot Stove as we are a month from the CBA expiring, and teams just will not make any major moves before then. This could be a very long off-season.

Here are their official titles for 2022:

Additionally, DiSacrina will take on infield defense, and Young will take on baserunning and outfield defense as their other responsibilities. We do not know what Blanco’s role will be as a strategy coach as the press release did not go into great depth. Blanco will work with the catchers on their defense, and that is a newly created position on the coaching staff to add that spot.

We covered the hirings of Coles and Young. With regards to DiSarcina, he is 53 years old and was known as a conservative third base coach with the Mets.  Don’t expect a lot of sends with runners unless he is sure they will make it to home safely. With the Mets in 2021, they ranked the fifth best in baseball with only 11 runners thrown out at home. Previously, DiScarcina was the bench coach for the Mets in 2018 after he held that position with the Red Sox. He has considerable experience as a MLB infielder before he entered coaching.

Also coming over from the Mets is Bones. The 52-year-old former big league pitcher for 11 seasons will take the bullpen coaching job which was the same role he filled for the Mets from 2012–21 except for part of the 2019 season when he served as a pitching coach in the Mets Minor League system. Long before that, Bones was the original pitching coach for Single-A Potomac of the Carolina League in the Nats first season in 2005.

Sources had told us before, and we reported here that F.P. Santangelo‘s final year with MASN would end when his contract came up for review after the season. Today, Santangelo made it official that he would not be returning to MASN per several posts on his Twitter account. Others from the media posted that his contractual option was not picked up. One writer tweeted it was based on “performance” but we were not able to confirm that with our sources.

Santangelo started as a color analyst on Nats broadcasts in 2011 and was there for all of the winning years for Washington. During the 2021 season, he was off the air twice due to serious allegations that surfaced online of sexual harassment. That was investigated by MLB and deemed inconclusive.

The team and MASN will start a search for Santangelo’s replacement and sources tell us the preference would be for the person to be a former MLB player with ties to the Nationals organization. We already suggested Drew Storen and Gio Gonzalez who would both fit. In Santangelo’s absence, they had former-Nat Justin Maxwell on the mic. He would seem like a logical choice, but he is finishing up his degree at the University of Maryland’s school of Dentistry. Other names: Jayson Werth, Zimmerman, and Daniel Murphy. There are probably a dozen names out there, but the job is not easy. Maxwell struggled to feel comfortable behind the mic before he got going.

Additionally, we were told that Bob Carpenter who does the play-by-play for MASN would return for the 2022 season.

The MLBPA promptly posted the free agent list of the 160 players across MLB who are now unemployed. The Nats have five players on that list with the newly retired Alex Avila as well as Ryan Zimmerman, Jordy Mercer, the Baby Shark — Gerardo Parra, and Luis Avilan. Ticketed for free agency was Alcides Escobar who signed a one-year extension with the team to avoid becoming a free agent.

Here’s the official Free Agent list. Kind of crazy to see Freddie Freeman‘s name on that list. 160 in total and a few have voluntarily retired like Alex Avila, and many will contemplate retirement — some due to no offers and some like Ryan Zimmerman must decide their own fate. https://t.co/bPUhXxptRr

Keep in mind there will be dozens more players who will join the ranks of free agents through DFA’s, mutual and team options that are declined, and non-tenders.

Expect more news to follow on some of these!

This entry was posted in CoachingStaff, MikeRizzo, NewsAndNotes, Roster. Bookmark the permalink.
← Previous Article | Next Article →