Super agent Scott Boras has a birthday today and is 69! 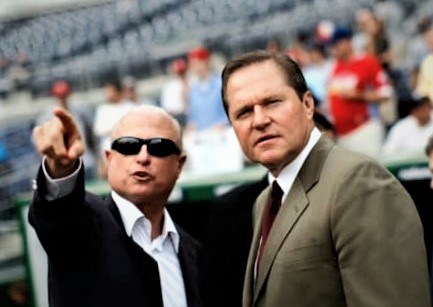 Like him or not, there has never been a sports agent who has transcended the modern game more than Scott Boras. Now a new collective bargaining agreement is being negotiated in Major League Baseball, and you would expect Boras will have a lot to say about that, both publicly and privately.

At one time on the Washington Nationals roster, he represented 60 percent of the starting pitchers with Max Scherzer, Stephen Strasburg, and Gio Gonzalez who switched to him as his agent. Boras represented 100 percent of the Nats starting outfield at one time with Jayson Werth, Michael Taylor, and Bryce Harper along with backup Brian Goodwin who was another of the Nats former first round picks. On the infield, he had 50 percent of the players from that 2016 team with Anthony Rendon and Danny Espinosa. If one player left, it seemed like another moved in like catcher Matt Wieters. And don’t forget this fact,  Boras represents their greatest player in Juan Soto.

The Nats and Boras have been tied together since the day the team signed Strasburg in 2009 to the largest draft contract in history. It has been one of those relationships that feels like a whole lot of taking by the agent and giving by the team in a one-sided relationship with favors given along the way by the Nats. If Boras needed a favor, he had a direct line to the patriarch of the Lerner ownership group in Ted Lerner. There was the time the Nats signed Boras’ client Rafael Soriano to the largest free agent deal ever for a closer. Sure, the Nats needed bullpen help at the time, but there were better and cheaper fits for the Nats. Not only did it appear to be an overpay, the Nats had to forfeit their first round pick in the 2014 draft because of that signing.

The mind-boggling signing of Matt Wieters deep into spring training of 2017 was the another head-scratcher. He arrived injured, and was a complete bust for the team considering his combined Fangraphs WAR over his two seasons with the team was a -0.8. The Nats paid him $21 million.

There were certainly rumors that Boras was running the Nationals which prompted a Washington Post article titled “Does Scott Boras run the Nationals?” The answer clearly was no but he wielded a lot of influence, and mostly because he was an agent at one time for six of the Nats top seven players.

“We represent a lot of high draft picks, and we have three or four of them here,” Boras said back in 2015. “Now, those high draft picks are very talented. They develop a core, and now they start seeking our free agents. So you get this period of time where you have a culmination of draft and free agency, and then it creates a volume of players on the team.”

While the Nats seemingly appeared to be bending over backwards at every turn for Boras, the team also took hits in bad press. The way Harper left for free agency with news leaking about what the Nats offered or didn’t offer was another case of a public relations nightmare as it was handled poorly. Then the following year after winning the World Series, it was Rendon who walked for another mega contract and news leaked that Rendon was not happy with the chartered jet service during the postseason. What? Of course the Nats signed Strasburg to the largest free agent pitching contract at the time for a right-handed pitcher and that contract, let’s just say, has not performed.

“Everyone in DC knows special cherry trees create revenue bloom to get it done,” Boras said when trying to convince everyone the Nats had enough money to sign both Strasburg and Rendon.

If it felt like every contract was there to squeeze the last nickel out of ownership, it certainly felt that way. Some would say that is an agent’s job. But first and foremost, an agent’s job to represent their client in their best interest.

On today’s team, Boras controls only four active players in Soto, Strasburg, Keibert Ruiz, and Josh Bell. As one of our readers, SPArn, pointed out that after Ruiz was traded to the Nats in July, he changed agents. Interesting, huh? In the minors, Boras has Seth Romero who has fallen out of the top-10 prospect rankings. Boras appears to have control over Cristian Vaquero who the Nats will be signing as the top international amateur player. Vaquero had deleted all of the photos of himself in Boras logo’d clothing and coincidentally a new photo appeared yesterday after we made a twitter comment to that point. So yes, it looks like the Nats will be tied to Boras past even Strasburg’s contract if Vaquero stays with the Boras Agency.

As Boras turns 69, he has to be looking to a succession plan as to his future as Father Time is undefeated. When Boras turns 80, Juan Soto will only be 34 years old. Vaquero’s birth date was September 13, 2004. He just turned 17, and when he turns 34, Boras would be turning 86. You seriously have to wonder who will represent these players into the next decade. The elder Boras has reportedly been grooming his son Shane to take over, but will players want Shane negotiating their next deals? Could you see Shane circumventing a general manager to call straight to a team owner like his father was known to do?

“Obviously, Boras goes to ownership for the same reason that Willie Sutton robbed banks: because that’s where the money is,” Peter Schmuck once wrote.

When CAA Baseball was in their early years in the baseball agency business, we saw them change the head of their baseball operations three times in the last dozen years as Casey Close departed to head another agency and Brodie Van Wagenen took the helm until he moved into the General Manager’s role with the Mets, which did not last long. But players like Ryan Zimmerman and Trea Turner have not moved from CAA, rather they have stayed there through the change in top management. Can the Boras Agency stay relevant after their leader steps down?

With Vaquero, Ruiz, Soto and Strasburg, the Nats will be tied to Boras for many years to come, but the team no longer has over 40 percent of their active players controlled by one agent. Since Mark Lerner took over as the principal owner of the Nats from his father in mid-2018, the team won a World Series but has now suffered two back-to-back losing seasons and that Straburg contract written under the young Lerner’s control is looking like one of those major mistakes that the elder Lerner never had. While people debated Werth’s deal, it certainly was not a complete bust.

They say nothing ventured, nothing gained. You must take chances, and Lerner did that back on January 21, 2015 when the team signed Scherzer to the richest deal ever for a pitcher at $210 million. It was risky given Scherzer’s age and the fact he regressed slightly in 2014. It was probably the greatest long-term contract ever written in baseball and a +37.9 WAR over the term of that contract which expires this week. That contract was criticized by many when it was made official, and in a poll of MLB executives during Spring Training of 2015, Scherzer was voted as the worst free agent signing of that off-season by a wide margin.

“Ted Lerner went out and signed Max Scherzer,” Boras said, “and gave him a record contract, record years, and he was annihilated for it! They told him that was a mistake. That was an overpay!”

Yes, it takes two to tango. Love him, hate him, the relationship with Boras yielded Scherzer. Sure, the Nats paid the biggest bucks for him and if the Nats want to retain Soto, there won’t be any hometown discount. That isn’t how Boras operates, and by now you know that. Happy birthday Scott.