In Appreciation of Ken Griffey Jr. 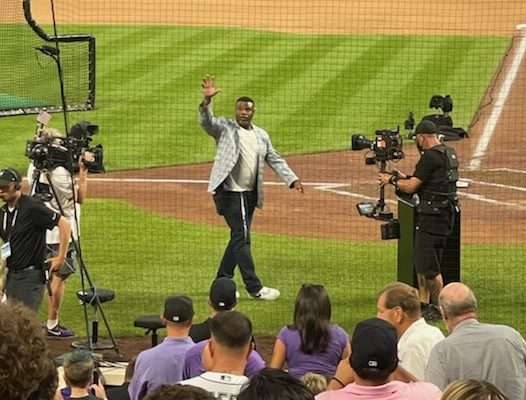 The coolest thing about the 2021 MLB season is that it’s reminded us what it’s like when a player transcends rooting interests, and really the sport itself. It was just a few years ago that the chase for Shohei Ohtani headlined the offseason (and disappointed Washington Nationals fans and every other fan base on the East Coast). Now, however, Ohtani is arguably the best all-around player in baseball — a superstar so magnetic you can’t help but root for him (even if we were glad to see Juan Soto take him out in the Home Run Derby!).

Ohtani’s rise calls to mind the small handful of players over the years who were impossible not to love, or at least admire: Derek Jeter, Frank Thomas, Pudge Rodriguez…. But watching the All-Star Weekend broadcast, a better comparison surfaced. Ken Griffey Jr. was present at the Home Run Derby and having the time of his life, in part by cheering on Ohtani directly! “The Kid” had no hesitation publicly recognizing the incredible phenomenon Ohtani has become, and frankly it was a ton of fun to witness the admiration. It was also so perfectly fitting as to have been scripted — because when we think about it, Griffey might just be the last player who generated this much positivity beyond his own fan base.

Frankly, we wish there were more players like this. But given the connection and the All-Star Weekend appearance, we figured the Summer Of Ohtani might just be the perfect time for a Griffey appreciation post. So we’re going to take a look back at just what made The Kid so much fun.

He Had His Own Video Game

Yes, it’s happened again since, but we really don’t see too many MLB games — or sports games in general — that revolve around individual players. Griffey had just such a release way back in March of 1994 though, and it was an absolutely glorious game. Those old enough (or enthusiastic enough about retro gaming) to have played SNES may remember it as arguably the best baseball game of its time. And even though it of course looks pretty dated by modern gaming standards, it’s still a ton of fun (you can play through emulators online). One more fun nugget: Griffey is the only named player in the game, with the other vaguely representing players of the day and sporting nicknames relevant to their franchises (like “Bambino” as the Yankees’ clean-up hitter). Downside: No Nats in a ’94 game….

And His Own Nike “Air” Sneakers

Another way in which The Kid’s popularity was more or less unique was that he inspired his own Nike Air line — not exactly the norm for ‘90s baseball players, Sure, plenty of MLB players marketed various baseball shoes, and yes, Jeter eventually became a brand ambassador for Jordan. But no one else had anything quite like the Nike Air Griffey Max 1. This was an iconic shoe among fans at the time, and actually returned in its original colorway this year, making for a fun summer sneaker for retro MLB fans. Check it out and we’re betting that even if you aren’t a huge sneakerhead, you’ll remember it.

Perhaps inevitably given his intense likability, Griffey also wound up appearing in a number of films and TV shows — which is also something we don’t see a whole lot from MLB stars these days. In addition to some other appearances, Griffey most memorably featured in The Simpsons (in the episode “Homer And The Bat”), The Fresh Prince Of Bel-Air, and Little Big League (in which he runs approximately 11 miles to rob a home run in a ridiculous but fun scene). For that matter, Griffey even featured in the Macklemore & Ryan Lewis video for “Downtown” in 2015. In all of these examples, he’s flashed the same star power he exuded on the field.

An Envoy, a Pilot, an Owner

It also has to be mentioned that Griffey has had an incredibly cool post-playing career. In 2008 — technically before Griffey retired — he was named a diplomacy envoy for the United States, essentially making him an official advocate for baseball and American values. A few years later, The Kid got his pilot’s license, and reportedly now owns and flies a Cirrus SR22 single-engine plane. And last year, Griffey joined the ownership group for the Seattle Sounders — arguably the most prominent professional soccer team in the U.S. Frankly, it sounds like it’s as fun to be Junior as it always was to watch him.

Above all else, Griffey had the swing. The reason he got his own video game, Nike shoe, and film roles is that he was just cooler than everyone else, and pretty much every fan of the game gravitated to his aura. But that aura also seemed to manifest, each trip up to the plate, in what will always be remembered as one of the purest swings baseball has ever seen.

Griffey may not overlap with most Nats fans’ baseball experience much, but he’s a fun reminder of what it’s like to simply be a fan of an irresistible baseball player. Guys like him are good for the game, and it’s starting to seem like we’re beginning to see more of them. Ohtani may be leading the way, but guys like Vladimir Guerrero Jr., Fernando Tatis Jr., and our own Juan Soto are proving to be similarly magnetic.

Whether or not any of them can become the transcendent star The Kid was remains to be seen.