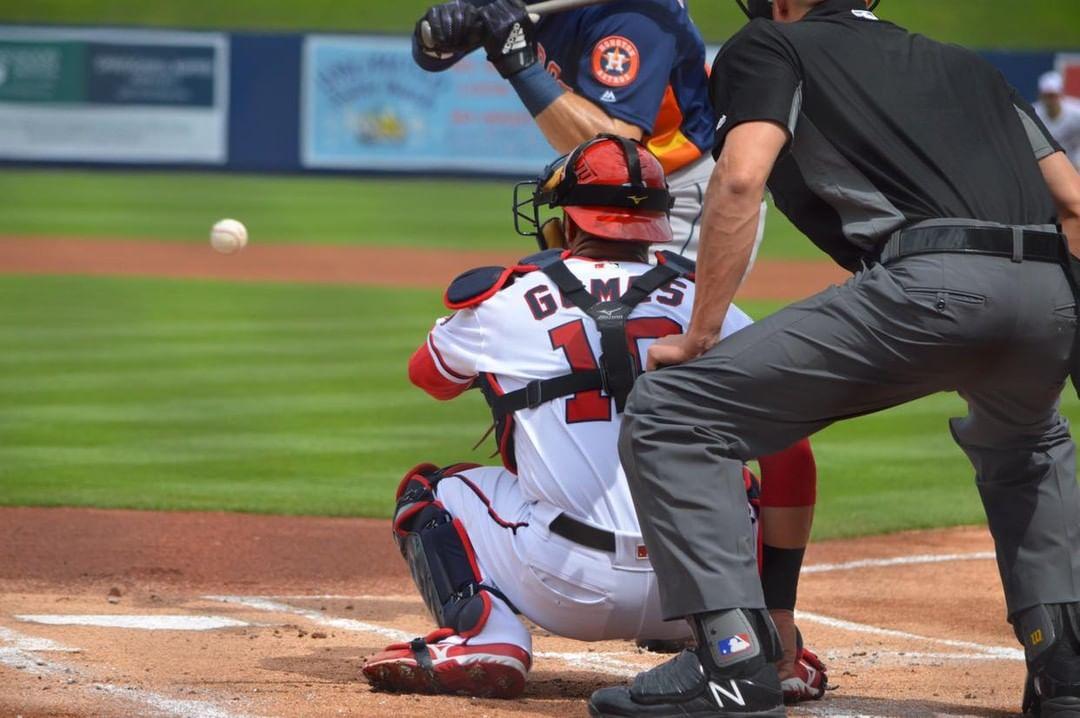 Yan Gomes has got this. (Photo by Tom Cicotello for TalkNats)

Time for Part 2 of what we started to discuss in Are Platoon Splits Almost a Certainty for the #Nats – 1 of 2. So lets look at 2B (Starlin Castro and Luis Garcia), Catcher (Jason Castro and Yan Gomes) and CF (Victor Robles and Andrew Stevenson).

Don: Just like our previous discussion, let’s start by looking at their splits against lefty vs. right handed pitchers.

In the tables that follow there are two sets of splits. The Each-PA splits are based on who the pitcher is for each PA and should match the Baseball-Reference splits (the first two lines of the platoon splits). I have included these splits here so I could validate the results by comparing the numbers I calculated with BBREF.

The Starter splits include all the PAs in a game based on whether the starter was a righty or a lefty. For example, if the starter is a lefty and the batter faced him twice and faced two righty relievers twice, in these tables all four PAs are listed in the Starter-L line. This is different from how BBREF calculates the splits it shows for starters and relievers.  My rationale for doing this is that when you construct a lineup you are going to pick which platoon player to start based on who the starter is and the manager won’t be able to switch back and forth later in the game based on whether the reliever is a righty or a lefty.

Signed with Houston. Leaving data in here for comparison purposes.

Andrew: What stands out to me immediately is that Starlin Castro has shocking reverse splits in 2020, and Luis Garcia actually hits lefty starters well and his struggles are against lefty relievers.

As we thought, Jason Castro would make a good matchup catcher with Yan Gomes. It is just finding the right matchups which is very difficult in the Nats system when pitchers like a certain catcher.  Stevo only had 8 PAs against lefty pitching and held his own for sure. Not enough to make a real assessment.

Steve: I did not realize that Luis Garcia‘s issue might be more focused on when teams brought in a lefty reliever to face him as Andrew also pointed out. That bodes well for him in the long run.

Don: I agree that Stevo’s data is limited and we need to be careful about how we interpret it (and whether we believe it) – but it is worth including.

Likewise Andrews comment about how he does against lefty relievers is pretty interesting.

I am not as convinced about Castro being a good match-up with Gomes. So let’s include Tyler Flowers as another possible match-up.

Steve: Crazy to see Tyler Flowers has reverse splits too in 2020.

And for anyone comparing the slash lines to the results above, there are minor differences due to the rounding issues when I adjusted the number of PAs to match the values shown in these tables.

Let’s look at second base first.

Don: If we get this level of performance out of second base, I will be quite happy.

Steve: I see something special in Luis Garcia. The way Keith Law at The Athletic scouted him based on his Double-A portion in 2019 is not indicative of the kid I saw in two straight Spring Trainings and then in his MLB stint in real games in 2020.

Law wrote about Garcia’s start to his MLB career, “There’s also been a lot of weak contact and some trouble adjusting to pitchers working him soft away, whether it’s swinging-and-missing or rolling over.”  Fact is Garcia did well on soft away going oppo over and over for hits and actually batted .406 on pitches over the outer-third of the plate in the zone. He struggled chasing below the knees and on the knees inside so kind of the opposite of what Law wrote.

If Garcia can improve on laying off below the knees (2-19) and low and in/middle (2-16), I think he is going to do great with adjustments and working some walks. I think the power will come with age and he looks like a player certainly in the 700’s for an OPS. The kid did well in RISP spots batting .293.  He was the youngest player in MLB when he debuted in 2020. 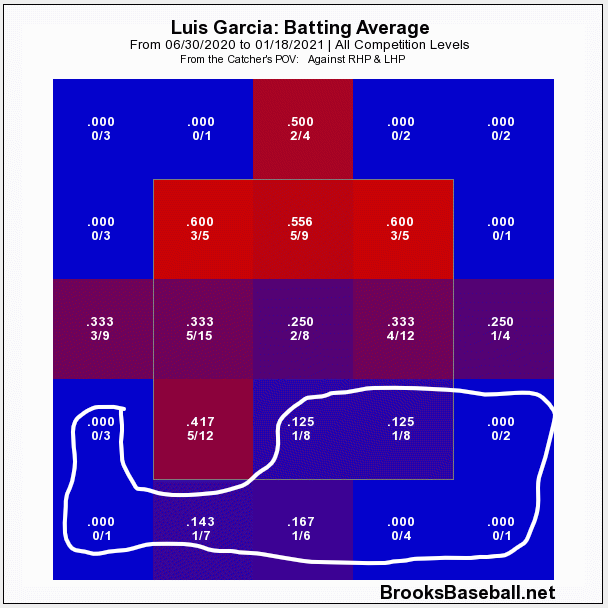 Andrew: That is all very interesting on Garcia and his charts. Remember that until the last two weeks of the season, he was batting over .300 and went into a week-long slump which brought down his final stats.

Don: I don’t see much benefit here to a traditional platoon with Castro. And simply splitting time is not good.

Steve:’ I just want to see improved catcher defense to make our pitchers look better. Until we get robo ump, the 4 years of going from Matt Wieters forward really exposed the need for better catcher’s defense in regards to framing/unframing and throwing out baserunners. Gomes looks to be the primary catcher. Who is acquired as the other catcher is a key. I’m not as concerned with splits because we know Gomes is catching Corbin and most likely Max and Stras will want one catcher to be their guy.

Andrew: the issue I’ve always seen with Nats’ catchers is that they seem to follow pitcher assignments and that makes offensive matchups to an opposing pitcher difficult.

Don: After seeing the numbers with Castro, I am more interested in whether we can get better performance with Flowers.

Don: Since both Gomes and Flowers are right-handed, the Platoon strategy makes no sense. The straight split of starts is better than the Gomes/Castro combination.

Steve: Correct Don. Catcher platoons just don’t work in the Nats system. Davey likes his pitchers to pick their catchers and you play on the day your pitcher is scheduled to pitch.

Andrew: I agree Don. This will be matchups with who the Nats are pitching I would think.

Don: And here are the numbers if we have Castillo for about 60 games and Gomes for the other 102 games. I hope Rizzo goes after Flowers. If not, maybe we need to have Castillo take all the games against lefties. But as you said Andrew, pitcher preferences complicate such a strategy.

Don: Frankly, I am not putting much stock in these numbers given that they are based mostly on Stevenson’s great run at the end of the 2020 season. If that is really what Stevenson is, these numbers are very encouraging.

Andrew: Stevo put up Hall of Fame numbers for 2 weeks. That is great if he can be anywhere close to a .300 BA.  I’m sure some smart matchups can come from this to get Stevo some regular ABs and Victor Robles some rest days.

Steve: Smart matchups is how this lineup can evolve and improve. On Opening Day, do you play Stevo against Jacob deGrom or go with Robles? That “matchup” test will come early if the schedule stays “as is” and the Mets and Nats square off on Opening Day. Stevo is 3-7 with 2 home runs against JdG and slashing .429/.500/1.429/1.929. Obviously not sustainable — but certainly part of the concept of matchups if you trust what you saw as the sample sizes usually are never large for matchup analysis. Robles is not awful against JdG, he bats .250 against him with a .774 OPS. Tough call.

Don: That wraps up this segment. Some great discussion points.

This entry was posted in Point-CounterPoint, Roster. Bookmark the permalink.
← Previous Article | Next Article →