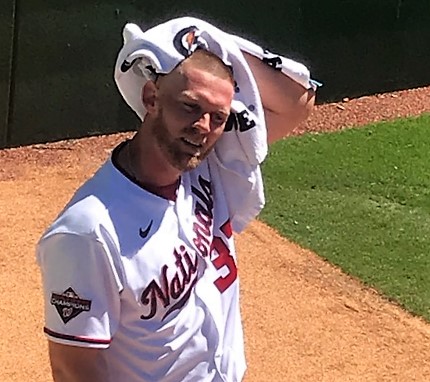 It took one year for the Nationals to plummet from the penthouse to the outhouse and much of it had to do with a truncated season that didn’t allow time for the injuries to heal at a time when the Nationals were going on a run — the season ended. The Nats went on a 7-2 run to finish the season. Who knows what would have happened if it were a 162-game season.  The experts aren’t sure what to expect from Washington this season and even the MLB odds being dealt at the best online sportsbooks have the Nats somewhere in the middle of the pack to win the NL pennant this year at odds of about +2000.

When one thinks of the Washington Nationals, the first thing that leaps to mind is the talented triumvirate of Max Scherzer, Stephen Strasburg, and Patrick Corbin leading the starting rotation. It is the three-headed monster that can decimate an opponent in a series sweep but if all cylinders are not clicking then all bets are off.

Now the team has reportedly added former ace, Jon Lester, to the starting rotation. This will make for an interesting combination for 2021. Last year, we all know that neither Scherzer nor Corbin were dealing as dirty as we’ve come to expect with the former ending with a less than stellar 5-4 record, a 3.74 ERA, and a career-high WHIP of 1.38, while the latter posted a 2-7 mark with a 4.66 ERA and a bloated 1.57 WHIP. And while they were struggling, their brother-in-arms, Stephen Strasburg, was waylaid by carpal tunnel neuritis which landed him on the injured list shortly after the 2020 season commenced.

After starting only two games and pitching just five combined innings, the 32-year-old Strasburg, who had just signed a seven-year, $245 million deal, would end with a 10.80 ERA and some very serious questions regarding his future. FanGraphs somehow has computed him for a 4.08 ERA for 2021. Throw out the meaningless 2020 season for Strasburg which ended almost as quickly as it started with that total of 5.0 innings for the season on his record. The man is a career 3.19 ERA.

It was a sobering 2020 campaign after a euphoric 2019 season that saw the Nats capture their first World Series title in franchise history. And they did it as a Wild Card entry which made it even sweeter. But last year the team ended in a tie for last place in the NL East with a 26-34 record.

However, reports coming out of the Nationals camp are that Stephen Strasburg is doing well after having surgery to cure the “dead thumb” on his throwing hand that was bothering him throughout last season.

Manager Dave Martinez stated back in September, “He’s home resting right now. He had sutures put in, he’s going to get them out next week, so once he gets them out, he’ll get reevaluated, and then we’ll go from there.”

“He’s definitely, he’s working out whenever he can,” the manager added.

“He’s got an unbelievable gym in his house, and he’s got somebody coming over to help him, so he’s working out the best he can, but he’s not going to throw for a while.”

And the reports were even brighter a few weeks ago when Washington General Manager and President of Baseball Operations, Mike Rizzo, spoke about Strasburg.

“He was just reexamined on the 4th of December,” Rizzo said. “He’s coming along great, he should be full-go for Spring Training.

“He began his throwing program a couple weeks ago and he’s progressing nicely, so we feel that he should be full-go by the beginning of Spring Training.”

“He’s thrown a little bit. Right now, we’re kind of at the point where we feel like he’s just at a regular winter, and just getting ready to build up for Spring Training.”

Should Strasburg, Scherzer, Corbin, Lester, and Joe Ross return to form, Washington could catapult to the top of the rugged NL East just as surely as they fell from grace last season.

On Christmas Eve the Nats traded a pair of prospects to Pittsburgh for thumper, Josh Bell, who has been penciled in as the team’s starting first baseman if there is no universal DH in baseball.

GM Rizzo commented on the deal, “When we looked at Josh, [his switch-hitting ability] was a big piece of what we were trying to do. He fits in that middle of the lineup somewhere — again, that’s a Davey conversation — but he fits in the middle of that lineup somewhere for us, and being a switch hitter only adds to his value as far as keeping the lineup long, making it more manageable for the field manager and a guy that we have high expectations for.”

Last Saturday, they inked another big banger in 27-year-old Kyle Schwarber to patrol left field this season. Davey Martinez was asked what his lineup would look like this season and he gave his cocktail napkin version on MLB Network Radio in the following form:

Slotting Soto as the Nº. 2 man in the lineup would get him more at-bats during the season but if Bell is to be hitting in the critical Nº. 3 spot then he better be hitting for average with Schwarber acting in the cleanup role.

And thanks to DonH who used his downloaded 2018-2020 Game Day data to show us what that lineup would look like for the season (684 PAs).

It should be an interesting 2021 for Washington and while they might not contend for a World Series title, at least we can be fairly certain they will be much better than they were last year.