Are Platoon Splits Almost a Certainty for the #Nats – 1 of 2? 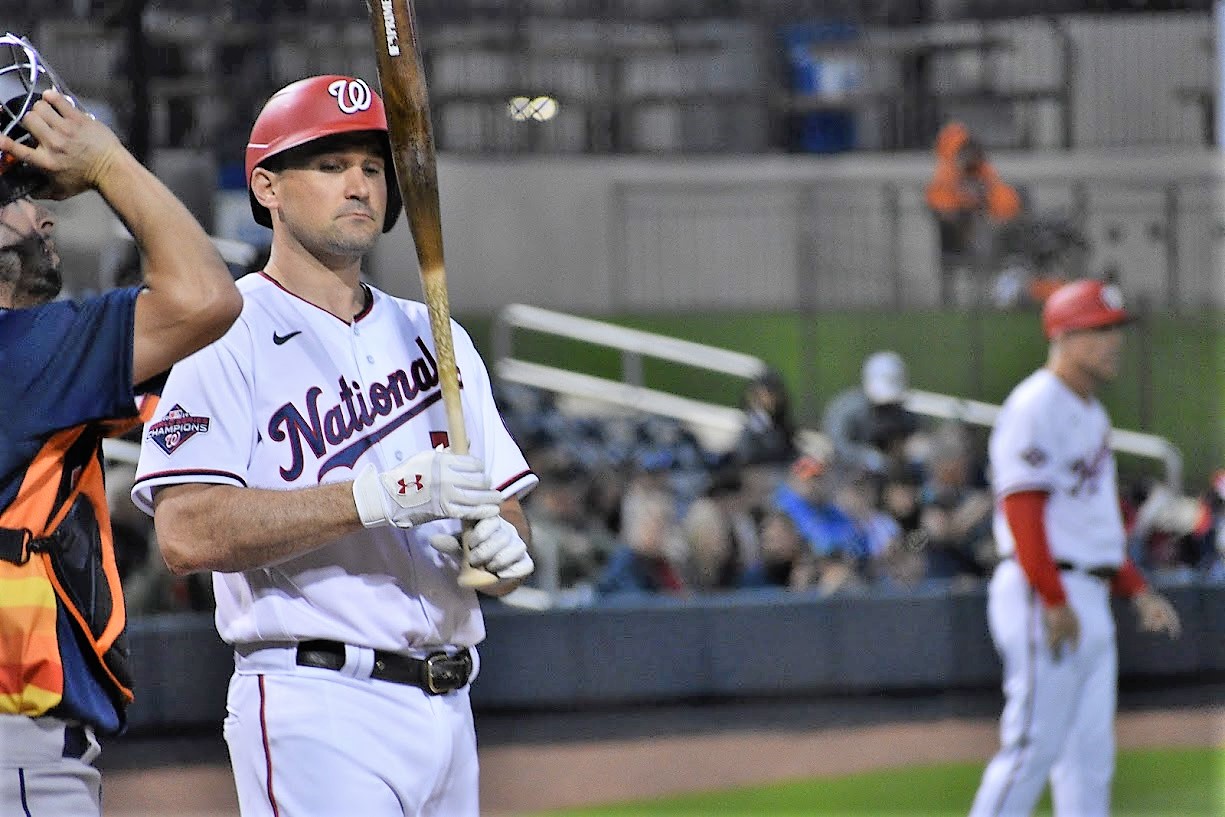 Ryan Zimmerman in 2020; Photo by Katie Moran for TalkNats

Don: So that is the question of the day. Given the budget, who the available FAs are; and lack of tradeable assets, platoons seem like the best/only option for the Nats. TalkNats commenter DChamps asked us to do:

Here is what I would like to see if you can do it is take 2019/2020 combined and do a platoon split to see what a  [Substitute Schwarber] platoon would look like with Pillar or Duvall. Do the same for Bell and Zim and Luis Garcia and Harrison and at catcher Gomes for 100 games and Jason Castro for 62 games and in CF Robles for 110 games and Stevo for 52 games.

Steve: Wow, I would love to see platoon splits or what Rizzo likes to call matchups for 2 players at the same position. Riz has never liked the pure lefty/righty thing. I think we have to determine how many at-bats those players would get because Duval and Pillar would play more than the 30 starts a year against lefties. This is also much different to look at since Josh Bell is decent from both sides of the plate as a switch-hitter.

Andrew: I think that is smart. This could be the Nats reality. My fear is that if they go with Schwarber that they play him too much.

BREAKING: Deferred by a day because the Nats have signed Kyle Schwarber. So we will replace Brantley with Schwarber in DChamps list.

Don: So let’s do this. We can start with Ryan Zimmerman and Josh Bell. That is the most likely since Bell is already on the roster and signing Zim as the backup is almost a certainty. So here is the logic for how I created these tables.

So let’s look at the results for our 1B split: Bell against righties; Zim against lefties.

Steve: One of my favorite points to be made is that a good platoon creates a “whole that is better than the sum of the parts.” Somewhere you find the matchups where there would be a righty who Zim might hit better than Bell such as Michael Wacha for just one example. So this does not have to be strict platoon for Zim to only face lefty pitchers if there is a matchup advantage. Zim for instance hits righty Aaron Nola at a .250/.273/.531/.804 slash while Bell has never hit Nola (0-8). There are other examples like Johnny Cueto, Zack Wheeler and Adam Wainwright who Zim hits better than Bell.

It is up to the Nats analytics to create matchups instead of pure platoons. It gets more complicated if the Nats were facing Vince Velasquez as both Bell and Zim hit him hard. That is a good problem to have.

The point is, these should never be pure lefty/righty platoons unless a batter just can’t hit same-handed pitchers. I can tell you that Luis Garcia for instance hit righties very well (.323/.356/.444/.800) but he was bad against lefties with only 5 hits in 35 at-bats and no walks. In fact, if the lefty pitcher had crossfire action, fuggetaboutit. The rookie had a 37.1 K% against lefties. Against righties, he was looking like a budding All-Star and that is the point here. Matchups work. That is why today I would start Garcia at 2nd base with Harrison partnering with him and slide Starlin Castro to 3rd base.

Andrew: Those Garcia numbers are eye-opening. I agree the word ‘platoon’ gets people agitated and it needs to be explained that the key is playing matchup baseball. It does not always work-out as you could still go 0-4 when the matchup was favorable.

Clearly you came up with some examples of when Zim should face some RHPs. The same could be done for every player, and should be. This is also great for rest schedules and to strengthen the bench.

As statistically strong as Houston was supposed to be, they didn’t pick good matchups for Brantley, and we all saw Dusty botch the matchups with Yuli Gurriel in the postseason in obvious spots where they should have pinch-hit for him. Those are the ‘little things’ as Dave Martinez calls them.

With all of this said, Rizzo has never really embraced matchup baseball, and I think he needs to with players who have shown clear split issues then as Steve says take advantage of matchups where you can no matter if it is righty-on-righty.

Don: I agree on the match-up discussion. What these tables are intended to do is to provide some insights. To truly do match-ups, more information is needed – and I am willing to to bet the Nats analytics team is doing just that. Doing similarity analysis on pitchers so they can be grouped in order to have more PAs to analyze.

I wonder how the Schwarber signing impacts whether the Nats bring Zim back. I could see it could go either way: bring him back because of how much better he is against lefties and why would you want to sit Bell against righties for Schwarber; or the roster spot has to be used for someone else.

But time to shift gears now and look at platoons with Kyle Schwarber. So lets match him up with Kevin Pillar, Adam Duvall and maybe even Josh Harrison.

Frankly, none of these jumps out at me as something I would definitely want to do. At first glance, Duvall seems marginally better – slightly better On Base (i.e., keeping the line moving) and a little more pop – but more Ks. The question is whether he or Pillar are worth signing give that splits with Harrison aren’t that much worse.

Steve: Defense and strengthening the bench is the further consideration. This is a good dive in the shallow end showing how platoon baseball in simplicity improves the situation while strengthening the bench. To repeat, this is how the Dodgers have reached 3 World Series in 4 years. Moving Joc Pederson and Kiké Hernandez around in platoons and playing to their strengths. They did it with Cody Bellinger until they felt comfortable playing him every day.

Most teams don’t do this because it is expensive spending money on a quality bench. You need good players to pull this off.

Andrew: Yes and some good points and this isn’t inventing the mousetrap, it is just copying what others have done and customizing it to your own needs. If you believe in analytics and have positions of weakness, you have a chance to improve a couple of positions with matchups. With a 4-man bench plus a backup catcher, you can’t do too much matchup baseball. The Dodgers did it regularly at 2nd base and in one outfield spot, and as Steve said it they used to do it with Bellinger also.

I could see the Nats doing this with Schwarber and with Garcia for sure. I think if you have the ability to do it with Bell some, you want to do it. What you don’t want to do is never let your players ever face same-handed pitchers which is why I like matchups. Garcia clearly has to keep improving, but yes, a .323 batting second baseman who is making league minimum is attractive.

Steve: Solid points. You can’t do this at every position. Doing it with Schwarber would hopefully also replace him with a better defensive player. Rest schedules are enhanced, and you then have Schwarber available off the bench as a potential switch-hitter. That is why this is a positive in total.

I’m also a believer in young Luis Garcia. People are assuming that Kieboom is the starting 3rd baseman, and I wonder why? He’s the one that has to prove himself. The 20-year-old Garcia came in and proved himself. Yes, he struggled mightily against lefties. Again, expose him less against lefties and get Harrison in there where he mashed lefty starters last year.

This isn’t traditional baseball and purists hate this type of stuff, but the Dodgers have proved that it works.

Don: This approach has not only been used and validated by other teams; it is also a matter of necessity for the Nats. It will also be interesting to see what they do if we end up with the DH in 2021.

In part 2, we can look at other splits. This post is already long enough; plus I need a little time to update the logic in my programs to add more flexibility to the subset of the data that the 25% gets applied to.

This entry was posted in JBell, MikeRizzo, Point-CounterPoint, RyanZimmerman. Bookmark the permalink.
← Previous Article | Next Article →