Official: Nats sign Kyle Schwarber as a free agent! Time to pencil in a new lineup! 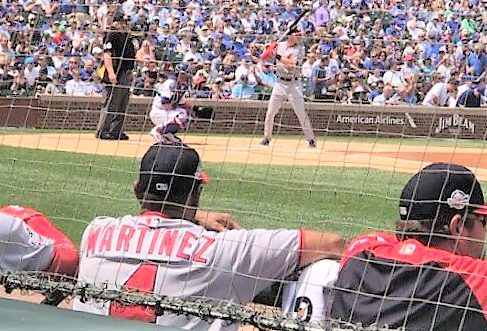 We had several scenarios for a Kyle Schwarber signing with the hopes he could play first base for the Washington Nationals. After the Josh Bell signing, the thoughts of adding Schwarber faded until rumors had surfaced from The Athletic’s Ken Rosenthal that the Nats were considering Schwarber in leftfield.

Today, that move came into focus as general manager Mike Rizzo has signed Schwarber to a one-year deal with a mutual option. He was recently non-tendered by the Cubs to become a free agent. A source told us that Nationals’ manager Dave Martinez was instrumental in his desire to add Schwarber to his lineup, and there was mutual interest for Schwarber to reunite with the Nats’ manager. Prior to 2018, Martinez was the bench coach for the Cubs and knew Schwarber well and was a key in converting him from a catcher to an outfielder. He also knows that Schwarber was defensively challenged in the outfield, but the need for big offense is greater. The Nats take a risk as Schwarber slumped with the bat in 2020 with regards to his .188 batting average — but he did manage a .308 OBP and a .701 OPS with his immense power.

“I love [Dave Martinez],” Schwarber said today on a ZOOM call. “I’m so excited to be playing for this guy. I know he’s a baseball guy. He cares about his players. He loves winning. He only wants to win, and I think we all saw how much he’s going to fight for his players and will fight for a win [like we saw] at the end of the ‘19 World Series, when coming freshly off that heart [issue] … . I think this is a perfect fit.”

The Nationals 40-man roster will be at 35-players with Schwarber added. The payroll with his reported $10 million salary ($7 million for 2021 and a $3 million. mutual option buyout) would balloon to $177 million overall and almost certainly guarantees that the payroll heads over $180 million and most likely gets closer to the $190 million level because there is a certainty that more players will be added to the roster.

Schwarber’s arbitration salary was projected to come in between $7.01MM and $9.3MM. Most felt that $7 million was his number and he beat that by 40% if the Nats total deal of $10 million via the option getting turned down. All of that changes if the mutual option is picked up then the deal would seem like a good deal at $7 million. We will not know the outcome on that until about 10 months from now. 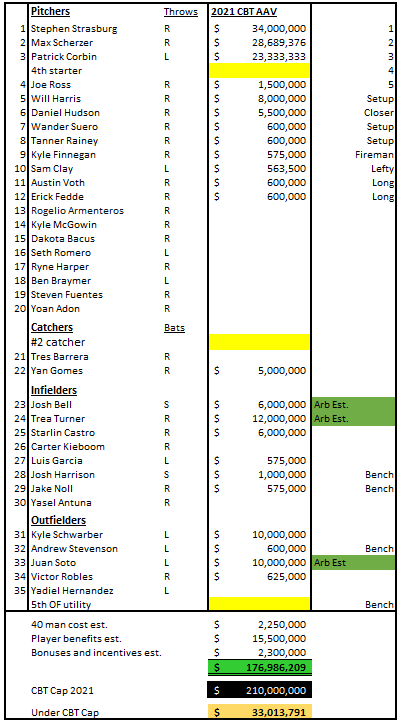 The fine people at FanGraphs have already added Schwarber at a +2.1 WAR as the primary leftfielder, and his acquisition moves the Nats to the 85 win level (.520 win %) and the fifth best team in the National League, but as Stever20 points out, if MLB does not expand the playoffs to at least three wild card teams, the Nats would not make the playoffs as the Padres and Braves would grab the top two Wild Card spots.

The Schwarber signing is about upside after a downward tilt in 2020. His Statcast indicates numbers could support the case for that upside with a bounce-back season given his hard contact at 92.8 mph which ranks him in the top 5 percent in baseball. If you are one of those who believes in bad luck BABIP, his .219 BABIP and .302 wOBA should support that he will bounceback in 2021.

Based on the today’s roster, we think the lineup could look like this:

That lineup has Garcia at second base because he should platoon there given that he hit .323 last year against right-handed pitching. You could play Carter Kieboom at second base or Josh Harrison to really turn second base into a position of strength. With the Schwarber acquisition, Andrew Stevenson, gets moved to more of a bench role.

Most feel that it would be Kieboom starting at third base and Castro at second base. Clearly, I disagree with that.  Also, Ryan Zimmerman looks like a fit for the bench, and then you have to add a backup catcher. If Kieboom or Garcia starts the season in the minor leagues, you could see a right-handed fourth outfielder added like Adam Duvall or Kevin Pillar. If you look at Schwarber’s stats, he has struggled against left-handed pitchers in his career at a .197 batting average while he hits righties at .239 with a career OPS of .859 versus an horrific .650 against lefties.

In an interesting twist, the 2015 All-Star Futures game had Trea Turner, Josh Bell, and Kyle Schwarber all on the same USA roster. The Sporting News named them as three of the seven prospects in the game who impressed. In fact, Schwarber was named the MVP of the Futures game, and Turner received votes as the runner-up. Today, those three players are teammates on the Washington Nationals. Speaking of All-Star games, Schwarber participated in the 2018 Home Run Derby at Nationals Park and advanced to the finals against Bryce Harper, who won narrowly 19–18.

“I’m excited to move on to Washington here and make new chapters here. I know it’s a one-year deal, but I told [Mike Rizzo] when we talked on the phone, I said, ‘I’m not approaching this as a one-year deal. I’m going to come in, I’m going to give you everything I have, and I’m going to play as if I’ve been here for five years and still got a couple years left.”

“I’m going to give you everything I’ve got and I’m going to invest myself into winning. That’s what I want to do here.”

While that statement feels like a one-year rental, there is an option attached to it, and if Schwarber is spectacular the Nats could always slap a qualifying offer on him as a free agent. You can bet that Nats’ hitting coach, Kevin Long, already has a plan for him as well as Davey Martinez has a plan on improving Schwarber defensively like the Nats did with Juan Soto.

If there is a designated hitter in 2021, this move makes a lot more sense. Schwarber will naturally slot into the mix as the emergency third catcher. But also keep in mind that general manager Mike Rizzo and manager Davey Martinez could have other plans for this lineup.

This entry was posted in DaveMartinez, MikeRizzo, Starters. Bookmark the permalink.
← Previous Article | Next Article →