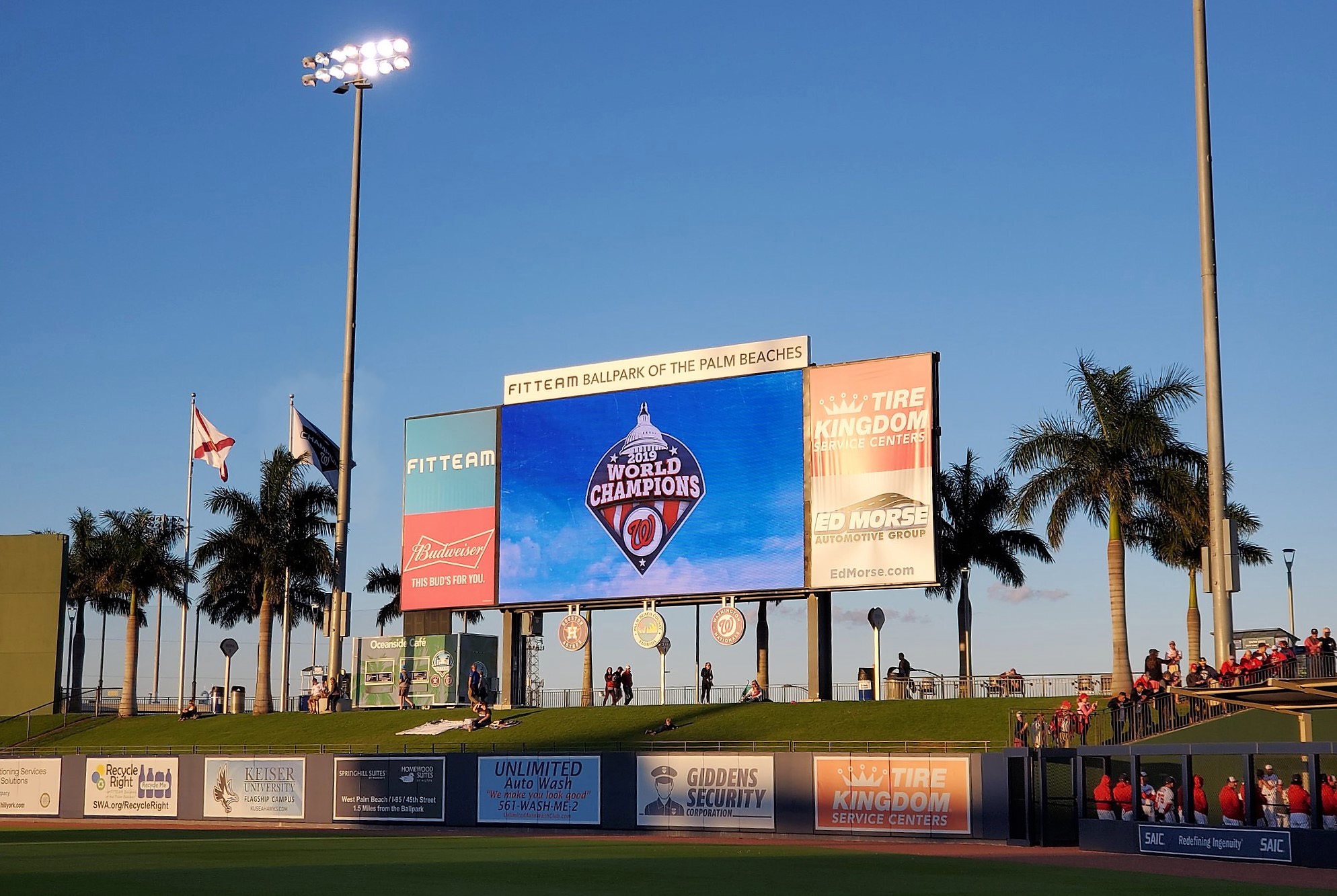 Max Scherzer warms in the bullpen as the World Series flag blows in the wind; Photo by Steve Mears for TalkNats

Can you believe it has been exactly one year since the Nationals won the World Series! Savor it, enjoy it. They do not happen often — even when you spend so much money that you blow through the CBT cap to win. It took a good team with incredible chemistry and veteran leadership along with some youthful exuberance and some divine intervention from the baseball gods.  The “CLANG” heard ’round the world courtesy of Howie Kendrick put the final exclamation mark on it.

One year ago today…

Howie Kendrick hit the CLANG! heard ‘round the world.#NATITUDE pic.twitter.com/U38UXHT3vf

Remember those days when the Nats spent to win it all with what they thought was their best team assembled in 2016? It did not happen. They tried again in 2017 and busted through the cap and in 2018 they were over cap even after they traded off veteran players. The 2019 roster had no Daniel Murphy, Gio Gonzalez, or Bryce Harper. Two-thirds of the trio of bullpen arms they dubbed, “The Law Firm” were gone. The 2019 team added Patrick Corbin as their most substantial acquisitions and a bunch of fill-ins as the team absolutely was committed to staying under the CBT cap.

That is the thing about baseball — you just never know. After the disappointment of the 2018 season, the jury was still out on Nationals manager Dave Martinez. Some gave him a “rookie” pass for an 82-80 season and stunts like bringing camels to Spring Training camp to signify the Nats needed to get over the proverbial hump.

The back of the bullpen was built with Sean Doolittle who was the only returning member from “The Law Firm” and it was his second full season with the Nationals. Rizzo added  reclamation players like Trevor Rosenthal and Kyle Barraclough to the bullpen and it was a disaster.

Rizzo sort of replaced Harper’s production in WAR (wins over replacement) by adding several players including a sizable upgrade at catcher where the struggling Matt Wieters was replaced by Kurt Suzuki and Yan Gomes. It was a bold move by Rizzo to not try to replace Harper with just one player but with several in the theory that the sum of the parts were greater than the whole. But Riz was also betting that Rosenthal, Barraclough, and Brian Dozier would all be better than what they were in the prior year, and in Rosenthal’s case — he didn’t even play in the 2018 season as he was recovering from Tommy John surgery!

Rizzo went big risks equals big rewards with the acquisitions of Rosenthal, Barraclough, and Dozier, and it was mostly disastrous. Not only did Rosenthal and Dozier add $16 million to the payroll, they were a gamble when other alternatives were available. Rosenthal finally recorded an out in his 5th appearance of 2019 and his ERA of infinity finally had a whole number of 72. That is the equivalent of giving up 8 runs per inning if you want the math there. Rosy and Bear Claw would not survive the season as both were sent packing. The warning signs were there in Spring Training, we were sounding the alarms before the 2019 season started as there were signs of trouble that we wrote about. With Dozier, he had his moments of glory and finished the season with a WAR of +1.6. He was relegated to the bench after Asdrubal Cabrera was acquired off of waivers, but that demotion never seemed to dampen his spirits. Dozier’s greatest value to the team was perhaps that he was a treasured teammate and a fan favorite and his fluency in Spanish bridged a normal divide in clubhouses between American and Latino players.

But everything wasn’t rosy in April and May. Martinez’s head was on the chopping block and if the Washington Post had their way as judge, jury, and executioner, Martinez was as good as gone. The reason I wasn’t on the “Fire Davey” bandwagon at 50-games was that my sources said Davey still had the support of the players.

Maybe  “los viejos” were a reason for a more cohesive clubhouse. This 2019 team had an existing group of veterans led by Max Scherzer and Ryan Zimmerman plus a new set of veterans like Howie Kendrick, Anibal Sanchez, Fernando Rodney, Brian Dozier, Gerardo Parra and Patrick Corbin, and they were preaching to stay the course. Instead of pressing, they went in the opposite direction and were celebrating home runs and victories while not dwelling on the losses.

Going from 19-31 to a World Series win, and finish the regular season plus the postseason at 105-74 is amazing when you think about no team in the last 100 years has ever won a World Series when they were at least 12-games under .500. It was improbable, and the Nationals had a 3.4% chance of making the postseason and less than 0.1% chances of winning the World Series after the game on May 23rd according to Baseball-Reference.com.

The Nationals in-house video production group known as Curly W Productions put out their own documentary entitled “IMPROBABLE” in two parts.  This was not the same MLB Production documentary that debuted in December. While the MLB Production was not centered on the Nationals and opened in the kitchen of Astros’ shortstop Carlos Correa before the first game of the World Series, “IMPROBABLE” was all about the Nats even though included the journey from the lowest point on May 23rd straight to the World Series victory.

Sometimes you appreciate the top of the summit more when the climb was the toughest. That was the 2019 Washington Nationals, but as Ryan Zimmerman, Stephen Strasburg, and Anthony Rendon can tell you, the failures of 2012-2018 factored into making this look back so much sweeter.

“Remember where you were” one year ago tonight! Re-live the @Nationals World Championship & Game 7 starting at 6pm on @1067theFan with bonus commentary from @CharlieSlowes & @DaveJageler at key points. Plus @JTtheVic’s post season highlight montage!

Hopefully you can listen to Charlie and Dave on the radio or watch a Game 7 replay of the World Series or one of the documentaries and relive that joy all over again! Happy one-year anniversary of the greatest time ever to be a Nats fan!