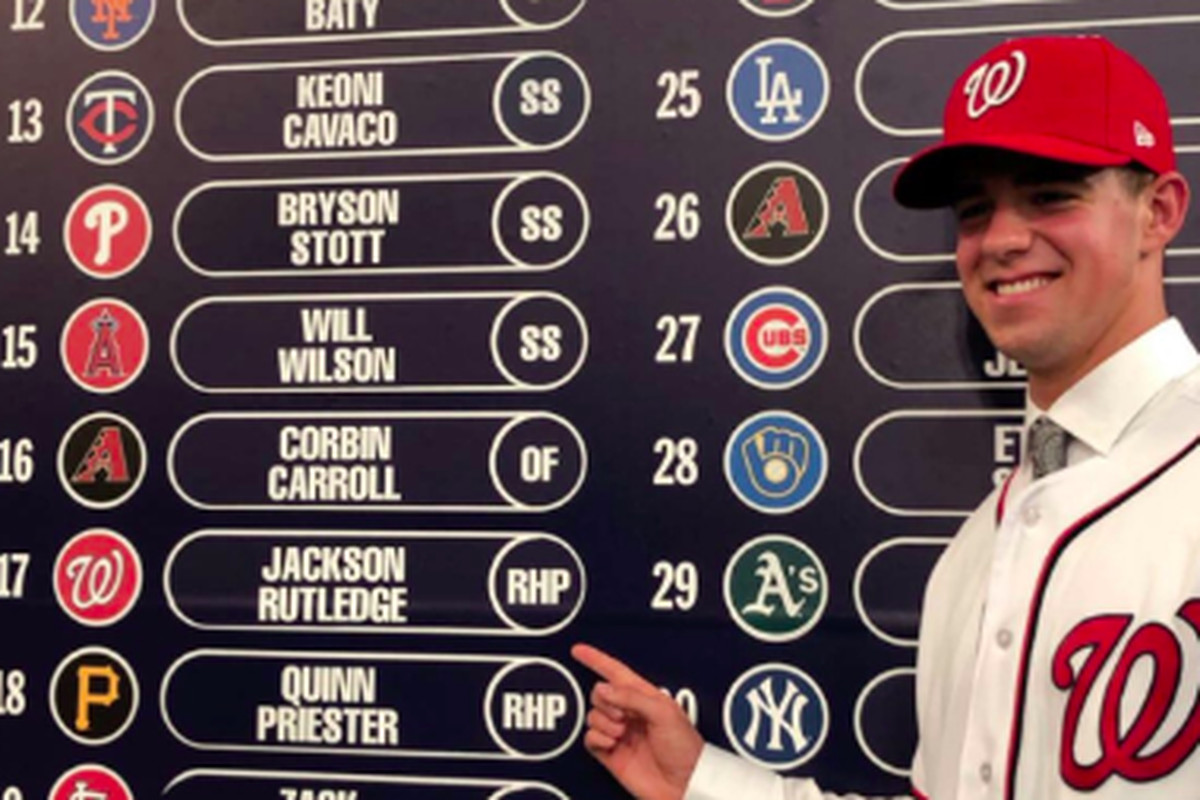 Rutledge was the Nationals’ top draft pick in June 2019. (MLB)

Two more Nats prospects graduated to rookie status in 2020 when they passed over the  130 at-bat threshold that defined their career in terms of officially categorizing them as rookies. Both Carter Kieboom and Luis Garcia are off the 2021 Washington Nationals prospects list as they will matriculate to the next levels in their pro careers. The new prospect list is led by Jackson Rutledge in a Top-10 that features all pitchers in MLB Pipeline’s rankings. Over at Baseball America, they have not published their 2021 list, but here is their mid-season report which still listed Kieboom and Garcia on top of the list and Drew Mendoza ranked 8th.

With a tight economic situation in baseball, what would happen if general manager Mike Rizzo wanted to make a trade for a key player instead of spending tons of cash for a top free agent? The Nationals farm system is ranked among the bottom five weakest in baseball, and while that is subjective, the issue is that this team has not fully developed a star pitcher for their own system since Stephen Strasburg who arrived as a finished product in the 2009 draft from San Diego State. You would almost have to go back to Jordan Zimmermann who was drafted in 2007 by the Nats. You could stretch it some to say Tanner Roark was developed by the Nats; however he never really reached that “star” level. The team still has Joe Ross, Erick Fedde and Austin Voth at the MLB level with the hopes of turning into top of the rotation pitchers, but most see them as back of the rotation fill-ins. Ross only has two years of team control remaining.

What are the Braves doing “right” in their farm system where they have developed Max Fried, Mike Soroka and Ian Anderson? Yes, they developed Alex Wood, Julio Teheran, and Sean Newcomb before them and Mike Foltynewicz was developed over time at the Major League level. Correct, their pitchers also have shown an early burn-out and the sample sizes are not large enough to crown them as having the answer. The Dodgers have a similar development system that recently produced Dustin May (3rd round draft pick), Julio Urias (international signing), Tony Gonsolin (9th round draft pick), and Walker Buehler (24th overall pick).

In the 2021 draft, the Nats will pick the highest they have picked since 2011 when they chose Anthony Rendon at 6th overall. The Nats will draft 11th overall which is a function of the team’s first losing record since that 2011 season.

A solution has to come from drafting well and developing those draft picks as well as the international signings. Clearly it is not easy, but the talent is there from Rutledge to the team’s top draft pick this year in Cade Cavalli. Both have advanced pitches and the ability to get to the top of the Nats’ rotation. There is further first round pedigree there with Seth Romero and Mason Denaburg. Additionally, Cole Henry, Andry Lara, Eddy Yean, and Tim Cate have promise. There are very good reliever prospects in Matt Cronin and Holden Powell on the list.

Now the void on the prospect list is position players. The Nats have shown the ability to develop position players. They put the finishing touches on Trea Turner, and Juan Soto could be the best bat in all of baseball. The jury is still out on Kieboom and Garcia, but based on my scout’s eye, Garcia looks like he could be very special. Looking down the list of position players, there is Mendoza, Yasel Antuna, and evaluators think the teenager, Jeremy De La Rosa,  could be a real gem. The Nats hope 20-year-old catcher Israel Pineda turns into a star.

We reported this week that Jackson Rutledge is now represented by Paragon Sports which has a long list of star players like Christian Yelich, Jeff McNeil, Aaron Nola, and Dustin May. Nats fans will probably recognize Craig Stammen on their client list among the many names.

There is certainly hope here for some stars to emerge. This is still a better farm system than the barren mess the Lerner’s inherited when they bought the team in mid-2006 and quickly created the number one minor league system that was part of Ted Lerner’s vision. Now they must build it again with Ted’s son at the helm. 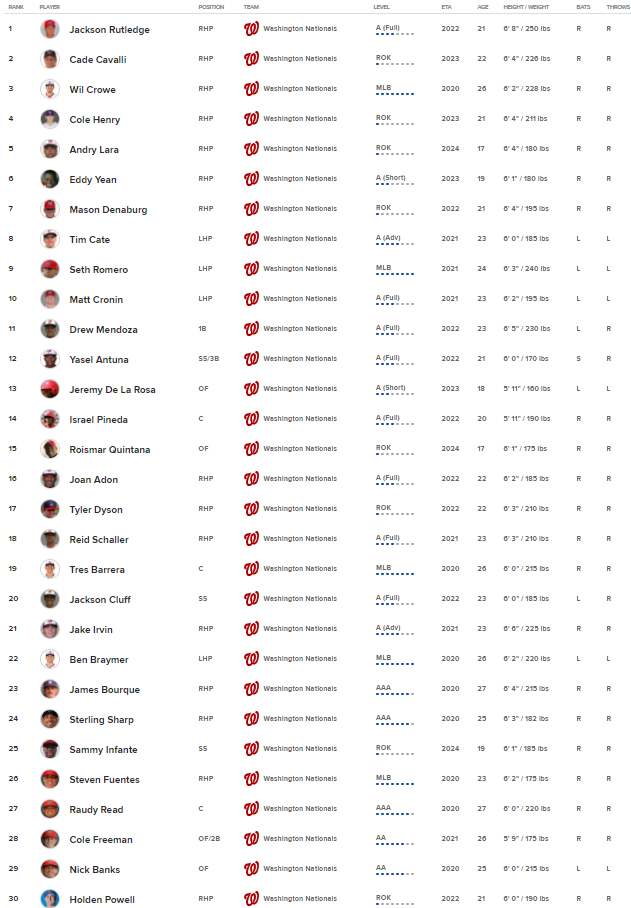