The Nats were built for marathons and short sprints; Officially eliminated, what’s next? 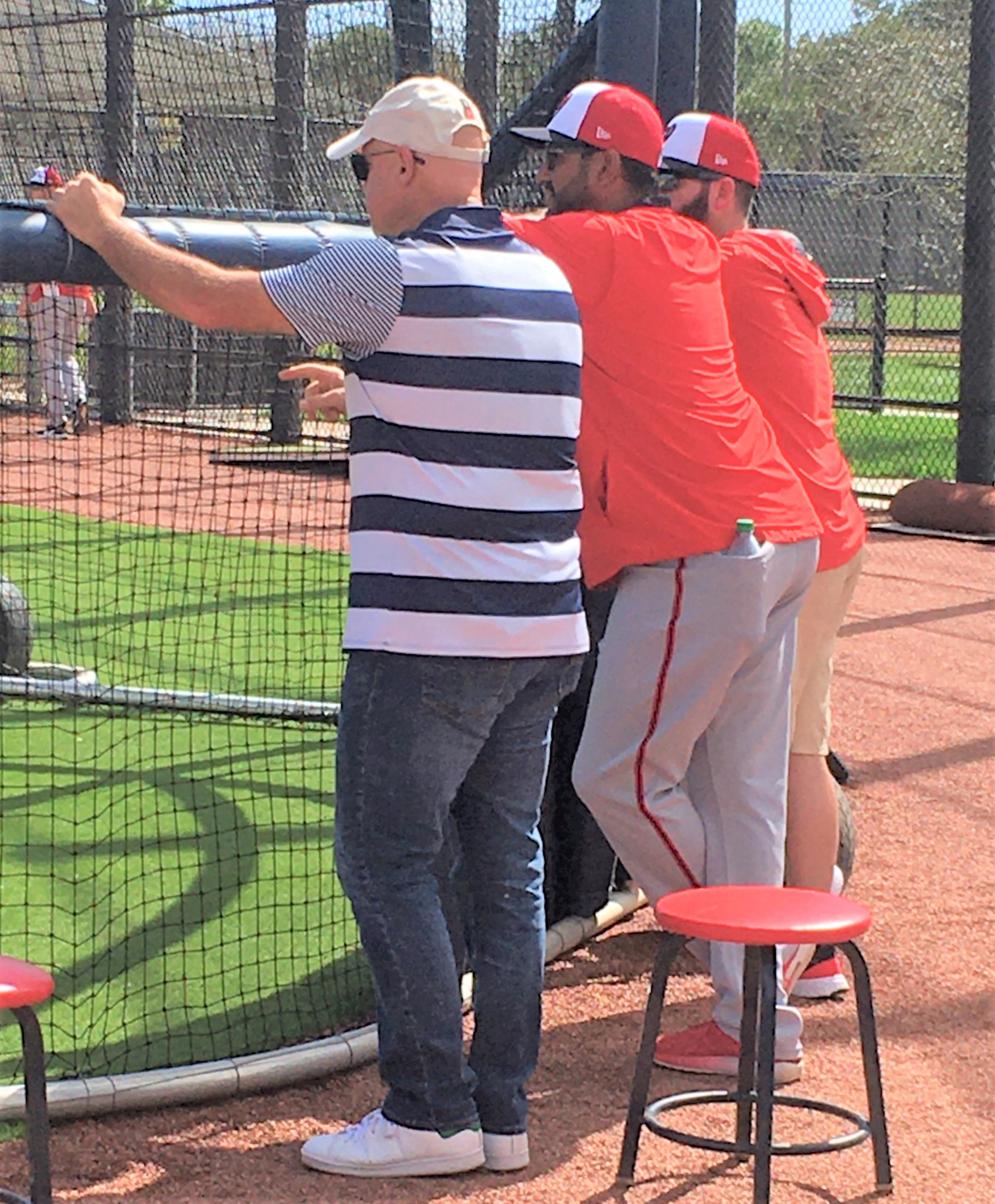 You probably heard that the Washington Nationals were officially eliminated from the postseason late last night. Not a shocker at all when you start a 60-game season at 19-31.

The next time you see the Washington Nationals after Sunday, it will probably be Mike Rizzo and his manager standing behind a batting cage at one of the practice fields at the FITTEAM spring training complex in West Palm Beach, Florida. While we expect that manager to be Dave Martinez — it is not official at this point in time.

The roster is a huge question mark going into 2021 in terms of turnover and the budget and who Rizzo will target for acquisitions. We know who is under team control for next year, but some of those players could be let go either under declined options, non-tenders, DFA or trades.

When shaping a roster, you never know which way a player will go with his own plan. We saw Ryan Zimmerman and Joe Ross opt-out due to COVID concerns, and nobody would be surprised if Howie Kendrick and Kurt Suzuki head to retirement. Kendrick turns 38 next July, and Suzuki turns 37 in less than two weeks. Don’t forget Zimmerman’s 36th birthday is on Monday.

With this 2020 team that Rizzo built, it was crafted for a marathon season where an older squad would naturally lose players to the IL, but would return at some point. The losses of Stephen Strasburg and Starlin Castro were devastating to this team as were Sean Doolittle and Tanner Rainey to the bullpen. Add that to the opt-outs, and the time missed by Juan Soto and Howie Kendrick, and you can see why this team never really got firing on all cylinders.

Speaking of Soto’s missed time, he could have been a legitimate contender for the Triple Crown. He leads the NL in batting average, and has 13 home runs, and 37 RBIs in only 43 games. Averages are not a factor of games played but cumulative stats like home runs and RBIs are directly impacted by opportunity. Marcell Ozuna leads the league in home runs (17) and RBIs (53) on 214 at-bats. Not only was Soto held-out of games for that “fake” COVID test, but he also gets walked so much that he has only had 145 at-bats which is almost 1/3 less than Ozuna. Extrapolate that, and you can see that Soto should be considered as the MVP — but he clearly won’t win it. His 1.190 OPS leads all of MLB by a wide margin.

You also have Soto’s close cohort, Trea Turner, who has also put up MVP worthy numbers. Like Soto, Turner won’t win the NL MVP, but he will get votes deservedly. His combination of power and speed has made him a five-tool threat in baseball which is rare. Turner was leading the league in batting until he hit a mini-slump, but it looks like he will finish in the Top-5 for sure with a .339 batting average plus he has 12 steals and 10 home runs which is impressive in this truncated season that you can multiply everything by 2.70 to extrapolate to a full season’s value. With one more home run, Turner essentially would be a 30/30 man in a full season.

“I really believe [Juan Soto] should get many, many votes for MVP this year. Him and Trea both,” Nats’ manager Davey Martinez said in support of their great 2020 season.

Priority number one is tying up Davey for the manager’s role, and the second priority should be signing Trea Turner to a 7-year deal to make sure that Turner and Soto are together for at least 4 more years. Say it with me, at least 4 more years! This won’t look like an Ian Desmond extension at $100+ million because Turner is worth around $150 million to buy-out his last two years of arbitration and pay him mid-$20’s for the other five years. I could see $164 million at the high-end with possibly an 8th and 9th year option to bring it over $200 million. Very quietly, Turner is also the 26th top rated player in MLB in outs above average so he is doing it truly in all 5-tools.

The other priorities are coming into focus, and while it is not entirely fair to base decisions on a 33-to-60 game sample size on players like Victor Robles, Adam Eaton, Eric Thames, Michael Taylor, and even Carter Kieboom in his 33-game sample, it is far different to compare veterans to rookies. If you analyze on WAR, all of those players were negative WAR from -0.5 to -0.3. At some point, you have to turn the page and not look back. On Robles and Kieboom, the team’s development and analytical people have to figure it out.

If you look at locks for next year, you have a starting rotation of Max Scherzer, Strasburg, Patrick Corbin, and Joe Ross most likely. The bullpen locks are Daniel Hudson, Will Harris, Tanner Rainey, Wander Suero, Kyle Finnegan, and probably one or both of Austin Voth and Erick Fedde. The 2021 bullpen will carry 8 players and will need a lefty and Roenis Elias is still under team control with Matt Cronin in the wings and of course a possible re-signing of Sean Doolittle. The team could also look at converting Ben Braymer to a bullpen arm. While Seth Romero was part of the lefty bullpen in 2020 until he broke his hand, Rizzo said they are committed to sticking with him going forward as a starter. Sam Freeman was another lefty relief option until he tore his UCL ligament and will miss most if not all of the 2021 season. The glaring need is for a 4th starter for the rotation.

On the position players, it is much more murky with a need for a long-term answer for the catcher’s spot to partner up with Yan Gomes who has had a great offensive season. The team still controls Raudy Read and Tres Barrera for catcher’s depth.

Infielders are Trea Turner, Starlin Castro, and Luis Garcia with a need for a big lefty first baseman with some power who could hit in the middle of the order. The Nats also still control Kieboom and Jake Noll. You would expect either Castro or Garcia to shift to third base and most likely Castro who will be in his last year of team control.

For the outfield, Soto is getting a look in rightfield where he played for most of his short minor league career with just over 100 games there. You would expect Robles to get another chance at centerfield, and Andrew Stevenson to compete for playing time in 2021. The team has a great need to add another good outfielder with a big bat and the most popular name is Marcell Ozuna who has had a career year in a 56 game sample size, and former 3-time All-Star George Springer is another popular name. The Astros cheating incident and his injury history along with his .253 batting average might all factor into a bargain as compared to Ozuna. Could you imagine if that soon to be 30-year-old could repeat his 2020 season again? Unlikely, but Ozuna could be a leftfielder or DH for this Nats team and provide the righty thump behind Soto if Rizzo vetted him as a good “add” for this team.

“It could be a possibility,” Martinez said in his pre-game presser about Soto as a future rightfielder. “Use your imagination.”

The key is putting a big bat or two behind Soto otherwise the batting order could be Turner to Soto to Castro and that will cause Soto to be walked 150 times at least in 2021. Rizzo can fit that batter into a corner outfield spot or first base.

We named James McCann as a good free agent for Rizzo to start at catcher. McCann has advanced defensive skills and is an excellent framer as rated by Baseball Savant. Of course, at the end of the day if you added Ozuna, McCann, and a fourth starter (we named Kevin Gausman), you have to find a way to pay for those players. Other names discussed are Joc Pederson and Tommy La Stella who could be names further down on the list although both are lefties who would not fit as well as batters directly behind Soto in the batting order. 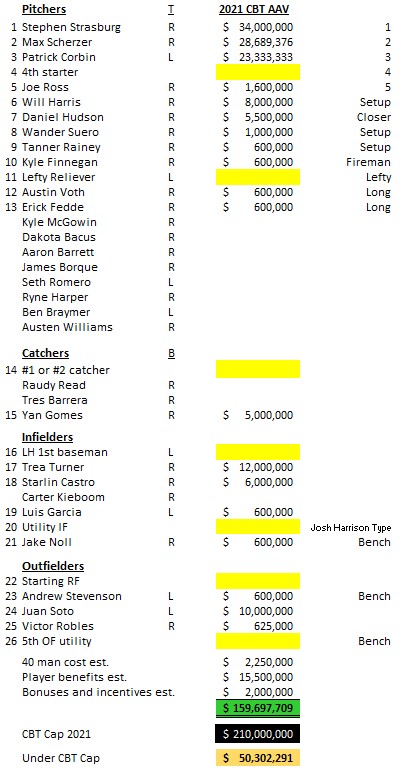 The future looks bright for the Nationals, and this team will be ready to compete again in 2021. While 2020 looks disappointing, it was only a 60-game season that felt more like an exhibition season that unfortunately counts. The Nats Report wrote this on 2020 The Lost Season.  There will be change with this 2021 team, and if there is any good news of a disappointing 2020 season is that the Nationals should be in a position to draft in the Top-10 of the amateur draft next year.

This entry was posted in Feature, MikeRizzo, Roster, SpringTraining. Bookmark the permalink.
← Previous Article | Next Article →