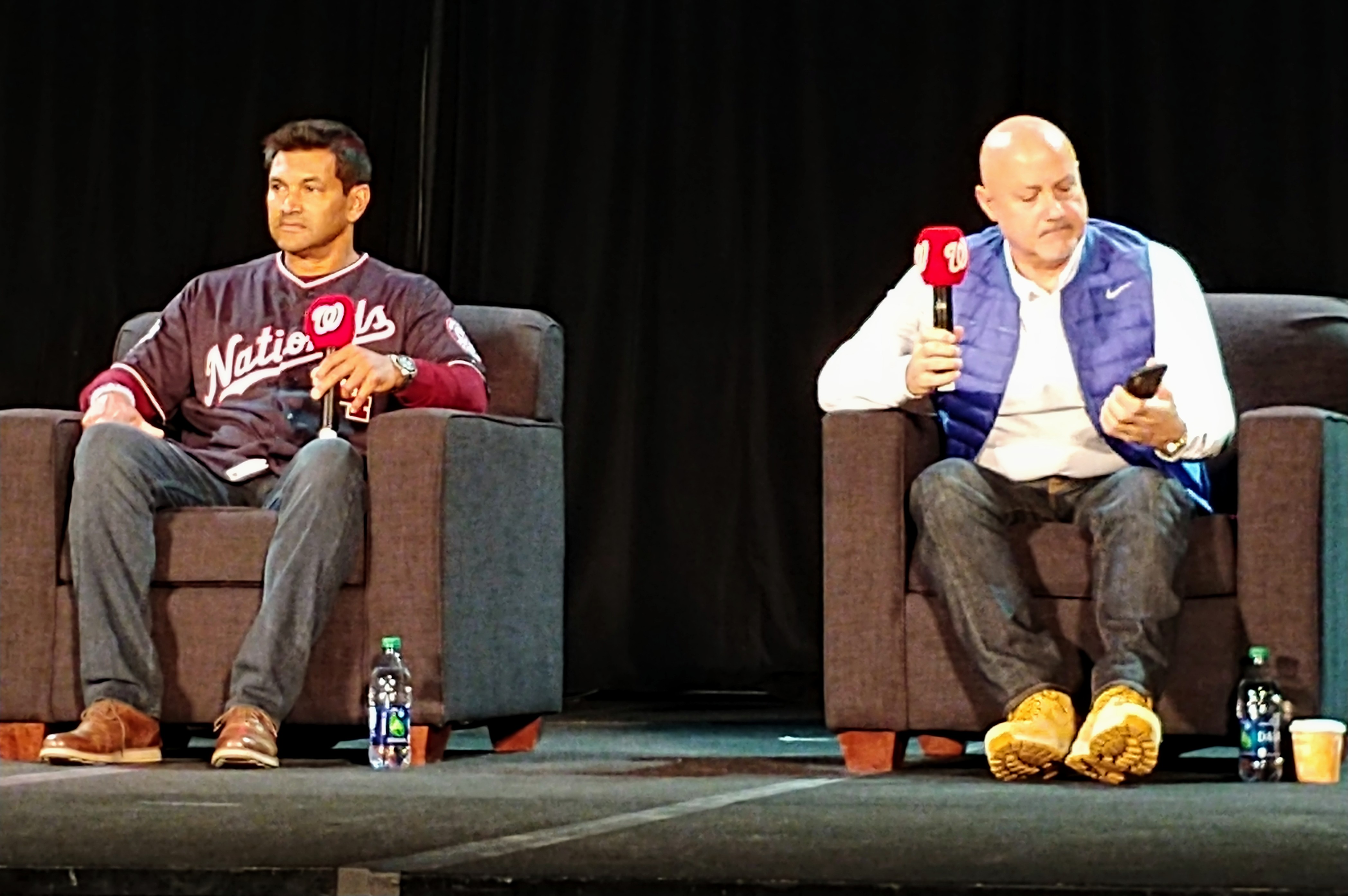 We will hopefully look back at the year 2020, and remember all of those blown games like yesterday as an opportunity that put the Washington Nationals in a position to draft players they would not have reached if they had their normal winning seasons like were the norm of the past nine years. It happens, and use the past as a learning experiences. The Los Viejos won you a World Series — But it is time to get Los Jovenes or at least get younger in 2021. General Manager Mike Rizzo is going to have to rip off the band-aid and move forward.

Yesterday Rizzo spoke to the media, and he did not want to discuss the future of Sean Doolittle when asked if he would return to the team next year. The Nationals will probably turn down every player’s team or mutual option, but it is certainly possible they would negotiate a deal like they did last offseason with Ryan Zimmerman when they declined his  2020 option of $18 million and subsequently signed him to a $2 million deal for the season plus a buyout of $1.5 million from the declined option. They did the same with Yan Gomes who re-signed for less.

The only team option expected to be picked up is on manager Dave Martinez who will get a chance to show that 2020 was an outlier for him. He built up a lot of currency when winning the World Series last year and deserves to return in 2021.

“We’ve been in conversations with [Davey Martinez’s] representation, and I feel optimistic that we will get something done,” Rizzo said. “It’s something that I want to happen, and I think Davey wants the same end-result.”

If there is one criticism of Davey’s managing in 2020, it was what we saw yesterday with Max Scherzer. It is knowing that Max is not Max of yesteryears. He will be 37 years old next July. That is ancient in baseball years. At pitches thrown after his 100th in a game the opponents are teeing off at a slash of .500/.591/1.111/1.702.

“We were watching [Max]. I know he had a lot of pitches, but he felt good,” Martinez said during his postgame. “With the extra day we had, we were trying to get him through that sixth inning. At that time, we only had three guys in our bullpen.”

The data is murky at pitches over 90+ for Max which would give a larger sample size. The fact is Max is still an excellent pitcher but his pitch efficiency is causing his pitch count to balloon causing him to not effectively go deep into most games.

“We’re here to win games,” Rizzo said. “That’s our goal — to win today’s game and to win as many games as we can. With that said, you’re going to see a steady diet of our young players and players we’re committing to for the long term. But with that said, we’re still trying to win baseball games. Each and every time out, we’re expecting to win and disappointed when we lose.”

The young players are here and on display and some have done very well like Juan Soto and Luis Garcia and others are struggling like Carter Kieboom and Victor Robles. Some players are not young but got a chance due to injuries like Kyle Finnegan and Kyle McGowin who have both impressed.

In fact, the bullpen has to be a strength for next year, and Roenis Elias and Sam Freeman are both under team control and could be back as the lefties to add to a bullpen which will most likely carry eight players with veterans Daniel Hudson and Will Harris as locks for next year. Add Tanner Rainey, Wander Suero and Finnegan to the back end of the bullpen and fill-in two more names from a large pool of righties like Ryne Harper, McGowin, James Bourque, Dakota Bacus, and most likely Austin Voth and Erick Fedde will compete as long-men and then add a lefty, and you will see there is limited space for the 2021 bullpen. That is actually good news for the first time in Nationals history to be in that spot.

We would expect Seth Romero to go back to progressing as a lefty starter as well as Ben Braymer and Wil Crowe who provide the near-term depth which has been lacking in the 2020 rotation when Stephen Strasburg was injured. Nobody stepped up with the opportunities given to grab a spot in the rotation including Fedde and Voth. This most likely will cause Mike Rizzo to sign a fourth starter to go with Strasburg, Scherzer, Patrick Corbin and Joe Ross. We would expect the team will part ways with Anibal Sanchez and possibly even Voth or Fedde who won’t have minor league options to be sent to the minors in 2021.

For the position players, the website The Nats Report stated “signing Trea Turner should be priority number one for the Nationals” in their assessment of the off-season goals. Turner is under team control for 2021 and 2022 only, and he will get MVP votes this year based on his strong season. We have projected a deal of seven years for $22 million a year as a number that would make sense. Rizzo did reach other to Turner’s agent at CAA in February to see if they could extend him. Both sides seem to want to get it done and with open payroll for 2021, the timing should be right to buy out Turner from his remaining two years of arbitration and add at least five years of free agency to that with some option years.

If you center around Turner, it would prioritize a Soto extension for the following year as he inches closer to free agency after the 2024 season. That is two of the starting eight position players and to fill-in the rest you would expect Starlin Castro to return healthy in 2021, and the team should consider relocating Castro to third base and keep the 20-year-old Luis Garcia at second base. Most likely the team will stick with the cost-controlled Victor Robles in centerfield, and Yan Gomes will return as one of the catchers. The future on Kieboom points to more seasoning in the minor, and we expect the team to part ways with Adam Eaton and Kurt Suzuki. Of course Eaton’s $10.5 million team option could be renegotiated, but his overall regression especially in defense points to him as a fourth outfielder.

All of that leaves holes at rightfield, first base, and either a primary catcher or a catcher behind Gomes to fill the main spots for this 2021 roster. The list of names that will fit have to be vetted by the budgetary constraints. That is the great unknown in a season that will have a CBT cap of $210 million and we project the Nats to be $39,450,270 under the cap without a long-term deal for Turner who we project would get $12 million in his third year of arbitration as a Super-Two player. If the team does not bring back Howie Kendrick and Zimmerman then the team will have what we project to be $47.7 million to spend on a fourth starter, rightfielder, primary first baseman, catcher, and building out a bench. If Turner is extended in a new deal for the long-term, take $10 million off the dollars to be spent. That does not leave a lot of money for all of the needs.

Even if the Nats budget allows Rizzo to spend to the cap, there will not be enough room to go after the biggest names in free agency. Just in the Nats Big-3 pitchers of Stras-Scherzer-Corbin, they have $86 million tied up in their base payroll plus bonuses and benefits which all have to be factored into the the CBT cap. TalkNats’ Don Henderson suggested doing an extension now for Scherzer who only has one-year remaining on his deal to free up some cap space. That is about it for creativity to allow for more spending if Scherzer took a large enough cut in pay to bring down his AAV from the current $28.7 million.

What would it cost to sign names like RHP Kevin Gausman, 1B Carlos Santana (bounceback candidate), RF Brad Miller and maybe for catcher the team could look at James McCann as a free agent from the White Sox. McCann ranks fifth in pitch framing according to factual numbers from Baseball Savant. He is also the fifth most valuable catcher per WAR rankings on Fangraphs. If MLB ever institutes robo umps, you won’t need pitch framers any more, but until then, you need catchers who thrive in all aspects of catcher’s defense while being able to provide some decent offense. The Nats rank last in catcher’s defense and that should be a priority for 2021.

Of course Nats fans are currently enamored with Marcell Ozuna and J.T. Realmuto who will be two of the biggest names projected on the market, but there does not seem to be the fiscal space to grab names like that. There is also Joc Pederson who would be a bounceback candidate like Santana.  A comprehensive list of free agent is available on this link from MLBTR.

The silver lining of a losing season is a good draft status to restock the farm with some top prospects. If commissioner Rob Manfred bases the draft on losing percentage, the Nats would chose fifth in each round if the season ended today. 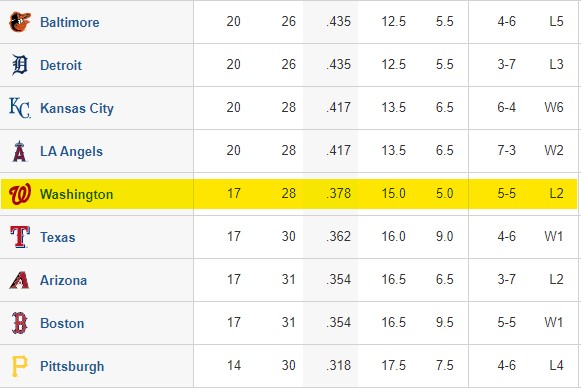