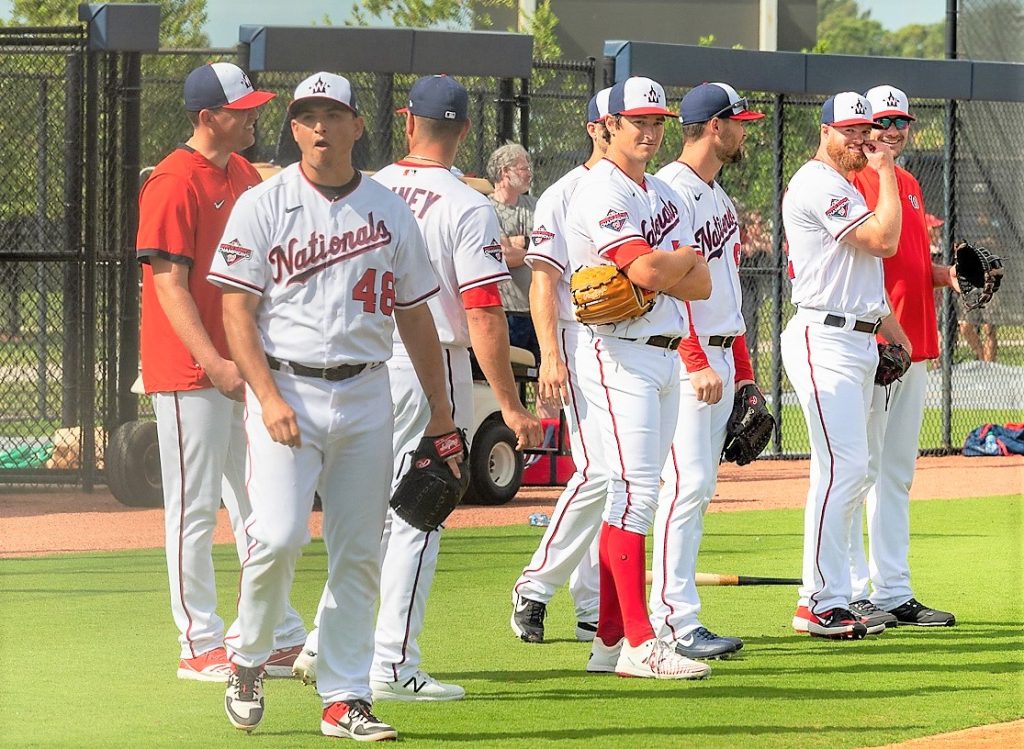 The bullpen is a lot lighter today; Photo by Craig Nedrow for TalkNats

A week ago we passed the first severance point on the 16th day of Spring Training, and general manager Mike Rizzo made no moves. Not one. Business as usual to the surprise of the many armchair GMs including myself. Sure, nobody expected that he would DFA arbitration players like Trea Turner, Joe Ross, Roenis Elias, and Michael A. Taylor. But what about Hunter Strickland, and Wilmer Difo who were thought to be prime candidates for a DFA. . For the Washington Nationals to make the move today with Strickland by DFA’ing him was like dumping $128,000 down the drain. What did you learn in the last seven days that you did not know before that about Strickland’s abilities as a relief pitcher? The price to cut Strickland a week ago was $256,640.08 if he was DFA’d, and now the goodbye check is $385,120.17. It seems that money could have been put to better use if I can speak up.

Why now with Strickland would be the question? Rizzo had until the end of camp to decide on Difo and Strickland and even Taylor and Elias. Why do it today? Was there another factor besides performance that prompted the move? Time might tell some answers, but today we only have what we can see. The hard throwing Strickland met the same fate as former fireballers who could not locate their pitches.

In all, eleven players were re-assigned from big league camp to the Minor League side with Jake Noll, Ben Braymer, Aaron Barrett, and Kyle McGowin all going to the Triple-A Fresno roster, and Jacob Wilson, Brandon Snyder, Taylor Gushue, JB Shuck, Dakota Bacus, Bryan Bonnell, and Wil Crowe were all assigned to Minor League camp. The other move was David Hernandez who was a non-roster invitee was cut and released.

Maybe some of those relievers deserved to stick around longer on that list. Bonnell in his short time made an impression, and so did Bacus and Crowe.

The following sort is done by WHIP which seems as good as any stat for a reliever in a small sample size:

Fortunately for Sean Doolittle, he is not being judged as harshly as Strickland. Doolittle has arguably been the worst reliever so far this spring in Nats camp. Not far ahead of him is David Hernandez who was just cut and in front of him is Daniel Hudson and Aaron Barrett. If Rizzo needed a 40-man spot, you would think Barrett’s tenure was in jeopardy. He has had little control on the mound, and his slider has little bite to it. He is fortunate that his outings were mostly against minor leaguers, and he still struggled to a 11.25 ERA. Barrett announced yesterday that his wife is pregnant with a baby boy. Congratulations to the Barretts.

So who makes the bullpen now? One long-man seems to give the inside track to Austin Voth. They could also keep Javy Guerra or Sam Freeman or Fernando Abad from the three veterans who are not on the 40-man roster and in camp on minor league deals. Wander Suero has had a great camp. We still have not seen Will Harris and the delay to the start of the season might assure him a spot unless he ends up on the 15-day IL. The rest of the spots seemingly will be Doolitte, Hudson, Tanner Rainey, and Roenis Elias.

That is ten players for eight slots. It looks like an NRI will make this roster for the bullpen unless Rizzo and manager Dave Martinez go with someone like James Bourque, Kyle Finnegan or Ryne Harper who are all on the 40-man roster.