The World Series champs could be heading to their offseason cities as the delay to the season changes plans! 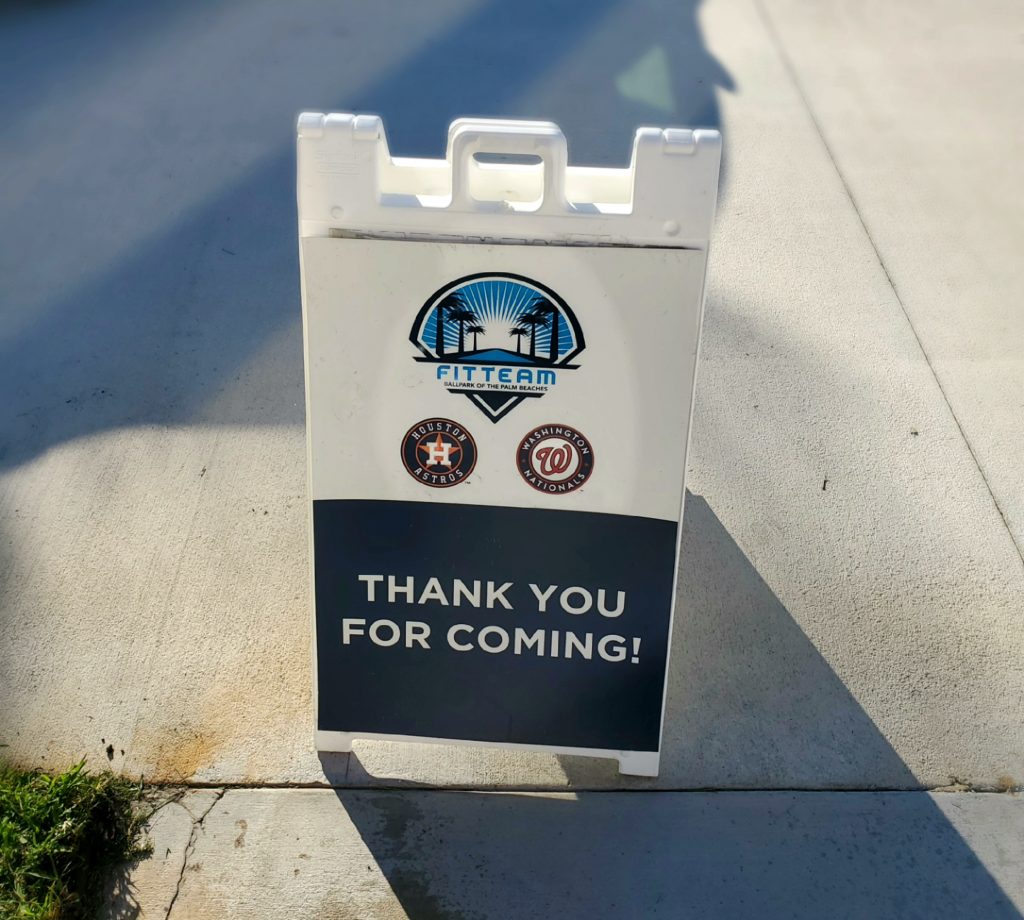 That sign (pictured above) was next to the Washington Nationals players’ walkway egress to the parking lot. It seems like the perfect “goodbye” to the players who make up the big league rosters due to the delay to the start of the season. Spring Training camps were immediately suspended formally after discussions between MLB and the player’s union could not agree to a new agreement. The Coronavirus will have rippling effects in all of our lives in the short-term, and everyone will need to adjust. Sure, some players might decide to stay near the Nationals complex in West Palm Beach like Patrick Corbin, Trea Turner, and Max Scherzer since they all have homes in the area. But most players’ homes are in other parts of the country, and in the case of Juan Soto, Wander Suero, and Victor Robles — their homes are in a different country. Yesterday marked the last “formal” day in the month of March for MLB players unless the sides agree to an amended short-term agreement.

The players were given three choices for the next couple of weeks and possibly beyond depending on when the real games are set to begin, and they can stay near the ballpark in Florida and have informal workouts and keep receiving their per diem allowances or they can go back to Washington, D.C. and use the facilities at Nationals Park or go wherever else they choose. 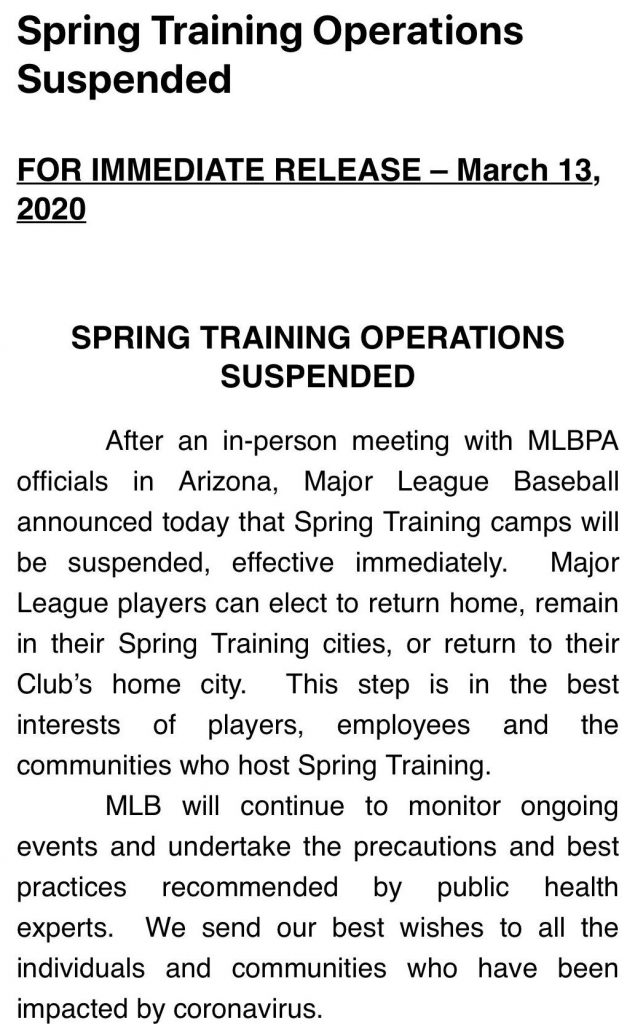 The issue is complicated by pay, safety, and the binding CBA (collective bargaining agreement) to just how much they can do as a team. Unless there are amendments done to the CBA, the teams cannot pressure players to stay near the Spring Training facilities. We will see what happens when the rubber meets the road.

Many Nats players are planning to stay in West Palm Beach. They’ll be meeting tomorrow at their complex to go over things, but feeling among many of them is that staying put and avoiding travel is actually safer than dispersing. They also want to keep preparing for the season.

Sure, there are no easy answers in these uncertain times, but all this comes a day after manager Dave Martinez rolled out “the plan” to the media which seemed to indicate the players were staying. Not all players can afford to re-up for extra time in Palm Beach County which is uncertain as the two week delay could grow longer. Those residences in Florida are not inexpensive for many of these players. But it goes beyond the dollars and cents — sometimes it is dollars and sense. Offseason homes could be where the kids are going to school and their families are, and if you are not guaranteed to make the team can you afford to stay on a per diem?

There is a mushrooming effect in place here. There are the seasonal workers as well as businesses that depend on baseball. Every day of delay has an exponential cost factor to so many. What could be a windfall for those bars and restaurants in the Spring Training towns is a drain in the neighborhoods in ballpark districts around the team’s permanent stadiums. How’s about those who were geared up for the Nats home opener on April 2nd. Well we know that is not happening.

We called Walter’s Sports Bar which is directly across the street from the outfield gates at Nationals Park, and they said they are staying open and the same for Mission Navy Yard. You can imagine the negative impact on their businesses if Opening Day is delayed for months — not weeks.

Then you have the casinos and sportsbooks. They have already taken in bets based on a 162 game season and now the odds will shift once the new schedule and strength of schedule is assessed. Their business depends on sports. Is anyone taking bets on beach volleyball?

Most sportsbooks have left their 2020 World Series futures up during the Coronavirus pandemic, and the Nationals World Series odds remain among the favorites, sitting between +1600 to +1800 depending on the site you check. A silver lining to the postponement of opening day is that Max Scherzer will have plenty of time to recover from the “right side” ailment that sidelined him during spring training. The same with others on all teams who have been nursing some pains in their bodies.

But most of all we have to look out for the little guy in all of this. The woman working in the team store, the guy grilling Nats Dogs at a concession stand, and the ushers and groundskeepers, and the security guards, and the turnstile staff. There are cleaners and seamstresses and the person who cooks the food in the Nats kitchen. Think about all of them. They probably don’t even coming to making 10 percent of making Juan Soto’s $629,400.

Davey Martinez says the #Nats‘ plan is to keep the team together in West Palm Beach and continue to work out. pic.twitter.com/muY38vFMXh

We should learn more in the coming days an weeks. Most of all they say it is about the safety of everyone, but it seems it also feeling a lot about the dollars and cents. For what it is worth, Jon Heyman reports the Yankees are staying together in Tampa.

With Yankees players all deciding to remain at their Tampa site, manager Aaron Boone and his staff have agreed to stay, as well. #TeamTogetherness

Maybe the Nats player leadership will follow the Yankees lead.