It starts with the little things; The Lerners prefer their random acts of kindness stay under the radar! 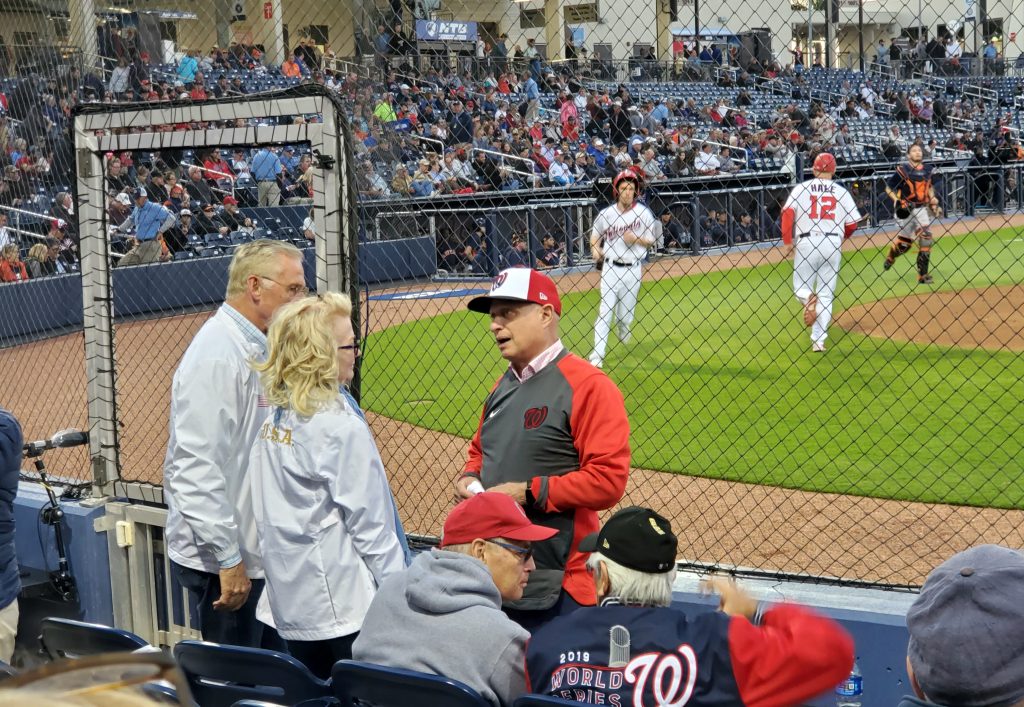 Baseball games will most likely be delayed months — not weeks according to numerous reports due to the Covid-19 virus. In regards to the Coronavirus and workers getting paid, MLB will not dictate to teams how to pay players who are not on the 40-man roster because they fall outside of the collective bargaining agreement (CBA). There are players  financially vulnerable who fall outside the 40-man roster and never received large amateur signing bonuses and were never on an MLB roster to share in some of those big paychecks. They are at the bottom of the food chain and were making below the minimum wage because they are covered by a different labor law. “Most minor leaguers make an estimated $7,500 for a year. Major league players average more than $4 million,” according to a report by NPR two years ago. The MLBPA will pay their player members on the 40-man rosters $1,100 per week through April 9th if they are returning home or to the team’s home city. They are doing other initiatives like this $1 million joint program between the MLB and MLBPA.

While the stadium workers must be paid at or above minimum wage, many of them fall into two categories. They either work directly for the team like ushers and groundskeepers or they work for the concessionaires which are major independent companies that run the food and beverage and t-shirt and memorabilia stands inside the stadiums. Companies like Aramark, Centerplate, Delaware North, Levy, PSC and Legends Hospitality are the behemoths in that space. At Nationals Park, they use Levy Restaurants to run their concessions, and in the FITTEAM Ballpark of the Palm Beaches, they use PSC (Professional Sports Catering) which was purchased by Levy in 2014.

Baseball owners have made their own side deals in the past during work stoppages, and at least for the FITTEAM staff, they only had less than two weeks remaining to work with the big league teams as Spring Training was wrapping up. Figure about 6 games for the Washington Nationals and 6 games for the Houston Astros when the games were cancelled. But for workers back in the stadiums in their home cities, the concessionaires were just in the midst of hiring when the shutdown was set by baseball commissioner Rob Manfred. We were contacted by a college student who snagged a job, and he said he was just hired two days prior. This is a nationwide problem as the Coronavirus is closing shopping malls, restaurants, movie theaters, casinos, wedding chapels, and stadiums.

What a source told us that the Lerners do not want to set precedences publicly as a large employer and generally like to act as individuals and do it anonymously and under the radar where they can. Each situation is different I was told. If you do it as an employer for one cause or person then you will be expected to do it for another and another and another. There was the case of assistant general manager Doug Harris and his bout with a rare cancer treatment (Car-T Therapy) that made the headlines. People wondered why the Lerners did not fund the whole thing themselves. As the source said, as an employer you have to be careful funding every issue not covered by medical insurance, but the source said Harris was assured the crowdfunding would be topped off one way or another and it was. Harris beat the cancer and kept his job and did help the Nationals to that World Series win. Mark Lerner himself is a cancer survivor who lost a leg in the process. Today, Harris is listed as general manager Mike Rizzo’s top lieutenant — Assistant General Manager & Vice President, Player Personnel.

Sometimes it is just the little things. I got to sit behind Mark Lerner for a few games at this abbreviated Spring Training. I never bothered him at his seat, but I snapped some photos occasionally as I saw him interact with people. You could tell some of the people he did not know as I could hear introductions. He was as kind as one could expect and maybe kinder. 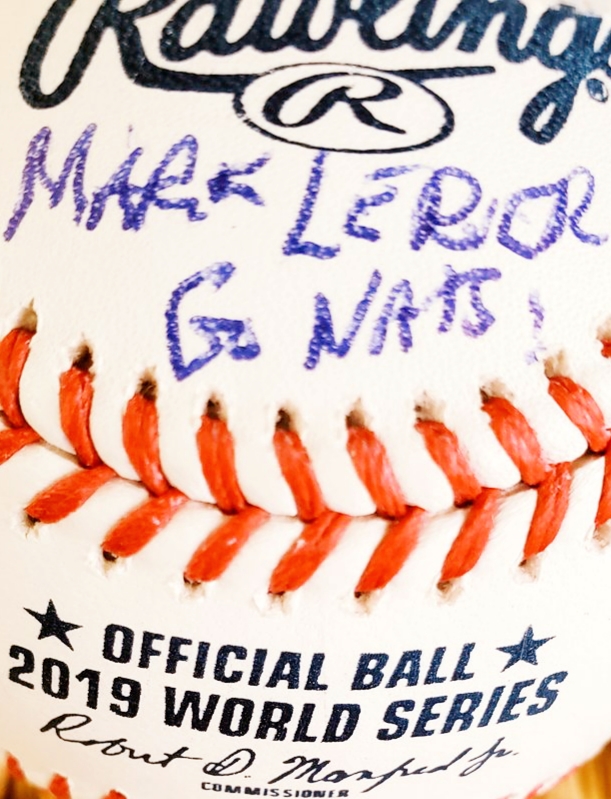 Before games on the concourse he would take photos, and that is when I asked him to autograph my World Series baseball. He signed it in block letters. I’m not sure why, but I appreciated that he took his time to do it. We chatted for a few minutes before he was approached by other fans.  He seemed to be so happy each day I saw him.

Reader Lynn G. shared her concourse encounter with Mark Lerner that seems to be the way Lerner is and would probably be embarrassed that we are sharing this story.

“I introduced myself to Mark Lerner in the mezzanine before the game,” Lynn G. said. “He came over to my friend and I and shook our hands and talked with us for a few minutes. A friend of hers was at the game with her elderly dad. Mr. Lerner asked her dad how he liked the experience at [FITTEAM Ballpark] and her dad said he forgot his chapstick and couldn’t find any in the stores.”

Yes, it was warm and a full sun for many of those games and chapstick and sunscreen were difficult to find on the concourse.

“… Later someone came to their seats with a brand new chapstick for her dad,” Lynn G. continued. “At the next game I saw Mr. Lerner giving a personal tour to someone. When they came around to the bullpen where I was taking pictures before the game, I said ‘hello’. He remembered me from the day before. I think he makes a really good effort to interact with the fans.”

I know for a fact that these types of encounters with fans have happened since the Lerners took over the team, but you never read many good things about them. Usually only the sordid details of negativity make it into the papers because it is a proven fact that you get more clicks from negative writing than positive writing. Who wants to read this? In these tough times, know that the Lerners go above and beyond and want to stay anonymous and not tell you what they do for workers, fans, or a stranger on the street. It starts with the little things.