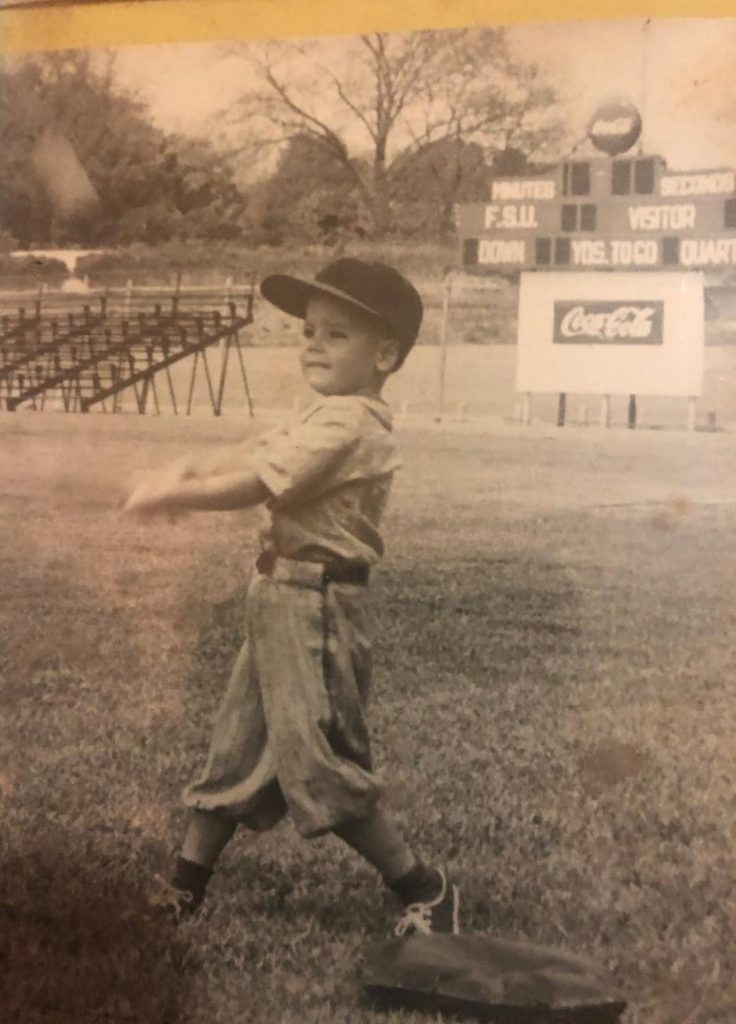 Photo provided by Mike Toomey in his baseball scrapbook

They call him coach now. This man has spent his entire adult life of over 50 years in baseball and at the end of his working days is giving back to his community while coaching high school ball at the ripe age of 69.

Caring,
One of a Kind,
Always inspiring,
Charismatic and
Humble

For those who have been involved in baseball in the DC area since the 1960s, you might have crossed paths with a baseball lifer like Mike Toomey. He epitomizes the way our American Pastime should be viewed both on and off the field. He has been a successful player (George Washington University), coach at both the collegiate (GW) and pro level (Alexandria Dukes) and a Hall of Fame scout who earned a World Series ring. However, what the baseball purists would miss about this baseball treasure is his undying love, loyalty and devotion to this amazing game!

To get a better understanding of where Mike’s passion for the game comes from, we go back to the beginning. Toomey was born in Sayre, Pennsylvania in 1951 to Frank and Rita Toomey. His father served in the Marines during WWII. His mother served in the U.S. Cadet Nurse Corps. Mike had two very loving, devoted and disciplined parents. Frank, his father, was a baseball man and took an assistant coaching job under Tom Nugent at Florida State from 1954-1958. The family moved to Hyattsville, Maryland in 1959 when Frank followed Coach Nugent to the University of Maryland to coach the Terps.

The elder Toomey also had a brief stint in pro ball with the Philadelphia Phillies organization and was a part-time scout for the Kansas City Royals and San Francisco Giants. I guess you could say “like father like son.” Mike said that “Baseball was always my father’s favorite sport!” As a coach’s son, you quickly realize that you get to see many top athletes in football and baseball after school and on the weekends. Mike was about eight years old when he started to develop an eye for scouting talent as well as developing his own skills as a baseball player.

When Mike played baseball as a youth with aspirations of being a big leaguer, it came time for high school. He was prepared to go to DeMatha High School which was in walking distance from his home. However, his father had other plans for him with regards to playing baseball in school. Mike ended up taking a bus to and from St. John’s College High School each day from 1966-1969, and maybe it was because St. John’s was considered the better baseball program. At St. John’s, Mike starred as both a center fielder and pitcher. Another change came in Mike’s senior year and he transfered to Bullis Prep in Potomac, Maryland in 1970 to improve his math and statistics skills.

From there, he also starred at Montgomery College for two years before transferring to George Washington University in 1973. He was the MVP for the Colonials in 1974. He also received his Physical Education degree in 1974. In 1975,  Mike was hired as the head baseball coach at GW. While there, he took GW to 3 straight NCAA post-season appearances. The 1979 squad had a record of 38-15 and is still the only Colonial club to record an NCAA win with a 5-2 victory over Seton Hall in the Florida regional’s in Tallahassee.

Mike tells of how the team succeeded despite playing its home games on the Ellipse in the shadow of the White House, which meant dodging tourists and a steam gate that was in play down the first base line. In fact, many of the infielders wore catchers masks during practice because the playing surface was some bumpy.

Mike believes that he may be the only college baseball coach to ever be ticketed by a policeman during a game.

“I was coaching third base when a D.C. policeman walks over to me and hands me a $150 ticket for a foul ball that broke a car windshield,” Toomey said.

In 1980, Mike got his first professional coaching job with the Pittsburgh Pirates affiliate, the Alexandria Dukes of the Carolina League. It is there that he coached former Chicago Cubs manager Mike Quade.

The Washington Times wrote that Toomey met up with Jim Riggleman at a game. The two were baseball stars from the DC area and did some substitute teaching together in the early 1980s.

In 1982, he got his first scouting job working for the legendary Bob Fontaine, Sr. in the San Francisco Giants organization. Mike’s territory covered six states (Kentucky, Virginia, West Virginia, Maryland, Washington, DC, Delaware and Pennsylvania). In contrast, today’s scouts usually have two states. Mike’s first significant signing was Kirt Manwaring, a catcher out of Coastal Carolina. Other notable pro’s that Mike signed include (in no specific order) Mike Venafro (JMU), who he signed on the hood of a car for $2,000 for the Texas Rangers, Ryan Glynn (VMI), Larry Carter, Jim McNamara, Corey Lee, Jamie Brewington (VCU), and Greg Ritchie (GWU) who is currently the head coach of the Colonials.

“Yes, he scouted me and called me almost weekly my entire career,” former Nats pitcher Mike O’Connor told us. O’Connor pitched collegiately for GW and was drafted by the Montreal Expos in the 7th round of the 2002 MLB Draft. “Helped me more than anyone else in my entire pro career.”

Toomey’s scouting talent put him on the international track in Japan, South Korea, Canada, Italy, Puerto Rico, Dominican Republic, Venezuela and Columbia. He has created “The Columbian Baseball Foundation” to help underprivileged children learn and play baseball. He travels to Columbia in South America once or twice a year.

In 2006, Mike was appointed special assistant to the General Manager of the Kansas City Royals Dayton Moore. His ability in evaluating and signing talent, as well as his ability to pick up on opponents tendencies played a huge part in the Royals winning the World Series in 2015. Maybe it was his work in evaluating two youngsters in the Brewers organization who were the key for the Royals that really showed his impact as a scout. It was Toomey who suggested acquiring outfielder Lorenzo Cain and shortstop Alcides Escobar from the Milwaukee Brewers. Eventually they were acquired in a trade for Zack Greinke, and Cain and Escobar were key parts of the Royals two World Series including winning it all against the Mets in 2015.

““Those are two kids that I recommended we get,” Toomey said. “They played an integral part of our team those years. We were right there celebrating with the players in the clubhouse after the [World Series win]. It was a tremendous thrill to win a World Series. An experience I’ll never forget.”

Yep, he has a beautiful World Series ring, and he went out a winner and retired after that from professional baseball in 2016 after 38 years at 65 years old. The miles and long hours and all of the traveling needed to end. He won many awards on his incredible journey that include being inducted into the GW Hall of Fame, The Mid-Atlantic Major League Hall of Fame, he was the “Major League Scout of the year in 1992” and in May of 2019 was inducted to the illustrious “Professional Baseball Scouts Hall of Fame”.

Mike currently lives in Gaithersburg, Maryland where he can still be found coaching baseball players of all ages.

“I enjoy teaching and working with youngsters more than I did scouting,” Toomey said. “I think you have more of a chance to change a person’s life, to have an impact every day.”

The kid who grew up in D.C. and watched the Washington Senators and worked for the hometown Washington Nationals and has friends throughout the organization got to cheer them on in the 2019 World Series. He is now an assistant coach at Dematha High School in Hyattsville near his childhood home — a few blocks where it all began along Route 1.