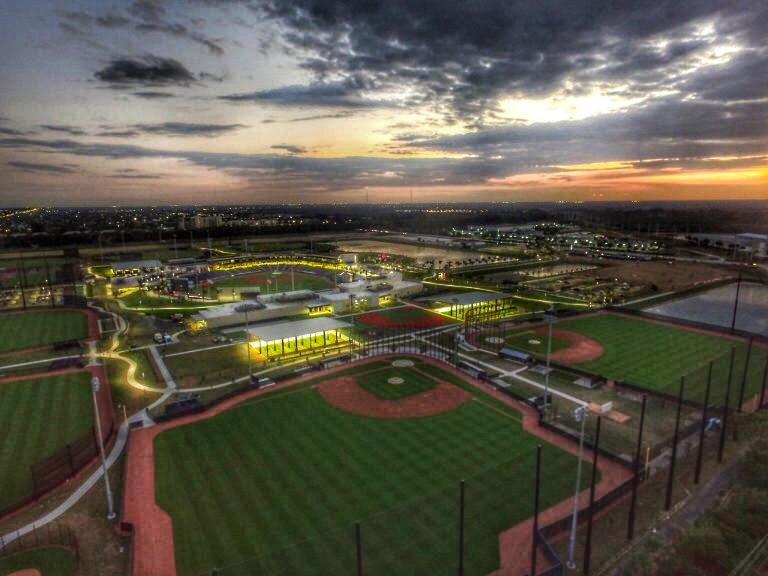 All quiet at the FITTEAM Ballpark of the Palm Beaches, Photo by Sol Tucker for TalkNats

“The show must go on,” will not even hold true on Broadway which has gone dark. More baseball players are shutting it down as reality spreads that this is going to be a very protracted shutdown and a second offseason. The two week delay initially announced for the start of the baseball season looks to be months away at a minimum due to the Covid-19 virus. Now several NBA players have tested positive for the Coronavirus prompting some to believe that contact while sweating and open pores makes it easier to transmit the virus. Athletes in minimal contact sports like basketball, hockey, soccer and lacrosse are probably at a higher risk of passing the virus even though their athletes would be in the category of highest survival rates if infected because of their age and previous health history. Baseball has minimal player-to-player contact on the field of play, but the dugout and bullpen is in close quarters and goes against the new “social distancing” suggested mandates.

We are in a second offseason, and this one will have little to no action. No trades, no free agent signings, no record shattering extensions, and no Scott Boras pressers. Players will go back into their November shutdown routine, but this time with no football on Sundays and no autumnal leaves falling off of the trees. It is quite possible that there will not be a return of baseball this year. Maybe our highlight will be the annual amateur baseball draft on June 10th-12th — but maybe not. The Nationals, by the way, will pick 22nd if there is a draft.

“I think it’s just too early to tell,” Lacy Lusk of Baseball America told us regarding the draft. “If minor league teams are playing by Draft Day, then June 10 should work fine. If scouts still aren’t scouting, then postponing it makes the most sense to me.”

The issues with postponing the draft is there are several High School showcases and collegiate games that scouts travel to after the draft like the high school showcases for 2021 seniors by Perfect Game at Tropicana Field on June 17-21. That is the first major high school showcase post-draft, and then there are amateur tournaments, including USA Baseball’s PDP League, USA Baseball’s Collegiate National Team, various college summer leagues and the Cape Cod League.

If baseball is not played at all, what will happen to players’ service time and free agent deals. Will Max Scherzer be a free agent after the 2021 season or will it extend to 2022? That is a key because do the Nats really want to pay a 38-year-old a $30 million contract? The stakes are potentially enormous here for teams and players. This is uncharted territory here. If the 2020 season is played, it is a moot point except for the service time issue for young players like a Juan Soto. There will certainly be some contentious debates between the MLB and the MLBPA on all of these issues. When it comes to money, the sides rarely agree even though they are putting on the face of charity right now.

“Hopefully we can reach an agreement that will give a lot of people clarity as to how we’re going to proceed going forward,” MLB commissioner Rob Manfred said and also agreed that each team owner will set aside $1 million for stadium workers, but no announcement on a new date to restart baseball. “We’re not going to announce an alternate Opening Day at this point. We’re going to have to see how things develop. I think the commitment of the Clubs is to play as many baseball games in 2020 as we can, consistent with the safety of our players and our fans.”

During conference calls with all thirty baseball owners, Manfred discussed the status of ongoing operations at each of their Spring Training facilities and said there should be “no organized activities” at those complexes.

“We did agree with the MLBPA that Spring Training sites would remain open, but the thought there is with a skeleton crew, really to give players someplace to use a gym as opposed to being forced out into a public gym,” Manfred said. “We’re really encouraging players to make a decision as to where they want to be over an extended period of time and get to that location as soon as possible. We’re providing detailed social distancing recommendations in the context of baseball operations to the Clubs today.”

If the World Series is not played in 2020, the Washington Nationals will stay the champs into 2021. The last time that happened in baseball was in the strike year of 1994 when the Toronto Blue Jays were the 1992 and 1993 champs and kept the title into 1995 when they were eliminated early during that season. The last team with more days as the World Series champs were the 1998-2001 Yankees who were stripped of their crown in the seventh game of the 2001 World Series by the Arizona Diamondbacks.