Should an upgrade at Catcher be a Rizzo Priority? #Nats

There has been quite a bit of discussion lately regarding whether the Nationals need to go out and get a catcher to replace Wilson Ramos.

Lets start with his defense by looking at the standard catcher metrics. 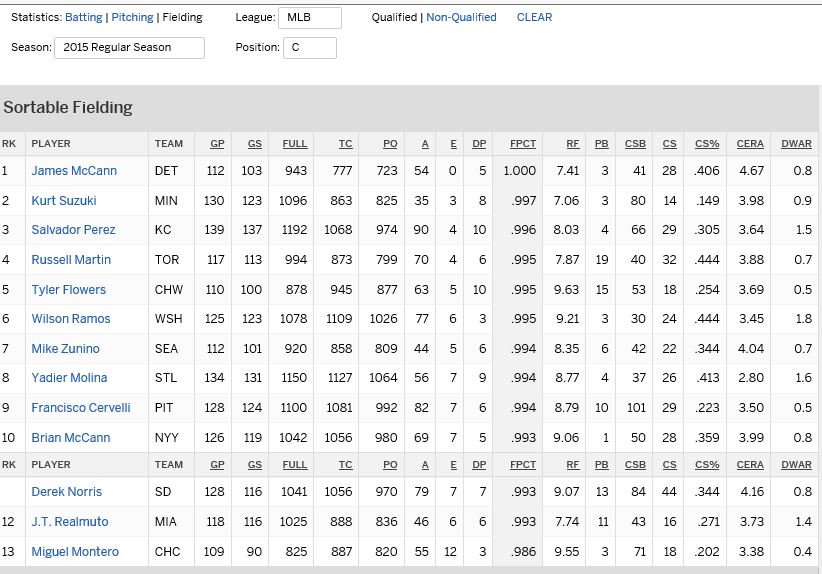 These numbers seem to suggest that Wilson is a very good defensive catcher – which is perhaps why he was one of the finalists for the Gold Glove. Neither Posey, nor Molina, rank better than Wilson in many/any of these categories.

Disclaimer: These numbers are for catchers who played in enough games who qualified. For some reason Posey shows up in some of the sorts, but not all of them. You can click on the image to go the ESPN site to look for yourself to include all catchers.

So now lets look at missed throws from the outfield. Unfortunately, that information does not seem to be available (at least I could not find it). And it is not available in the Game Day data either. For example consider this play that Deuces highlighted which the announcers felt was a great throw, but tough to catch given the shot hop. Here is how the play was recorded in the Game Day data:

So that got me thinking about surrogate measures to see how bad/good Ramos is on throws from the outfield. Doing that meant having to come up with some surrogate measures, e.g., counts for events that might be related to dropped throws.

The table at right contains counts of how many outs were recorded by the catcher based on throws from the outfield. There were 75 catchers who were involved in such plays in 2015. The table has three data columns:

Of the 75 catchers, only those with 3 or more outs based on direct throws from the outfield are included in this table.

And note that the table is ordered by the number of direct throws from the outfield to the catcher.

For the curious here are the descriptions from the Game Day data from Ramos’ 6 outfield throws that resulted in outs :

So I next looked at runs scored via Sacrifice Flies thinking that if a disproportionate number of runs were scored against them by sacrifice flies, perhaps the issue is the catcher not being able to receive the throw (and, yes, there are lots of other possible reasons). So here is the data for all 30 teams. And these results don’t seem to suggest the Nationals have a problem with allowing too many runs via sacrifice flies. They are top 10 (i.e., a smaller number)  in number of runs via Sacrifice Fly’s and Total Runs. And middle of the road in terms of the percent of runs allows via Sacrifice Fly’s.

Admittedly, these surrogates are far from perfect. Please use the comments section to discuss other ideas for surrogate measures on dropped throws by the catcher. I will gladly report back on any such ideas that can be calculated/determined from the Game Day data.

Before concluding the issue of defense, consider the following observations by fellow author Ray (yes, we do sometimes collaborate on posts before they go live):

The Buster Posey Rule changed the play at Home so drastically that now the catcher has to basically plant in one spot in fair ground. There have been two drastic effects. One is that the catcher is less likely to use his feet to adjust to the ball. The other is that THE way to get home safely is to head-first the slide in foul ground. Machado did it brilliantly in one of the games here late in the season. BUT, that opens the door to many more shoulder/face/wrist injuries. That’s what got RZ late in the year. It put Dee Gordon out of the lineup for a while. It’s terrible. I’m willing to bet that catchers did better on these throws before the Posey Rule.

And someone needs to tell Willie to throw the mask away so he can see the ball on that short hop. He stands there with his mask on. My old American Legion coach would have burned my butt for that.

And now Andrew’s (AKA Allstars) thoughts on this:

The Buster Posey Rule has changed Posey. He is very hesitant getting near a slide. The problem is the throws don’t come into the same spot each time and the catcher has to get the throw then get into position to make a tag.

Ramos is fine when you consider every catcher in the league has their issues. Can he get better? Yes.

Let’s now consider Ramos’ offense production. But first let us remember that catcher is primarily a defensive position. So the trade-off between offense and defense is important. Every fan would live a catcher who is a Gold Glove and Silver Slugger caliber player. But such players are few and far between.

Some folks have commented that perhaps the issue with Ramos’ performance at the plate was fatigue. As Andrew pointed out when he reviewed this before publishing it:

Clearly there was a problem with his batting. So much of batting comes from the legs and you can see how well he started off the season and then was called on to play the bulk of the games and in fact on May 19th he was slashing .311/ .333/ .410/ .743 and looked like an All Star. It was straight down from there.

And Ramos’ splits would seem to support that. His performance was worse in each month as the season wore on, except for a slight improvement for a stretch in August.

And what post by me about these numbers could be complete without my statement regarding 1 more hit: One more hit every 6th game, and Wilson is batting around .270. 😉

So before I close permit me to challenge those fans who don’t agree, to look at plays that could have involved a dropped throw by Ramos. I will be glad to produce a listing of .the dates and the inning for the 37 runs scored via sacrifice flies, along with a link to the MLB web-site with the condensed games for each date. You can then review for yourself and report back to us. 😈

This entry was posted in Lobaton, Ramos, RizzoForADay. Bookmark the permalink.
← Previous Article | Next Article →