The inaugural draft lottery with Nats hopes the ball bounces their way! 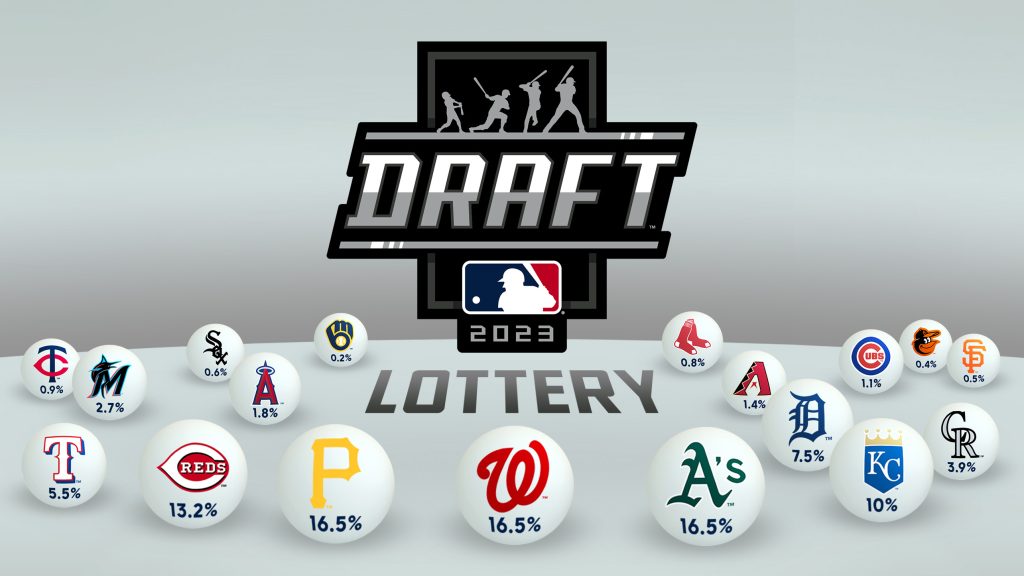 The Collective Bargaining Agreement (CBA) of 2022 changed so many aspects on the future of baseball, and it ended nearly six decades of having the team with the worst record from receiving a guarantee to pick first in the MLB draft. The old draft format began in 1965, and the Washington Senators chose third and picked pitcher Joe Coleman in that draft. Now it is a draft lottery system that will determine the first six spots in the future drafts, and tonight’s the night to find out where the Washington Nationals will pick at the top of the draft.

The draft lottery program is televised exclusively on MLB Network during a half-hour production starting at 8:30 p.m. ET/5:30 p.m. PT  with Greg Amsinger, Dan O’Dowd and Harold Reynolds at the Winter Meetings in San Diego. We will see how this all shakes out as the logo’d ping pong balls will determine which teams get those coveted picks at the top of the draft.

The lottery draft was put in place to eliminate the deep tanking we had seen for years in baseball. No team is guaranteed that first pick — and the Nats odds are 16.5 percent to grab that top pick. The last time the Nats picked first in a draft they got Bryce Harper in 2010.

The teams with the three worst records in 2022 — the Nationals, A’s and Pirates, will all share those best odds (16.5 percent each) of getting the No. 1 overall pick via the lottery, although all 18 non-playoff teams will have varying odds at the top picks. The other teams will have declining percentages in reverse order of their records, down to 0.23 percent for the non-playoff club with the highest winning percentage which is the Brewers.

The Tankathon site has put together a table that will give you the odds of those first six picks and beyond. Here are the odds for the No. 1 pick in the draft:

There will surely be some happy fanbases and some that won’t be as happy after the actual lottery as you would expect some movement on this chart.

Here is tape on Crews as they discuss what makes Crews an elite prospect:

Of course this could be the year to go with the top pitcher in the draft. Dollander is looking like a rare gem at the top of the draft. He has a power slider/fastball combo that is the best in college baseball. Sure, we would like to know that he can develop a killer changeup to put him to the point where Stephen Strasburg was when he was the 1-of-1 in 2009. Stras had the blazing fastball, the great hook, and that changeup that dropped off the table.

These names on Baseball America’s list will move a lot. Last year at this time was Druw Jones as the presumptive No. 1 pick, and by June of 2022 it was Jackson Holliday who moved up to the top of the list. These lists will be fun to look back at in April to July of next year. For now, it is the focus on free agency for the Washington Nationals and the 2023 draft.

This entry was posted in Draft. Bookmark the permalink.
← Previous Article | Next Article →