The gut punch that many expected — happened and Rizzo/Martinez speak at the Winter Meetings, and tonight is the Draft Lottery! 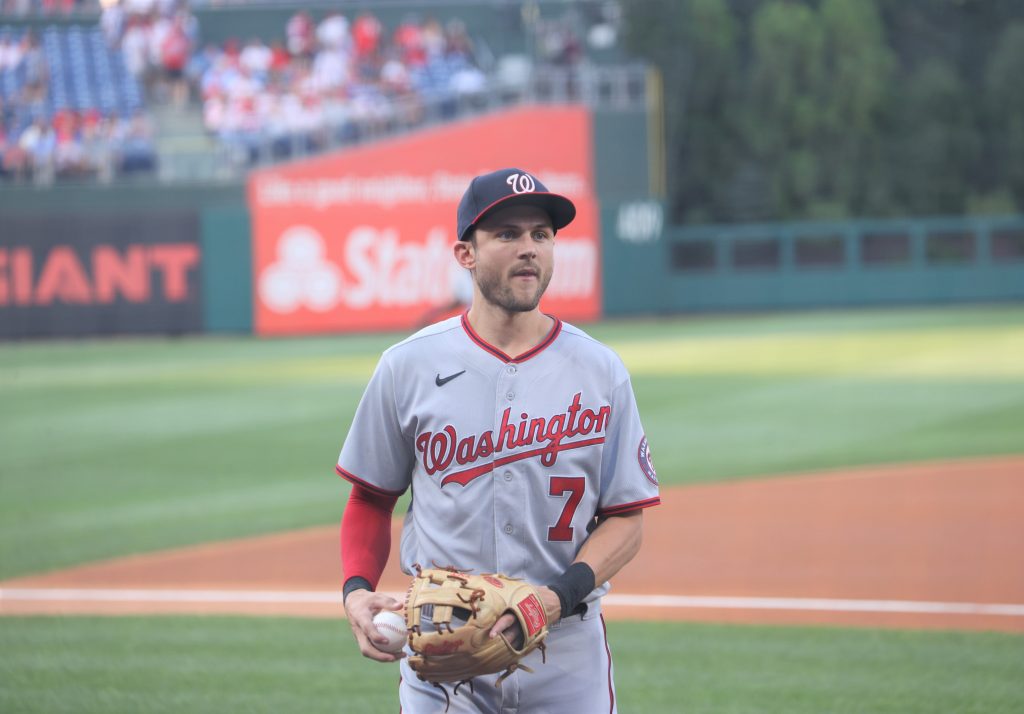 PHILADELPHIA, PA — This will now be Trea Turner‘s home field for a long time (Photo by Sol Tucker for TalkNats)

Let’s just get it out of the way. Turner was rumored for months to be a player that the Phillies wanted, and clearly the former Nats’ All-Star shortstop wanted them. It is just another gut punch to Nats’ fans in a series of shots to the solar plexus that has had many gasping for air. While we have seen the other NL East teams ascend, the Nationals have been on a downward spiral in the three years since winning the 2019 World Series.

But why did Turner sign for such a low AAV? We were assured by some, that there was extreme salary inflation, and Turner would get over $35 million a year. I guess this goes to the same people who said that offering Juan Soto $29.33 million a year in the largest contract in the history of baseball at $440 million was an insult to Soto because the AAV was too low (yes, I am shaking my head). Long-term deals often have lower AAVs. The last four seasons combined, Turner has been the second most valuable position player by FanGraphs WAR with Soto at sixth and Lindor at eighth. Nats’ general manager Mike Rizzo said he was happy for Trea. Rizzo said a lot more yesterday at the Winter Meetings in San Diego, California.

Tonight is the Draft Lottery program that will be aired exclusively on MLB Network during a half-hour production starting at 8:30 p.m. ET/5:30 p.m. PT with Greg Amsinger, Dan O’Dowd and Harold Reynolds at the Winter Meetings in San Diego. We will see how this all shakes out as the logo’d ping pong balls will determine which teams get those coveted picks at the top of the draft. Truthfully, this will probably be the biggest singular impactful event for the Nats if they get the first or second pick in the draft. Their fate is in the luck of the ping pong balls.

The lottery draft was put in place to eliminate the deep tanking we had seen for years in baseball. Unfortunately for the Washington Nationals, they are not guaranteed that first pick — but their odds are 16.5 percent to grab that top pick tonight. The last time the Nats picked first in a draft they got Bryce Harper in 2010.

The teams with the three worst records in 2022 — the Nationals, A’s and Pirates, will all share those best odds (16.5 percent each) of getting the No. 1 overall pick via the lottery, although all 18 non-playoff teams will have varying odds at the top picks. The other teams will have declining percentages in reverse order of their records, down to 0.23 percent for the non-playoff club with the highest winning percentage which is the Brewers.

Back to what happened yesterday when Rizzo told reporters Monday night a few new tidbits, and a lot of points he has been saying for the past two months.

“Yeah, we’ve got payroll clarity, and we’re marching ahead with our blueprint and our plan for this offseason,” Rizzo said and that was the new news. “And I think that we’ve got scheduled a lot of things that we’re trying to get done here, and hopefully we can do something here, or shortly thereafter, to improve our club.”

Okay, we have payroll clarity! Woohoo! But we have no idea what the number is and if Rizzo could even spend what he has. Rizzo will have to convince the better players to sign with the Nats and that is no easy task.

By the way, the Nats have the guaranteed first pick in the Rule-5 draft that will wrap up these Winter Meetings in San Diego and a source told us that Rizzo will make at least one acquisition but has not finalized the player he will take.

“Rule 5 draft and the free agent market and the trade market, all the things that make these winter meetings so special,” Rizzo said.

“Still we think starting pitching is something that we’re looking for and possibly another offensive player would be great. Since then we have added a couple of offensive players on the roster, so we’re looking forward to see what they could do for us, and we think that — we’re certainly not finished because of the two additions we made (Jeimer Candelario and Stone Garrett), but we’re comfortable that those two guys should help us.”

The Nats go into Spring Training with Patrick Corbin, Josiah Gray,  MacKenzie Gore, and Cade Cavalli as candidates for the Opening Day starting rotation. Certainly you need five names there and Gore and Cavalli both finished the 2022 season on the 15-day IL.

“I think that going into the season — we had seven starting pitchers from our 40-man roster on the [Injured List] at one time, so that’s pretty destructive for anybody’s roster, it certainly didn’t help us,” Rizzo said. “You never have enough [pitching] depth. We are looking to upgrade the starting pitching most prominently. Durability is a key issue, both in position players and in pitching. We want the best player [in free agency] that gives us the best impact, and that could be logging the most innings, performing the best, track record, veteran presence — there’s a lot of things that go into the decision, on who to target and who to go after.”

As always, getting those players in free agency is more than about the money. You have to sell players on the Nats and right now — that’s a last place team with a team that is for sale.

Rizzo also gave a Stephen Strasburg update that he is not doing anything off the mound yet, but he’s progressing to get it to that point according to Rizzo. Counting on Strasburg is risky. Better to not pencil him in and be pleasantly surprised. Rizzo also spoke about non-tendering Erick Fedde and Luke Voit.

“[Fedde] was a first round pick that pitched for us for six seasons, was on our championship club,” Rizzo said. “He was one of the 17 homegrown players on the 2019 club, so we think that he was a good big league player for us, he was a good National, and we just felt that non-tendering was the right thing to do for the organization, and something that — we wish him the best, but we think that we’re going to move forward without him.”

“We all have payrolls and budgets that we have to adhere to, and we felt that non-tendering him was the right place to — to put our money in a different place,” Rizzo said, “… and we felt that Luke was a good teammate for us and had some success, but we felt that we could — we’re going to allocate those dollars differently.”

Rizzo talked about the old days of the previous rebuild and looking forward.

“When we started this thing back in 2009, we won 98 games in 2012 with a very low payroll, and continued to [raise the payroll] north, so we’re fully-capable of doing this again. …We’ve done it before, we know what the blueprint is all about. We know how to do it.

“We thought we were better than [the 55-107 record] coming out of Spring Training. We’re judged by wins and losses at the big league level, and that’s always the criteria that we’re cognizant of, and we want to win.

“We’re tired of the rebuild term — reboot term, whatever we’ve called it. The important part is for our young players to progress and to get better, and if they do progress, and get better, it puts us on the right road and it wins us more games.

“So I think that if the question is are we expecting to win more games this year than we did last year, by all means we are.”

Nats manager Dave Martinez gave a few interviews yesterday on TV, radio, and to the media. He took the helm for the Nats back in 2018 and the 2023 will be his sixth season as the Nats manager.

Martinez has not been shy to talk about what he needs to improve his team for 2023. Davey has a way to stay positive even when things look bleak.

“Look, as you know we’ve got some starters already in our rotation,” Martinez said. “But we don’t feel like we have enough. As the season goes along, things happen. We do need — especially if we can get another veteran starter, it will be great — one or two.

“I talked to [Rizzo] about it, and as you guys know, I truly believe in starting pitching. That’s what we’re looking to do right now.

“We need guys to go a little deeper in games. Our bullpen, I think, was a big strength of ours last year, but I can’t do that to them this year where they cover so many innings.”

With the team looking for a left-handed impact bat who could play left field, it almost points to Michael Conforto without them mentioning a name. Candelario will start somewhere and you figure he would be at third base or first base. Joey Meneses as we know can play first base or could play left field. Carter Kieboom and Jake Alu will both get a shot in Spring Training. With positional flexibility for both Candelario and Meneses, it will help in making acquisition(s).

“I think we have enough moving parts, we could do different things,” Martinez said. “I’d like a guy that could be versatile, if possible. So we’ll see. We’re kind of weighing all the options of what we want to do.”

These next few days will shape the future of the Washington Nationals starting with the Draft Lottery tonight, and if Rizzo acquires any new free agent players for the long-term, and we will see which player he chooses in Rule-5.