The Winter Meetings wrap-up today, and Nats have the Rule-5 draft and other unfinished business! 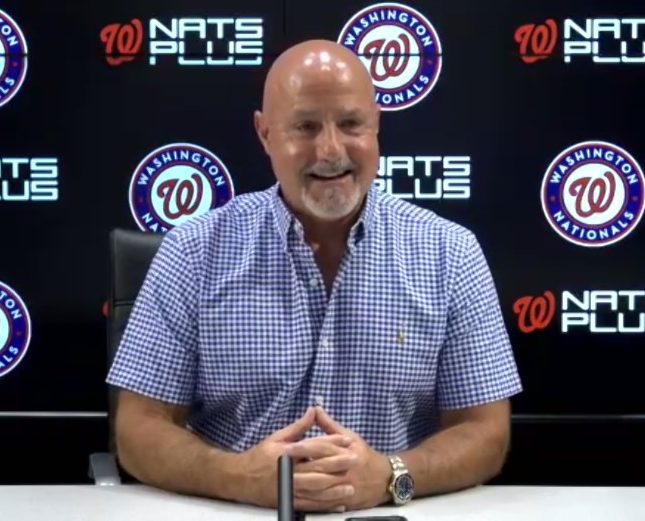 The Winter Meetings wrap-up today in San Diego with the Rule-5 draft as the finale to the 3-day event.  The Washington Nationals choose first in this Rule-5 draft at 5 p.m. ET/2 PT (Live audio stream on MLB.com). Sources have told us that general manager Mike Rizzo will choose a player, and that player is RHP Thad Ward. Last night was the inaugural Draft Lottery, and the Nats secured the second pick in the draft which should yield a top prospect for the future of the team.  That’s the good news to this point.

While there has been record spending with the reported blockbuster deal with Aaron Judge at nine-years and $40 million a year, there are 20 teams that have done no significant signings during the Winter Meetings, so far. At some point, 20 teams will have made some acquisitions with paydays over $10 million, and some of those signings might not happen until the end of January.

Many times, teams set the framework for a deal at the Winter Meetings, and will wrap deals up shortly. A source told us that Rizzo’s goal was to sign a starting pitcher before he left San Diego, and had reached out to five or six agents. While that does not seem like a lot of “reaching out”, you must remember that some agents represent more than one player that Rizzo could want. The issue is that there is immense competition from the other 29 teams, and the Nats are going to have to offer a lot more than a team projected to make the playoffs in order to get one of the better pitchers like Jose Quintana who the Nats lost out on in the bidding war per sources.

Here’s a video from this morning:

On the 800-pound gorilla in the room, the Nats exploration of the sale of the team will be heading into it’s ninth month this weekend from the time the press release was issued that the team was going to explore a possible sale on April 11. With no sale finalized, it has certainly put some uncertainty on the direction of the team.

“Update? I have no update,” Rizzo said on the sale of the team. “Those conversations are above my pay grade. We have our marching orders with business as usual. … We have some clarity on our budget constraints. We have to be prudent with the moves we make.”

The ole “business as usual” response just is not enough. The fans deserve to know directly from principal owner Mark Lerner as to the current and future direction of the team.

“I can’t even give you that much,” MLB commissioner Rob Manfred said in a response to when the Nats would be sold.

Manfred went on to say that he would not allow the Orioles to leave Baltimore while he is commissioner, “As long as I have this job, the Orioles are going to be in Baltimore.” But no response on the MASN issue with the ongoing lawsuit that we have reported as the obstacle to the Nats being sold.

We broke this news back in September on the MASN debacle. Subsequently, we also reported that MLB tried to dangle the All-Star game to the Orioles as an incentive to settle the MASN issues, but no progress was made and everything with MASN and the sale of the team seems to have stalled per our source.

The big losers in this are the Washington Nationals fans.