Ted Leonsis just got a new billionaire partner, but what does that mean for the Nats? 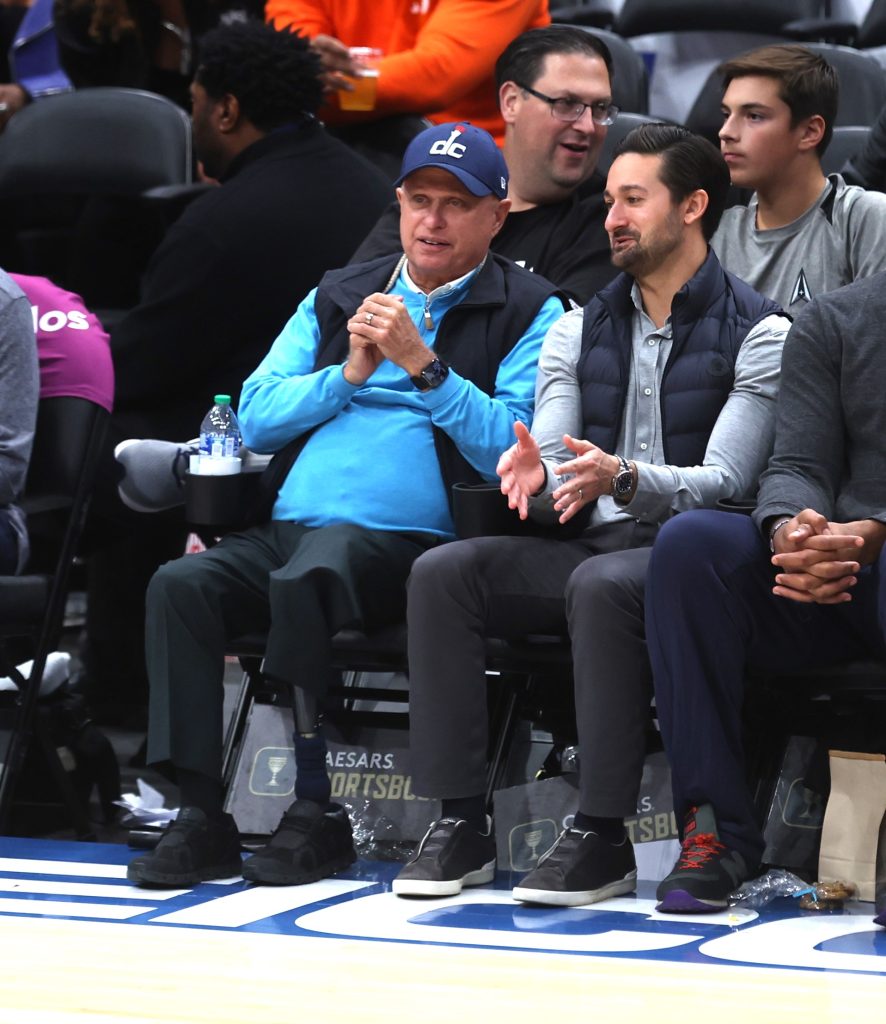 We have known for weeks that billionaire Jeff Skoll was joining Monumental Sports & Entertainment as the 20th partner with Ted Leonsis. What we did not know was that Leonsis would pick yesterday to send out the press release for Skoll joining the partnership, and the timing and release of details is quite interesting. At the same time, Washington Nationals’ principal owner as well as Monumental partner, Mark Lerner, was seen publicly for the first time this year at a Wizards game, something he rarely does courtside. After our article over the weekend caused waves it seems per a source, Leonsis and Lerner wanted to show some sort of solidarity the source told us. But Lerner was not seated next to the senior Leonis, rather his 33 year old son,  Zachary Leonsis, who is certainly a rising star in the industry.

Our source went on to say that Skoll invested a lot of cash ($300 million per Forbes) into Monumental for a reason, and not to sit in a cash account — but there is certainly a lot of discussion if that cash went into the MS&E coffers or as another source who works for Leonsis and was not authorized to speak about it publicly, contacted us to say that Skoll was just merely a replacement for Rick Kay, a MS&E partner who passed away in October 2020. If Skoll simply was replacing Kay, all of that money might have just gone straight to Kay’s estate, and that would negate much of the hype of Skoll joining the MS&E investment group. The oddity to this was that there was no mention of this in the press release.

In August, the Washington Post wrote that the Nats were trying to complete the sale by November. Tick tock, we are hours before the calendar turns to December and just four days before baseball’s Winter Meetings.

The Nats showed some signs of a pulse yesterday in committing $6 million to corner infielder free agent Jeimer Candelario, and the team also signed free agent Stone Garrett to a major league deal. So we definitely got some proof of life from the Lerner ownership group on a few fronts.

But all eyes right now are on Skoll who Forbes ranks with a $4.2 billion net worth, and guess what, that is a billion more than the oft-mentioned David Rubenstein who still is not listed as a Monumental partner. So the speculation begins, is Rubenstein going to partner with Leonsis on a purchase of the Washington Nationals?

“It doesn’t matter much,” said Robert Malandro, Managing Partner at Whitecap Sports Group in regards to Rubenstein. “Partners are in and out and back in on deals all the time. Sometimes in the [bid process for a team] they move from one ownership group to another.”

Malandro would know as his firm’s specialty is working with investors that want to join sports ownership groups. Remember, there are few billionaires out there who could lead an ownership group, but plenty that want to join in like entertainment mogul Jay-Z, and actor Matthew McConaughey who is nowhere close to the billionaire’s list. Look at Alex Rodriguez who tried to buy into the Mets and then pivoted into a smaller position with the Minnesota Timberwolves. ARod was at that Wizards game on Monday night with Leonsis and Lerner.

The Nationals sale/non-sale process is so intriguing on many levels. Leonsis and MS&E look to be the last group actively engaged with the Lerners. The last few sales of MLB teams happened quickly like the purchase of the Mets, Royals and Marlins. The Nats process is entering its eighth month. Remember, there are only 30 MLB teams, and you could go years with no teams for sale, and MLB has the Nats, Angels, and Orioles all reportedly exploring sales. But the timing of Skoll entering the arena should certainly raise a few eyebrows that could mean a move for the Nats is still in play with a different structure, or Monumental is pivoting towards something in entertainment or another sports franchise.

“Fellow billionaire Jeff Skoll’s minority investment of about $300 million in Monumental Sports & Entertainment, the entity that officially owns Leonsis’ sports teams, places a controlling enterprise value of $4.1 billion on MS&E, Forbes has learned. That would mark a 23% rise since January, when Forbes valued MS&E at $3.32 billion. The deal, which is for less than 10% of MS&E, values the Wizards at $2.5 billion and the Capitals at $1.2 billion, according to a source familiar with the deal who was not authorized to speak about it publicly.” — Mike Ozanian for Forbes

What we are hearing is that Skoll’s wealth is extremely liquid at this point making him an extremely valuable partner, and he brings incredible knowledge of the internet and auction space from his years as the president of eBay, plus he started a Hollywood studio, Participant, in 2004. Another major player in Monumental is Sheila Johnson, the person behind the BET Network.

“Something big is going to happen. Ted [Leonsis] has come too far to walk away empty handed at this point — I have to think he will at least try to secure a large portion of the Nats if not the whole thing. Also, I hear the Commanders are for sale. … It is incestuous in a business sense. Mark Lerner is already a partner in Monumental. The Lerners tried to buy the Redskins before Snyder. I think Ted [Leonsis] is persistent and patient just like he was when he got the Wizards and Capitals from the Pollin family.” — a source who has known Leonsis for years

But let’s face it, the sourced reports we got here are the ones that feel like pieces of a larger intricate puzzle ready to be solved. Most reading here just want a better Washington Nationals product and do not care who signs the paychecks — just put a winning team on the field and sign some larger paychecks.

“You have to be comfortable with taking risks,” Zachary Leonsis said to Sports Business Journal earlier this year. “As a family and as an organization, we’ve certainly embodied that.”

Risks are part of having an aggressive business model. Calculated risks are how you stay successful. Long-shots rarely pay-off and if you want to see the future of the Nats, just take a look at Baseball America today as they look at the here-and-now in the farm system and a look into 2026. Here we don’t know how things will look in six months when the 2023 MLB season is two months complete, and we cannot say with any certainty whose name will be on the owner’s suite on the Lincoln Level at Nationals Park.

This entry was posted in Analysis, Feature, Lerners. Bookmark the permalink.
← Previous Article | Next Article →