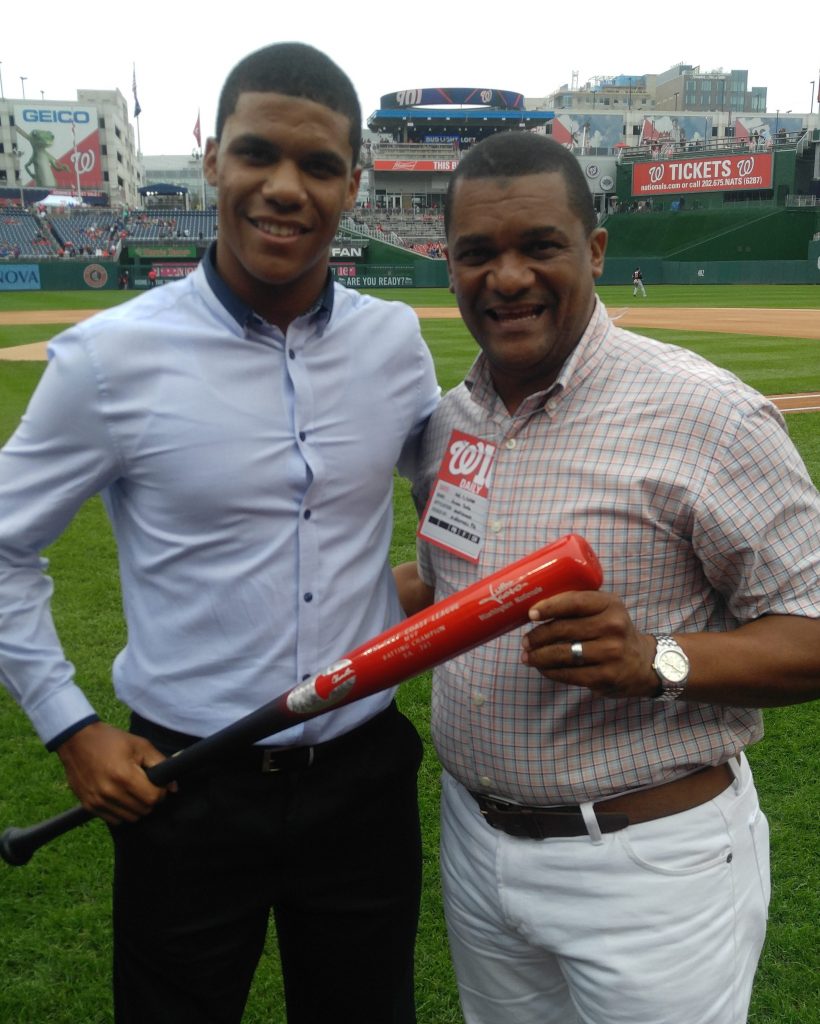 And Maybe Sign Their Young Stars To Braves-Like Extensions?

This paper argues the Nationals are quite conceivably in a *better* position to build around Soto as a fundamental piece of their 2025+ team than they were before the trade. For those who look to building a long-term window with Soto as the centerpiece—it can still happen. Indeed, probably more likely to happen than if the Nats had not traded Soto and kept trying to extend him while developing that #27 farm system into a new window. You see, Soto is set to be a free agent after the 2024 season.

Sure, it’s a longshot. Pulling off the Aroldis Chapman “flip them for prospects and sign them back in free agency” has to my knowledge happened exactly once in MLB history.

That said, Plan A (extending Juan before free agency) would have been arguably even more of a longshot than pulling a “Chapman flip and return.” If Juan (through agent Scott Boras) had countered the Nats $440M offer with a “Harper contract length, Trout AAV” counter (essentially 13/483M) I think there is a real chance the Nats would have done that.

*But Soto (through Boras) didn’t even counteroffer*.

“We did feel that we were not going to be able to extend him,” general manager Mike Rizzo said after the trade on Tuesday. “And we felt that at this time, with two and a half years remaining, three playoff runs available with Juan Soto, he would never be more at more value than he is today, and that’s what we predicated it on. There was no edict to trade him or not to trade him. It was business as usual. Ownership gave me the latitude to make a good baseball deal if I felt it was a franchise-altering deal, and it turned out we got one to our liking, and it worked.”

The morning after the Soto trade, Rizzo was on his scheduled Wednesday morning spot on the Sports Junkies show on 106.7 The Fan. He said he couldn’t go into specifics of re-signing Soto as a free agent since he now plays for another team, but Rizzo certainly did not say he wouldn’t pursue him.

“The agent [Boras] has a history of taking most or all of their superstar players to free agency,” Rizzo said. “And just the tenor and the tone of our conversations led us to believe that. … We made three offers in the last year to Juan and none of them were countered, and there was not much discussion besides, ‘No, we’re not gonna take that offer.’ So it’s what I kind of read into it and knowing the uncertainties of the ownership situation, we felt that it was unlikely that he’s gonna sign an extension before he went to free agency.”

There you have it from Rizzo’s perspective. Obviously a matter of opinion, but I (and I suspect the Nationals) took that as clear evidence Juan is not planning on extending with *anyone* before 2025. Trading him to the Padres if Manny Machado does not opt-out of his contract after the 2023 season would make it very unlikely they keep Soto past 2024 — and they could certainly trade him by the trade deadline of 2024.

Like the vast majority of Boras clients (Stephen Strasburg an extremely rare exception the Nationals never seem to get credit for getting done), Juan is “betting on himself” and enabling himself to pick top dollar/which team he signs with. Just like Trea Turner has been doing (note Trea has *not* signed an extension with the Dodgers. Those cheapskates!). And Judge. And Correa. Etc. Normal for baseball in 2022, nothing at all unusual about it.

So, if one assumes Soto *was and is* planning on testing free agency the Nationals will in 2025 be vying to sign Juan along with the other 29 teams. That will take money (gobs of it) as well as being able to show Juan he’s signing on to a team with a good shot at winning for many years to come. Knowing that, which of these Nationals teams seems better placed in the 2024/25 offseason to compete for Juan’s future:

– TEAM A: a Nats team with Soto playing out the string to 2025 and building on their ~27th rated farm system (and possibly trying to sign 1-3 pricey free agents to “compete early” OR

– TEAM B: a Nats team that held onto Soto, possibly signed a couple of free agents while trying to extend Juan and then flipping him at the 2023 trade deadline when it was clear Juan was not extending with the new owners either OR

The cost-controllable is significant here. In the above the Team A and Team B could try to sign on a couple of pricey free agents to make the team respectable/convince Soto the Nats are back on the way up. Tack on the Strasburg contract (with Corbin, thankfully, largely off the books and definitely off the roster) with some free agents in 2023/24 and the financial flexibility of the club drops noticeably.

TEAM C, on the other hand, can save its financial powder for two long term purposes:

1) Let’s not pretend the Soto bidding war will be cheap with Cohen, the Dodgers and the Yankees out there. This will take an AAV of $40-45M. I don’t think Juan makes the Nats pay a “Werth surcharge” but I don’t think the Nats are getting any discounts with Juan either. Go big or go home.

2) The Nats would have the flexibility to offer (relatively) team-friendly extensions a la the Braves to the most promising 1-3 players from the “new crew.” A pre-arb or arb1 player making $0.5-1M per year may see a $12-$20M AAV contract extension that includes an *immediate* pay raise as well worth signing rather than make $1-5M in their arbitration years and see what they get in free agency 3-5 years later.*

So TEAM C above has a much better talent base, higher financial resources/flexibility and a much better shot at multi-year success than TEAM A or TEAM B. Which Nationals team do *you* think has a better chance to sign Juan Soto in 2025? And which team above is in better shape if they make a run at signing Juan as a free agent in 2025 but eventually lose the bidding war?

Bottom line: all of us want to see a new Nationals window with Juan Soto as its centerpiece. I think the best chance of seeing Juan as a National in 2025 is the road we are on now—as well as being the best long term road if we don’t sign Juan. Signing Juan to a second stint in the City Connect cherry blossom shirt is *still* a longshot, of course, but no more of a longshot (and probably a better bet) than the TEAM A or TEAM B Nationals options.

Of course, this all depends on new ownership being willing to go “all in” on Soto in 2025. Would be nice if new ownership used their much greater financial flexibility to offer early extensions to promising young talent (Adams, Gores, Ruiz, Hassell, Cavalli, House, Green, Wood, Vaquero, Susana etc). Some of them might be willing to do so! *

And the prospects have to develop (Captain Obvious reporting again!). New ownership will need to build on the (hopefully) new development plans the Nats seem to have (finally) recognized as fixing a systemic team problem. But those caveats apply to the notional TEAM A and TEAM B Nationals above.

So while there are no guarantees in baseball, I think the Soto trade handled correctly gives the Nationals at least as good and arguably *better* chance to re-sign Soto in 2025 and use him as a centerpiece of the new Nationals window along *with* the cream of the last two drafts plus the Soto Five. Make it so, Nationals!

* This is where I think the 2016-2019 Nats have been hamstrung on offering extensions. Even if the Lerners were willing to entertain the idea, they could not sign extensions involving immediate pay raises for players without blasting into Cohen-worthy CBT territory.

What would tacking on $21.275M do to the 2019 team? Well, signing Hudson and the rest of the “bullpen repair” along with pieces like Cabrera would be tacked on to a team already past the CBT right from the beginning of the 2019 season—and the team had *already* exceeded the CBT in 2017 and 2018 (QED, three-year violator penalties). So if the team signs Trea to an arguably team-friendly extension in 2018 the Nationals have to go Full Cohen to make the run it did in 2019. With no guarantees of success and that 19-31 start discouraging an “all in” push.

So while we curse the Braves for their extensions and curse the Lerners for not signing our players to extensions, let’s not ignore the very real impacts that would have cost the team in terms of financial flexibility/CBT penalties. Like them or not, agree with them or not, it wasn’t just “stupid short-sightedness” (or “L3rn3rs R CHEEP”) that made it financially tough for the Nationals to offer long-term extensions to arb/pre-arb eligible players during their last window.

“Happily” (okay, silver lining of a very dark current cloud), the new-ownership Nationals in 2023 and 2024 will not have this issue. The team payroll baseline will be a *lot* lower—especially looking downrange to when Corbin and eventually Stras come off the books (as well as working through the deferred Max payments and such—those deferred payments don’t count against the CBT but still count against the team ledger). That lower payrolls baseline will enable the Nats to make offers to whichever of the “next wave” players with a Soto/Tatis/Acuna style breakout/Rookie of the Year level seasons to (relatively) team-friendly extensions that were a lot harder for the “going for it this year and every year” Nationals to make 2014-2019.

And if the new ownership has the imagination to do this, it becomes a self-reinforcing trend. The Braves have financial space to extend Olson and Riley in part because they already have cost-controlled extensions with Acuna and Albies. Having locked those in gives the Braves financial flexibility to offer further extensions where it looks right. Don’t just get mad at them—learn from that!