Close but no cigar for the FredNats; Tim Cate dominates! 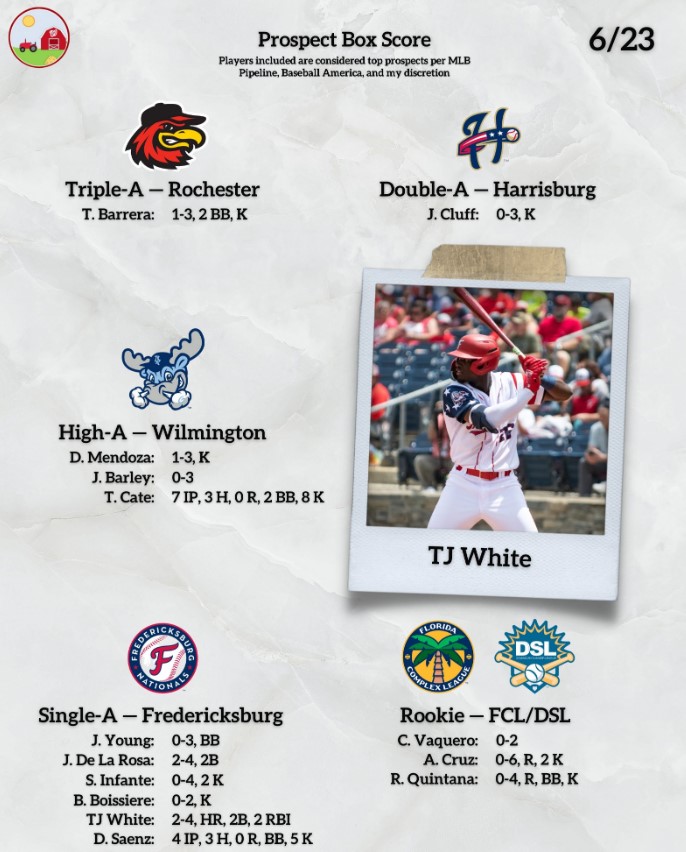 Maybe the biggest news on the minor league slate yesterday was that Anibal Sanchez made his 2022 pitching debut on a rehab assignment in the FCL. It was brief and nothing special. He gave up one earned run over 3.0 innings. Every level above him in the Washington Nationals system yesterday threw zeroes. It was quite impressive, and led by Tim Cate who bested former Cy Young candidate Matt Harvey in a High-A pitcher’s duel. Harvey was pulled after 6.0 innings and Cate went 7.0 complete scoreless innings.

⭐️Tim Cate for star of the night

The FredNats had a must-win game to secure first place in the Carolina League North Division and they got great starting pitching from Dustin Saenz who threw zeroes, but the bullpen yielded three runs, and TJ White tried to singlehandedly carry his team as he drove in two runs including a monster blast to bring his team to within one run, and it just was not meant to be. Jeremy De La Rosa was the other bright spot in this one with two hits.

It is games like this where the pressure is at its highest in a playoff type atmosphere, and it was Saenz, White, and De La Rosa who showed that they got better as the Hi Lev ramped up. White and De La Rosa tallied four of the team’s seven hits.

TJ White’s mom Elizabeth for a birthday present said, “I asked for a dinger on my bday and he delivered 😁.”

As we wrote, Cate pitched a gem and bettered Harvey who was at High-A for a rehab assignment. The ump was no friend of Cate’s on this night and missed several calls, and Cate shook it off and persevered.

Cate got no help from the ump too.

In this pitcher’s duel, the scoreless game headed into the bottom of the eighth inning, and it was the Blue Rocks who scored the only run of the ballgame thanks to an RBI single by Jose Sanchez that scored Jeremy Ydens. Sanchez got an opportunity to bat following a battle at the plate by Cole Daily in the previous at-bat, which resulted in a walk. Sanchez cashed in on the opportunity and emerged as the hero along with Cate.

In the bottom of the ninth inning in this 1-0 game, pitcher Malvin Pena got an early birthday present on the IronBirds and recorded his first save of the season.

The Blue Rocks have now have a  four winning streak.

The Rocks win 1-0 over the rival Ironbirds.

The Senators scored first Thursday night in Akron, but the lead didn’t last long in their 8-2 loss to the RubberDucks. Wilson Garcia homered leading off the second to give the Sens a 1-0 lead. Ronald Herrera started this game as he came off the injured list Thursday and pitched three scoreless innings while facing the minimum nine batters. Once the game went to the bullpen, Akron ran away with the game.

Andrew Young homered in the ninth for the Senators and he had a single in the game as the offensive star for Harrisburg. The home run was his second in the series.

The loss is the sixth straight for the Senators.

Corey Abbot started this game with 3.0 scoreless innings in a bullpen game for Rochester, but the rest of the bullpen had their share of struggles. In fact Syracuse scored four runs in the ninth inning to make a 10-5 laugher into a 10-9 win and Jordan Weems had to come in for the save, and rescue Patrick Murphy who ate the four earnies. Weems K’d  two batters on his way to getting three outs to seal this win.

Andrew Stevenson was the offensive star in this game and went 3-for-5 with a home run and four RBIs. Stevenson has a hit in eight of his last nine games, going 15-for-35 (.429) during his run…the outfielder is batting .308 this season, tied fourth in the International League in batting average.

Josh Palacios also had three hits and Joey Meneses added two key hits in this one as the Red Wings needed every run in this one to win it.

Armando Cruz had one of those games where he put four balls in play and nothing found a hole. That happens.