Mixed results in the minors as Rutledge struggles, Adon shines! 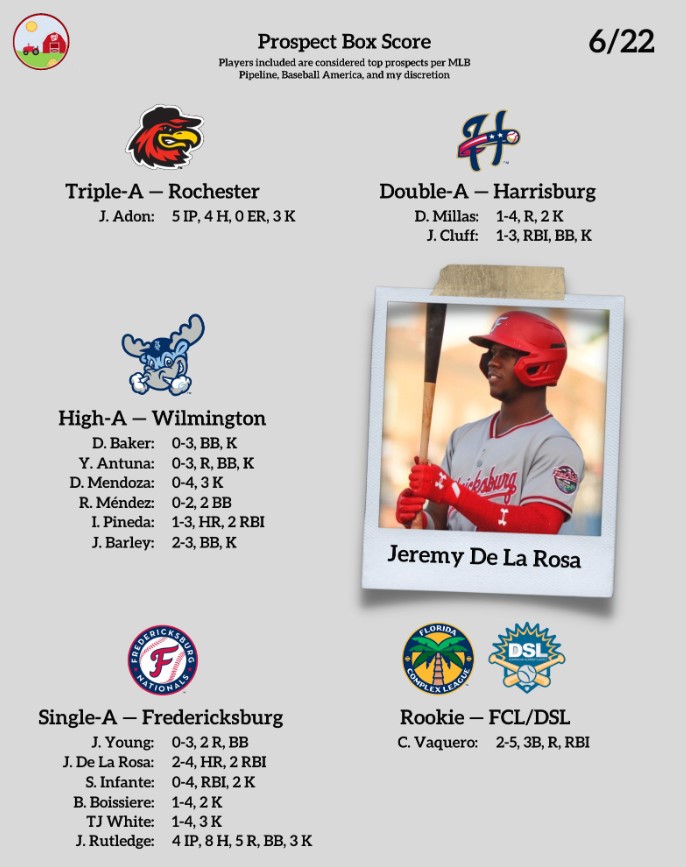 After winning back-to-back extra inning games, the FredNats could have used a win to help secure first place in the Carolina League North Division with two games to go in the first half but that did not happen as 2019 first round pick Jackson Rutledge struggled and gave up 5 runs over his 4.0 innings.

In order to clinch the first half championship, the FredNats need a win today and losses by both Carolina and Lynchburg. The Mudcats play at Down East, and the Hillcats are playing a doubleheader at Delmarva. The FredNats own the tiebreakers over both those teams, and Lynchburg only needs to lose one of the doubleheader games for the FredNats to draw even.

Dustin Saenz will start the final game of the first half for the FredNats. First pitch is scheduled for 7:05 p.m.

Michael Cuevas pitched six scoreless innings, striking out seven overall and throwing 56 strikes over 81 pitches. He would earn the win thanks to Israel Pineda who smacked a 2-run homer for the only runs of the game for Wilmington, and it turned out those runs would be enough on this night.

Jordy Barley singled and swiped his 20th base of the season in this game. He went 2-3 with a walk, but nobody could drive him in.

Jack Sinclair who was just promoted to Wilmington from Fredericksburg, earned the much needed save.

The Rocks win 2-1 over the rival Ironbirds.

The Akron RubberDucks scored 11 runs in the seventh inning to crush Harrisburg 17-2 on Wednesday night in Akron. The Senators scored their two runs in the ninth inning. Akron moves into first place with four games remaining in the first half.

Jackson Cluff and Jecksson Flores both had RBI singles in the ninth inning for Harrisburg.

Joan Adon turned in five strong innings with no earned runs surrendered, and Josh Palacios collected two hits and two RBI for Rochester. There was even a Mason Thompson sighting as he threw a perfect inning on his rehab assignment.

We did not actually watch Adon pitch so we don’t have any intel on what he was throwing in this game, just that the results were good.

Another great game for Cristhian Vaquero in the DSL as he went 2-5 with a triple.