Players to watch in the College World Series 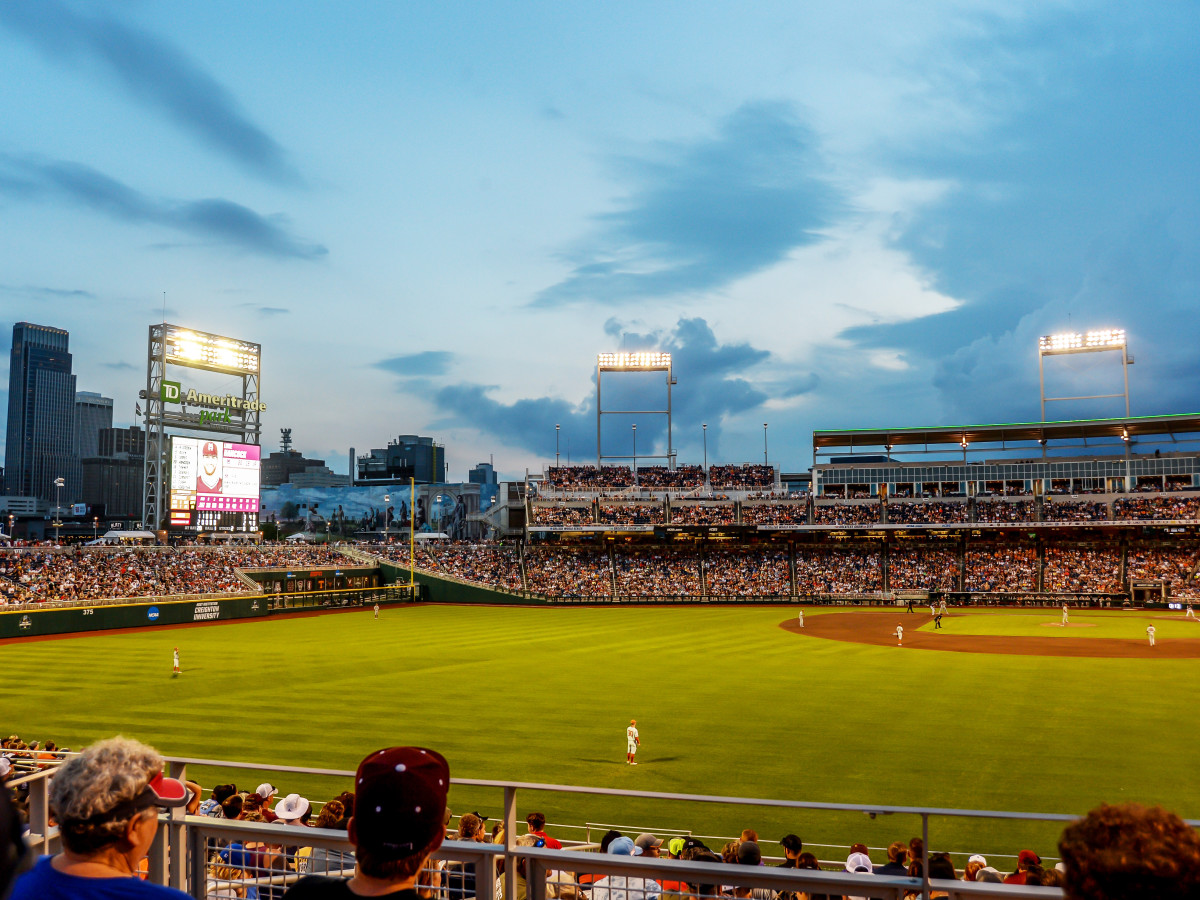 The College World Series has been played in Omaha for over 70 years. Photo via Steven Branscombe/USA TODAY Sports

The Greatest Show on Turf has returned to Omaha for the 72nd iteration. Each of the eight teams that are vying for the National Championship have balanced rosters that have contributors littered within. That being said, some players rise above the others and are top prospects at the next level. For the longest time, the College World Series has been an opportunity for players to put their skills on full display. This year, though, it is different as the MLB Draft is well after the festivities. Players like Pete Alonso and Will Bednar have etched their names in CWS lore, something that this year’s crop of players will get their opportunity to do as well.

Brock Jones (OF): Jones might be the best all around hitter in Omaha, a title that is not insignificant considering some of his competition. He has a truly jaw dropping left handed power stroke with the ability to drive the ball to all fields. His list of accolades is almost as lengthy as the list of records he owns. As a junior, he has hit more home runs this season (20) than he did in his first two seasons (19). His slash line of .327/.455/.665 is something to behold. His entire persona commands the batter’s box in a manner that rarely is seen in college. In the field, he has similar skills to Joc Pederson, justifying that comparison further as he combines a similar level of athleticism. Brock Jones likely will not be selected until the late first round or the early second, but Jones is just as talented as anyone at the top of the board.

Quinn Matthews (LHP): Matthews is one of the few prospects that allows for great creativity on the part of the organization drafting him. For Stanford, he was a swingman who served in both the rotation and getting multi-inning relief work. He has a very average fastball in terms of velocity, but his deception makes him difficult to hit. Adding onto this deception with his arm angles and body contortion, Matthews has a devastating changeup, by far his best pitch. Rounding out his arsenal is a pair of breaking balls with his slider being far better than his curveball. Matthews does, however, have concerns around his control and stamina due to just how many pitches he throws over an outing. That being said, if he slips outside of the first ten rounds, it should be seen as a huge shock to everyone.

Dylan Rock (OF): The Aggies, in all fairness, do not have many big time prospects on their roster. Unlike some of their opponents, they have a very well rounded, balanced team that uses their entire roster to beat teams. Their best hitter, though, has been Dylan Rock. After transferring from UTSA, all Rock has done is hit the cover off the baseball. In his largest sample size of his college career, Rock has hit for a .332 average with 18 homers and 56 RBI, leading the Aggies in the latter two categories. For a team with few scout darlings, the Aggies have a standout in Dylan Rock, solidifying himself as someone who will likely see himself go anywhere from rounds 15-25.

Ivan Melendez (1B): Ivan Melendez might be the easiest comparison to formulate out of anyone on this list. A big, strong power hitter with long arms and the ability to crush the ball to all fields. If that sounds anything like Giancarlo Stanton, that would be correct as that has been his MLB comparison. Oddly enough, he was drafted last season by Stanton’s former team, the Marlins, in the 16th round. This year, though, Melendez has elevated his game greatly. He has hit a mind-boggling 28 home runs and 85 RBI in just 54 games. He offers incredibly raw power that has been graded by scouts as a 60 on the 70 point scale. One of the downsides with Melendez, however, is his ability to do anything else besides mash. He is far from the most athletic player, serving as a DH in many cases and playing below average defense at first base. Although he is making positive strides defensively, scouts worry about his long term outlook being as a one trick pony. Regardless, he does that one trick exceptionally well and should be taken in the top four or five rounds.

Pete Hansen (LHP): The Longhorns have been predicated on having dominant pitching and that trend continues with Hansen. Unlike many of the fireballers that have come before him in Austin, Hansen uses breaking pitches and command to keep opponents off balance. If someone were to watch Hansen’s starts and only look at the radar gun, it would be puzzling as to how he is getting so many swings and misses. Rarely does Hansen reach a velocity higher than 91 mph. Instead, his slider, ranging from 78-82 mph, makes his fastball all the more effective. His curveball also allows for his fastball to appear to be thrown harder. With great depth and tumbling action, his curveball is a tremendous outpitch as well. Hansen is considered to be one of the most “pro-ready” prospects in the game, giving him incredible value in the first couple of rounds.

Sonny DiChiara (1B): For an Auburn team with very few players receiving scouting attention, Sonny DiChiara rises above everyone else. The massive power hitting first baseman has clobbered 22 dingers in his first season in Auburn. Another transfer, this time from Samford, he has collected numerous awards and other accolades. DiChiara has become the singular best player for the Tigers’ offense and, at times, kept them afloat. Besides the obvious fact that scouts have shied away from him because he does strikeout more than desired, he is not a great athlete and has average to below average abilities at first base.

Cayden Wallace (3B): Arkansas has always been a proud program that sends countless players to the next level. Cayden Wallace is looking to add his name to the lengthy list of players. He has played the hot corner this season, but also started in the outfield earlier in his collegiate career. That is the place where most scouts envision him long term. Regardless, he has a strong, polished swing that allows him to hit for insane power to the pull side. He likely needs to get better at using the entire field, but he has emerged as one of the best hitters in college due to his ability to patiently wait for his pitch to drive.

Peyton Pallette (RHP): Palette might just be one of the most electrifying prospects in the draft. He routinely registers in the mid to upper 90s with ease. He is dripping with strikeout potential and can be a future ace if he develops properly. As good as his fastball is, he equips a curveball that is arguably better and serves as his outpitch. Pallette has to work on adding a better third pitch as his changeup is only average. Regardless, his comparisons to Walker Buehler offer much encouragement.

Jack Brannigan (RHP/3B): Jack Brannigan might just be one of the most confounding prospects in the entire country. He might have the best arm strength on the mound, regularly sitting in the upper 90s with his fastball. However, he has only thrown 23+ innings in his three years in South Bend. Some of this is due to the fact that he has made it abundantly clear that he prefers to play third. It is not a bad thing that he enjoys hitting. His strengths clearly are on the mound, making for a complicated situation for a team that drafts him. If he switches to pitching full time, he could become a hidden gem for any team.

Peyton Graham (SS): Graham is the player that scouts think might have the highest ceiling out of anyone in this College World Series. Although he is currently a shortstop, he can play either middle infield positions as well as third and the outfield. His versatility tantalizes scouts who view him as a Swiss army knife. At the plate, he has a lot of good foundational skills. Traits like solid bat speed and the ability to recognize offspeed pitches. However, he needs to do a lot of developing at the plate to reach his full potential. He does, though, possess a lot of raw contact skills to drive the ball to both gaps. As one of the most intriguing prospects in the draft due to the different directions he can take his skills, it would surprise no one to see him drafted in the first round or early in the second.

Jake Bennett (LHP): The high school teammate of Cade Cavalli, Bennett has made a name for himself outside of sharing a rotation with a top prospect. As more of a control pitcher, Bennett thrives off getting hitters to beat the ball into the ground. His groundball rate ranks very high and dominates right handed hitters. His patented changeup has forced opponents to play into his game plan which is to work quickly and efficiently. In a draft that, at some points, seems barren with starting pitchers, Bennett could shoot up the draft boards.

Hayden Dunhurst (C): The Rebs have a very talented roster, but the majority of their talent has graduated to the next level. Last season, they saw multiple players taken in the first few rounds. That left players like Dunhurst as the last remaining player drawing attention from scouts. Dunhurst has a very high ceiling, but his floor is something that scouts question. Likely a pick anywhere from the third to sixth round, Dunhurst has perplexed scouts due to his somewhat inconsistent play. Behind the plate, he has a strong arm and receiving skills that flash high potential. Scouts have flagged the fact that he has some mental lapses and gets lazy with his blocking at times. He has a very solid bat from the left side, but needs to refine his approach against breaking pitches. Overall, he has the potential to be a starting catcher. Before that, he has a lot of work to do around the edges.

While this year’s College World Series is not as ripe with first round talent as years past, that does not mean that there are few high level players. Each of these teams have their distinct identities and rosters that mirror them. All of these players are winners and have incredible intangibles that dazzle scouts. Soon, these players, as well as many others, will put on a truly unforgettable performance on the biggest stage in college baseball for the entire national audience.