Luis García is the Player of the Day Once Again in Saturday’s MiLB Recap! 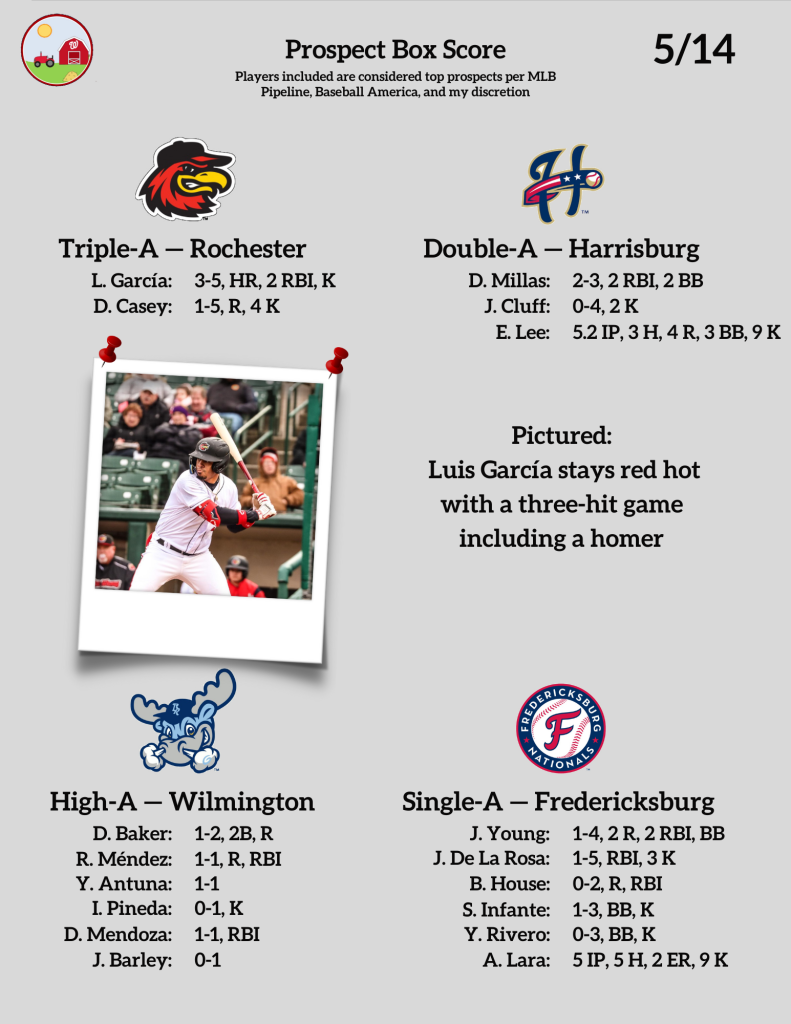 The Blue Rocks can’t catch a break with weather as the first game of their doubleheader was suspended in the 3rd inning.

Top prospects, Evan Lee and Andry Lara went today for their respective teams and the Red Wings looked to make it eight wins in a row.

Andry Lara bounced back after a three-walk outing on Mother’s Day. He’s done a good job of limiting walks in his past 13 innings, a promising development for the 19-year-old top prospect.

The FredNats scored seven runs on seven hits with six of the starting nine tallied an RBI. Brady House got it started with an RBI groundout in the 1st inning and they never looked back.

Like I said, Wilmington was unable to get through four innings of their doubleheader and will continue the game tomorrow, the 15th.

Evan Lee was spotty today giving up four runs on three hits and three walks, but he gave the team a chance to win. Each reliever that came in after him gave up one run of their own to make seven for the Flying Squirrels.

The offense managed ten hits, but only four runs. Drew Millas is the hitter of the game with a two-hit, tw0-RBI game – his first productive game in a Sens uniform.

Spoiler alert: the Wings won their eighth game in a row today.

They out-hit the WooSox once again with help from, the man himself, Luis García who had three hits and a bomb. Andrew Stevenson went 5-5 with three doubles and the team totaled 14 hits.

Sterling Sharped turned in anther impressive start with four scoreless innings and that’d be all she wrote. Red Wings win 9-5.

The Nats’ minor league system had quite the night.

The Wings are on a roll and the starting pitching prospects keep notching high strikeout games.