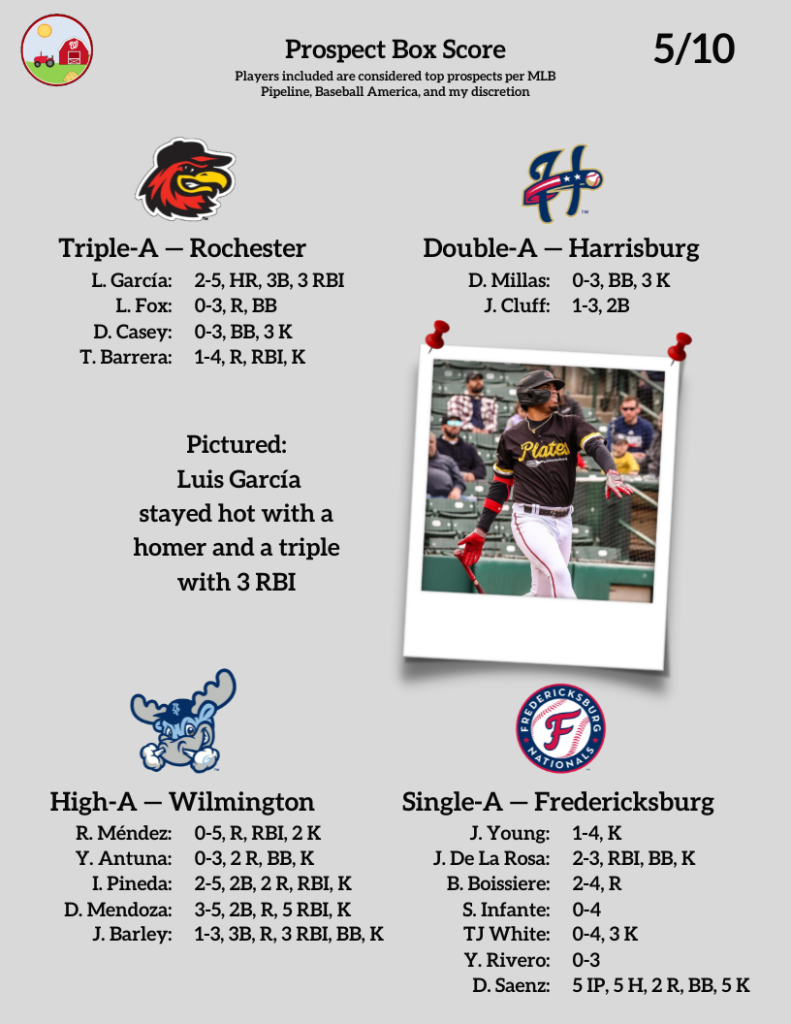 Following yesterday’s universal off day, all of the affiliates started a new series today.

The FredNats will face the Kannapolis Cannon Ballers (White Sox Single-A) at home.

The Blue Rocks are playing the Brooklyn Cyclones (Mets High-A) on the road.

The Senators are hosting the Richmond Flying Squirrels (Giants Double-A).

And the Red Wings are traveling to Worcester to go up against the Red Sox (you guessed it – Red Sox Triple-A).

Dustin Saenz turned in a solid start and was picked up by Peyton Glavine, Jack Sinclair, and Orlando Ribalta who threw a combined four innings with seven strikeouts, one walk, and one run.

The offense was held to six hits and Jeremy De La Rosa and Branden Boissiere had four of them. De La Rosa’s OPS is up to .993 after today’s performance as he also knocked-in one of the FredNats’ runs.

It wouldn’t be enough as the FredNats lost a tough one, 3-2.

It took a while, but the offense responded after a rough start from Matt Merrill. Heading into the 8th inning, the Blue Rocks were down 5-1. They left the top of the 8th with a 10 spot and a six run lead.

Despite the offensive explosion, the bullpen was the story of the day. They went for 8 1/3 innings with two runs and eight strikeouts after Merrill couldn’t get out of the second inning.

The Sens offense is in somewhat of a rut after being held to one run in their last three games (only 23 innings because of the 7 inning DHs). Tonight, in a 9 inning game, they were held to five hits with four coming off the starter. They also struck out a combined 12 times and only walked once. The stand-out was once again Jake Alu who went 2-4 with a double a stolen base. You would think he was batting .350 but he is at .281 after his slow start and is steadily raising that batting average.

On the flip side, the pitching was magnificent today. Ronald Herrera had a quality start twirling six innings of one run ball with seven punch outs. The bullpen picked up right where Herrera left off and finished out the game strong.

However, a baseball game can’t be won without a run, Senators lose 2-0.

Up in Rochester, the story of the year continues; Luis García has no business being in Triple-A. He’s now slashing .355/.416/.664 after his 2-5 performance with a homer and a triple today and he’s showing no signs of slowing down.

Some familiar faces in Andrew Stevenson and Jake Noll also had two hits and an extra-base hit a piece. Stevenson with a double and Noll with his second homer of the year, helping the Wings outscore the WooSox 8-2 for the win.

The Red Wings starting pitcher, Jackson Tetreault gave up a two-run homer to Jeter Downs (Red Sox No. 5 prospect per MLB Pipeline), but settled down after and did not yield another run for the rest of his outing. Tetreault ended with eight strikeouts and only three hits allowed in his 5 1/3 innings.

Top prospect, Drew Millas made his first career start in Double-A tonight after completing his rehab assignment in Fredericksburg.

T.J. White was back in the FredNats lineup after a week-long hiatus with a leg injury that did not land him on the IL, but he also didn’t play and now he must get his timing back.

Brady House remains on the IL with an undisclosed injury, but the game notes revealed some encouraging news that House could be back “with the hope of a return sometime later this series”

Darren Baker was not in Wilmington’s lineup tonight for an undisclosed reason. 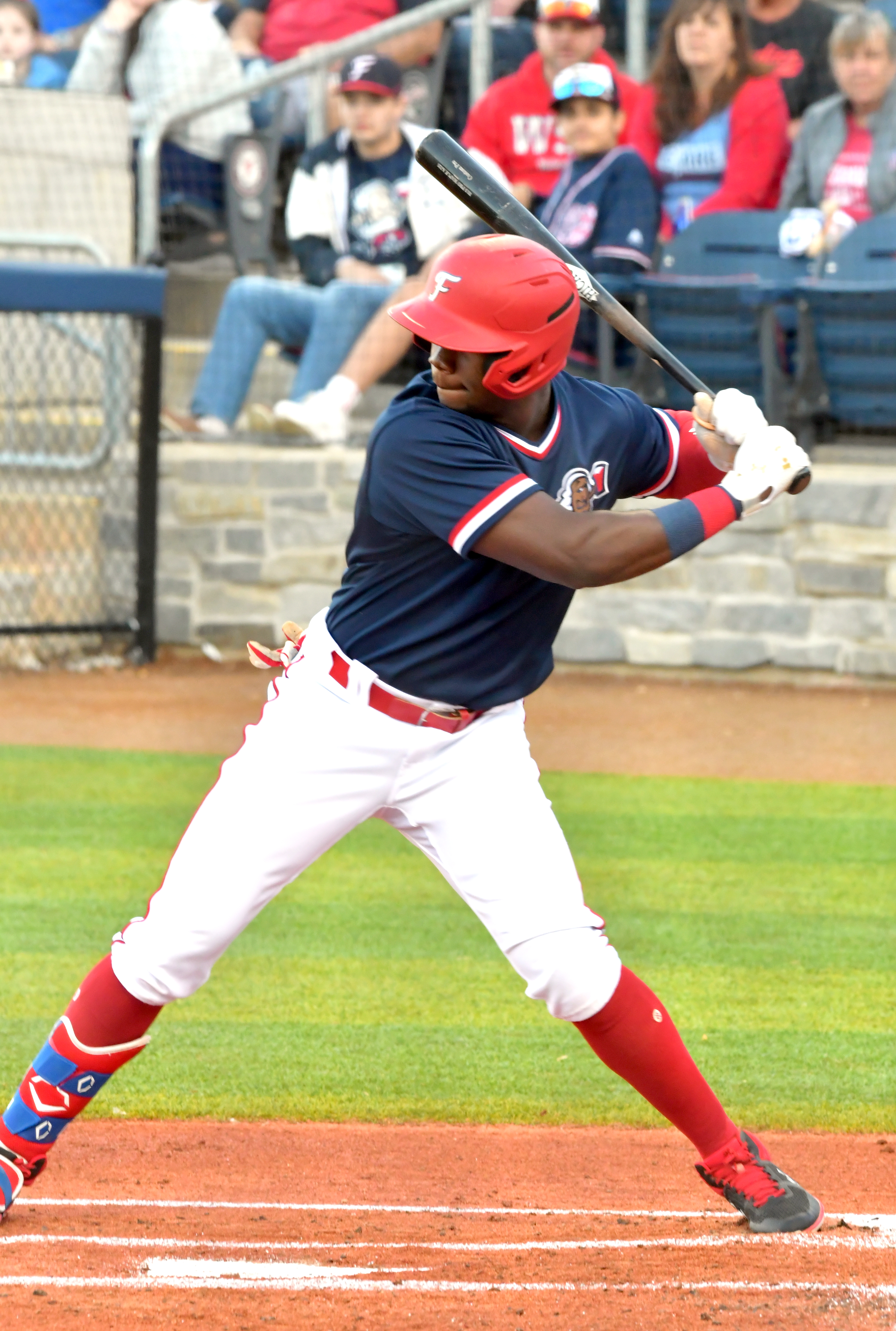 Jeremy De La Rosa is also hot at the plate; Photo by Clint Often for TalkNats