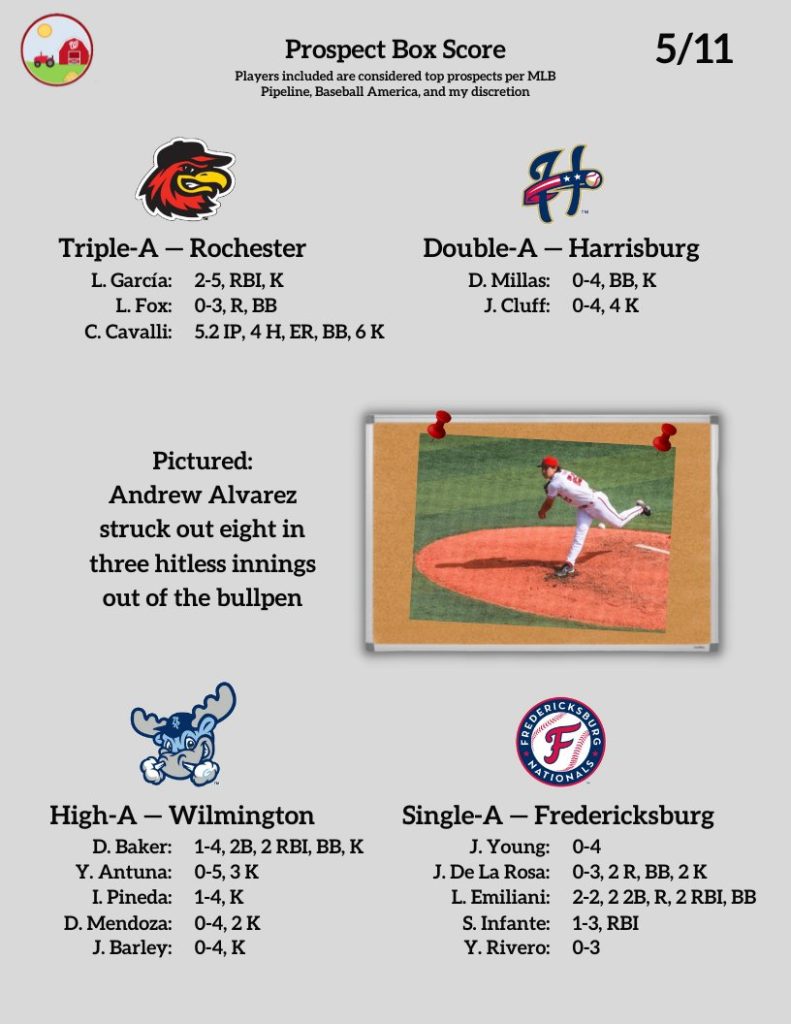 It was a sunny day around the affiliates today and there was plenty of baseball to enjoy it.

The Red Wings and FredNats both had afternoon games while Harrisburg and Wilmington played at their normal 6:30 PM start times.

Cade Cavalli, the Nationals’ #1 prospect, was on the bump for Rochester and he was great.

It only took two FredNat pitchers to shutout the Cannon Ballers with Bryan Caceres going six innings and only allowing three hits and three walks, then Andrew Alvarez making his second relief appearance of the year. Alvarez was tremendous, striking out eight over three hitless innings to close out the game.

They were able to score three runs on only four hits – two of the hits coming as doubles by first baseman Leandro Emiliani. The first two runs scored on those Emiliani doubles and the third came in on a Sammy Infante single.

Michael Cuevas was on the bump and gave up eight hits and four runs in his four innings of work. The bullpen managed to hold them for the final 3 2/3, but the Blue Rocks had to make up five runs.

Omar Meregildo chipped away with a solo homer in the 2nd, then Kevin Strohschein scored on a wild pitch in the 5th. They wouldn’t get anything else going until their last ups in the 9th when Darren Baker lined an opposite field double that plated two runs.

Unfortunately the late rally fell short and the Blue Rocks lost a close one, 5-4.

The Sens had their work cut out for them after their starting pitcher, Richard Guasch surrendered eight runs in 4 2/3 innings.

It took them till the 8th inning, but they finally scored some runs after a few ugly games at the plate. Jake Alu hit an RBI double to score their first run of the game, then Wilson Garcia smoked a two-run homer to bring Alu around. Another rally in the 9th led to a two-run throwing error and they managed to scratch across five runs.

It wasn’t enough as Harrisburg dropped another one 10-5.

Today Cade Cavalli made his sixth start of the season against a stacked WooSox lineup and he did an exceptional job keeping them at bay. The 6-foot-4 righty gave up some hard contact early, but his fastball velocity stayed consistent around 97-99 mph and he complimented it by throwing his off-speed for competitive strikes.

Cavalli took a hard line drive off his leg in the fourth inning, but stayed in the game. He seemed to slow down, but I wouldn’t read into it as it’s been a trend for Cavalli to lose steam around that time in his outings. In the end, he scattered four hits and a walk across 5 2/3 innings while allowing two runs (one earned run) and striking out six.

It took four relivers to end the game and they did not allow a walk or run in the final 3 1/3 innings.

Wings outlast the WooSox 3-2 for a thrilling come-from-behind win to secure their fourth victory in a row.

The Nats’ minor league system had a little bit of everything tonight. It was especially refreshing to see Cade Cavalli have a good outing.