Don: The discussion within the TalkNats community has already started about who to draft for the Nationals and what spot the team will get in 2023. As we all know, the new CBA introduced a lottery for the draft.

While it is possible to work out all the probabilities by hand, I decided to run a Monte Carlo Simulation instead to see what the likelihoods are for each of the 30 teams. I ran a million drafts and the results are summarized in the image below.

I decided to not use team names; so 1 represents the team with the worst record (after tie breakers), and so on, and so on. . .

Here are the rules I used:

I also decide to not factor in prior year results (e.g., the restrictions on consecutive years with a top 6 pick. I don’t believe those will apply for the 2023 draft. 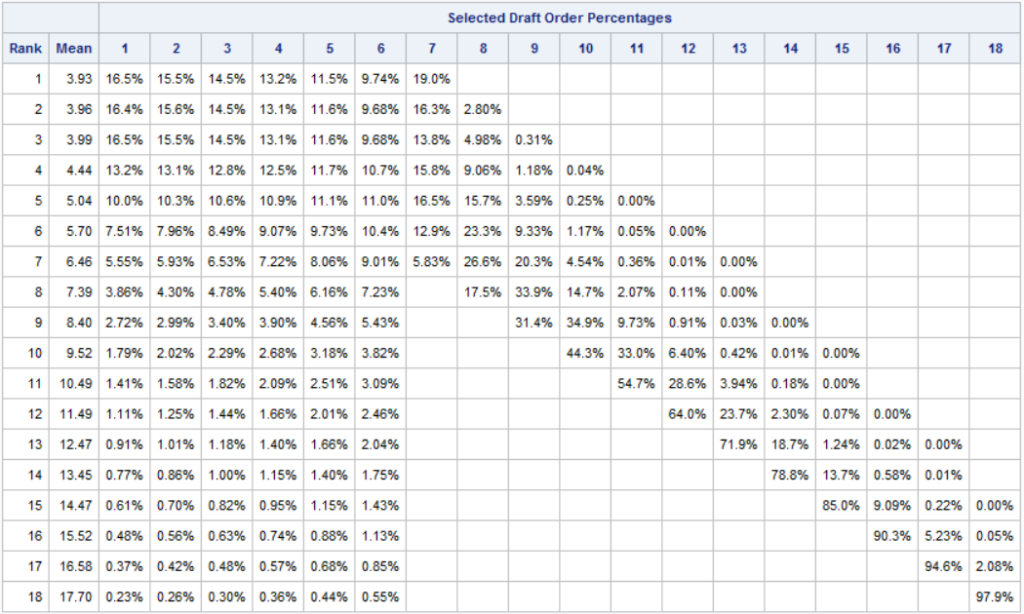 I have some ideas for additional reports. For example, what percent of the time do the teams with the 6 worst records get the top 6 picks – both counting order and regardless of order.

But let me turn this over to you Steve and SteveR for your initial comments.

SteveR: First off, thanks for having me on this fun series you guys do.  And yes, you are correct on all of your assumptions with the rules.  Everything for the lottery is starting fresh this year with no prior year restrictions.  This is year 1 sort of speak.  1 other thing is that with ties, a tiebreak with teams is absolute- prior year worst record gets the spot- it’s not like other sports where they split the odds in half.

First thing that strikes me looking at the table is how little difference there is between teams that finish with the 1st thru 3rd worst records.  Just the way they wanted it.  A higher floor for the worst case scenario is pretty much the only difference.

Looking at the means you have here, it looks like not a really big difference between top 5 picks at all (1.11 difference in the Mean from 1st to 5).  But it looks at the same time that there is a lot more variability with #5(where the Nats finished last year by the way) than top 3.  Could you list the distributions of top 3 picks, top 6 picks, and then non lottery for all the picks?  And what the median pick is for all spots- is that way different than the means are?

Steve M.: MLB’s formula will hit some teams hard in the lottery. Having the third worst record doesn’t guarantee you a Top-3 pick.

SteveR: Which would seem to be exactly what MLB and the players wanted when they agreed to it.

I have to say that having the third worst record gives you an almost 1/3 chance of of picking 1 or 2; and almost a 1/2 shot at the third pick or better. Seems like a worthwhile trade-off to me. Bottom line to me is that it does throw enough variability in to discourage tanking while not being too onerous.

I would expect the Median and the Mean to be pretty close. But given that there is no 3.93 pick, the Median representing the midpoint is a better indicator of how a team will pick. As I would have expected, with just a couple of exceptions, once you get to non-top 3 teams (which combined should have a 49.5% chance) the Median is the same as the team’s rank.

Here is the distribution if we combine the top 6. Note that the 12ths pick is possible (for the number 6 team), but it happens so rarely that the percentage is less than .005% which causes it to round to 0.00%

And here is the distribution for the non-lottery teams.

The most interesting (to me) issue that this table highlights is how little difference there is between the team that just missed the post-season vs. 6/7 teams below them in the standings.

SteveR: So not really looking like much of a difference at all between worst thru 4th worst records.  And 5th and 6th still relatively close as well looking at it.  Really not until 7th worst record do you see a bigger drop.  After you get to 9th it’s pretty much in order.  Would seem like they set it up where the bad teams will have a better shot, but it’s not an overwhelming chance at a higher pick.  Seems to be exactly what the players and MLB wanted.

Steve M.: The incentive to try to lose is really no longer there given the lottery. But the new CBA fell short in forcing teams to spend on improving their teams because there is no spending floor. In the end, it would be great if the Orioles are not picking 1 of 1 again.

Don: And here are a few more summaries.

Roughly .0163% of the time will the bottom 6 teams get the bottom 6 picks in order. Suffice it to say, pretty rare.

And here is a distribution of how many times a team that is not one of the worst 10 (I picked 10 because those picks were protected before the new CBA.

SteveR: So about once in every 20 years will all 6 worst teams get top 6 picks.

There is a great site by the way that people can go and play the lottery themselves and see the lottery in virtual action: Tankathon | 2023 MLB Draft Order & Lottery Simulator

This entry was posted in Analysis, Draft, Point-CounterPoint. Bookmark the permalink.
← Previous Article | Next Article →