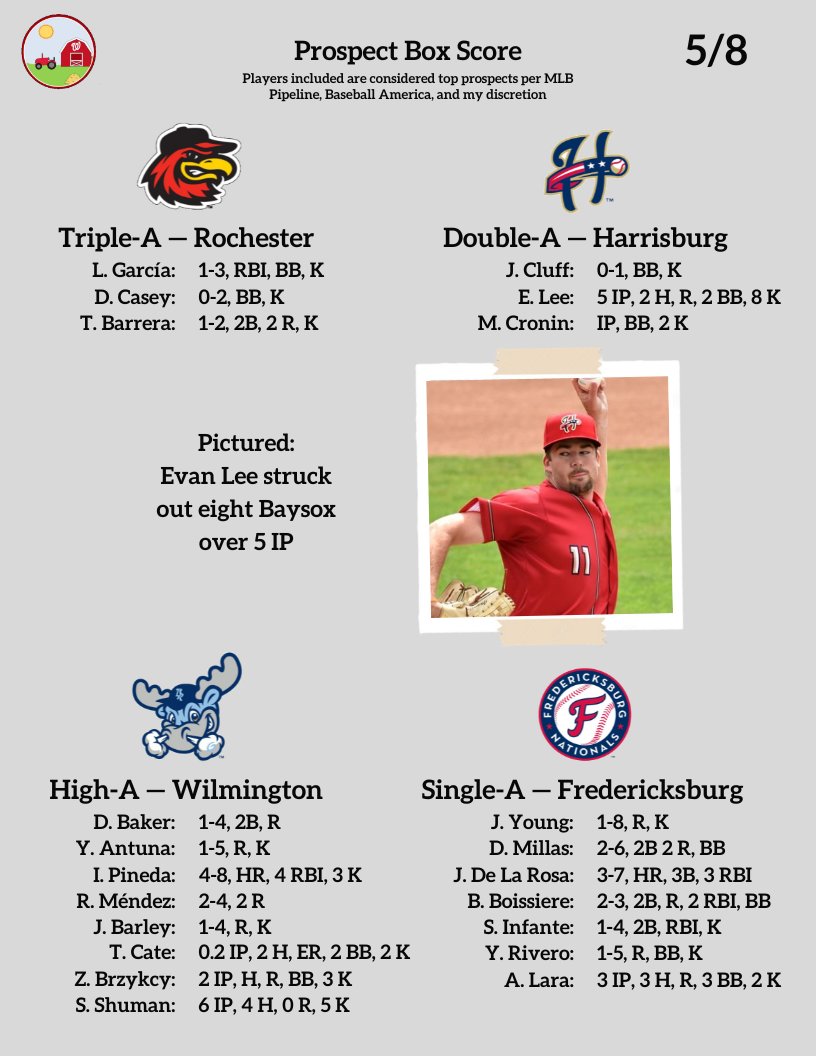 With all of the rainy weather in the east, all games were played today with lots of those 7-inning doubleheaders.

The FredNats and Lyncburg Hillcats finally finished their weekend series with a doubleheader that the FredNats swept.

Jeremy De La Rosa had a huge day with a home run and a triple and a single with 3 RBIs. Viandel Pena hit the game winning home run in the nightcap.

One of the top prospect pitchers was on the mound and Andry Lara was limited to 3.0 innings and 1-run but issued 3-walks. He has to limit the walks.

The Blue Rocks’ doubleheader got a big offensive day by catcher Israel Pineda, and a 6.0 inning gem from Seth Shuman who didn’t allow a run or walk a batter.

Both of their games went to extra innings and they split with a Cole Daily walk-off single.

Tim Cate was a quick pull after 2/3 of an inning as he was victimized by some poor defense, but he didn’t help himself when he gave up two walks. He was only charged with one earned run.

The Senators’ lost both ends of the doubleheader with almost no offense.  Evan Lee pitched another great game as a starter, and was the tough luck loser against a loaded Bowie Baysox team that just promoted Adley Rutschman.

Lee went 5.0 strong innings on 2-hits, 1-run, with 8 K’s. Is he ready for a call-up as he is on the 40-man roster. He could give the Nats another lefty option in the bullpen and give the team some length.

The Red Wings got enough runs to win a 2-1 game with solid work from the bullpen that had to cover 6 1/3 innings of shutout baseball led by Ben Braymer.

The offense got veteran thump from Andrew Stevenson and Luis Garcia had a key RBI. Joey Meneses continued to come up with big hits.

The Nats farm system put up some strong numbers today.