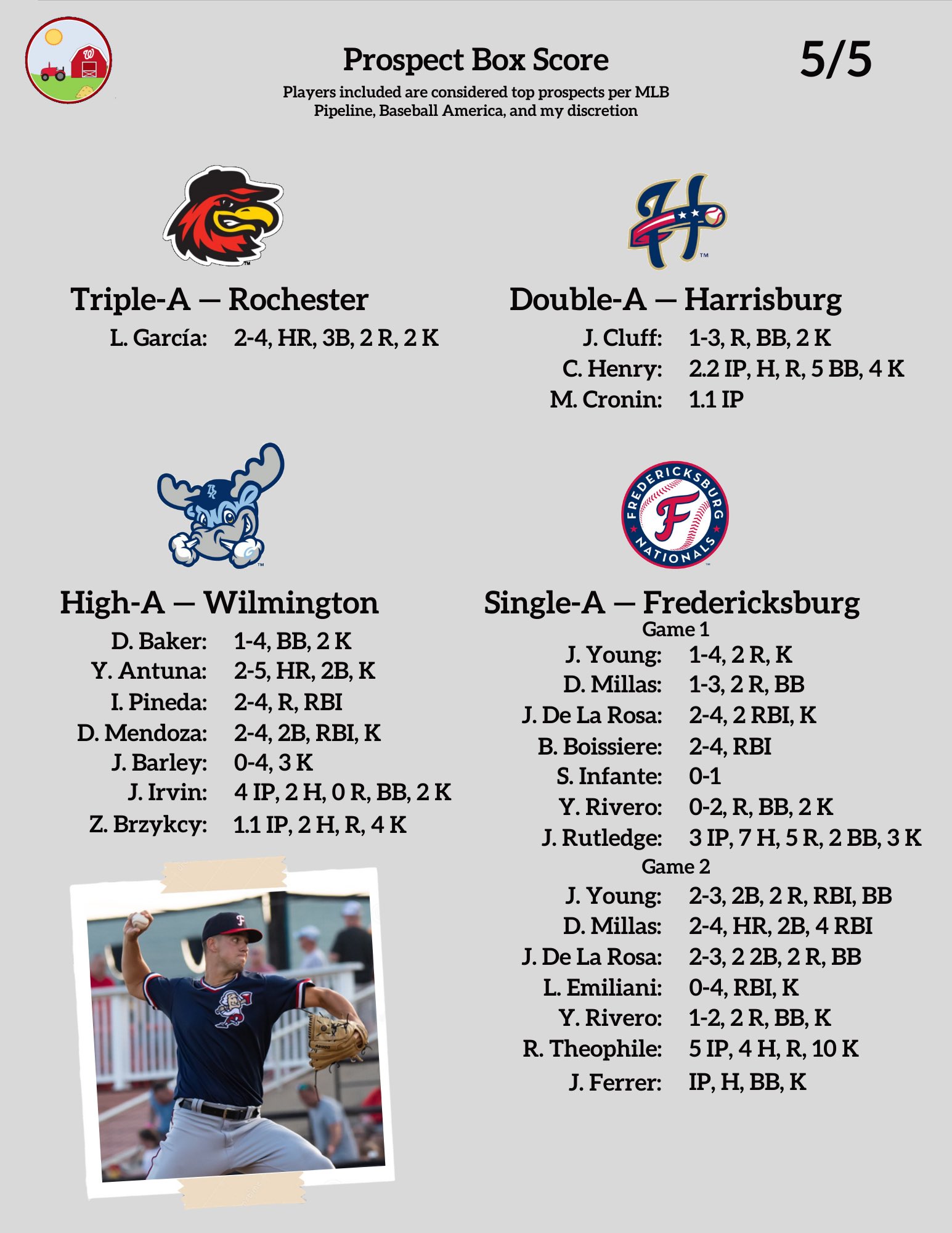 Happy Cinco de Mayo and of the five games in the minors, the farm won four. Today was a pitching prospect frenzy.

The FredNats had a doubleheader headlined by Jackson Rutledge‘s season debut in Game 1. In Game 2, Rodney Theophile was on the bump looking to keep a sub-1 ERA (his ERA started the day at 0.86).

The Blue Rocks had Jake Irvin to try and respond to their loss in yesterday’s game.

Cole Henry and the Senators looked to get an edge in the series against the Baysox. The two have split the first two games.

The Red Wings were able to get their game in against the RailRiders after being rained out last night.

6′ 8″ right-hander, Jackson Rutledge made his first start since September 18th, 2021 in Game 1 after starting the season in Florida to rehab a bicep injury. To put it bluntly, he got rocked. However, of the seven hits, only two went for extra-bases. Lynchburg’s camera angle for the live stream was awkward and hard to see, so it’s tough to go in-depth about how Rutledge threw.

Pedro Gonzalez was first out of the pen, but could only get two outs before giving up five runs on two hits and two walks. With that, the Hillcats had 10 runs by the 4th.

The offense responded with a four spot of their own in the 3rd inning with help from two errors by Lynchburg’s defense and RBI singles from Jeremy De La Rosa and Branden Boissiere.

The FredNats cut lead by three more runs in the 5th after another RBI single from De La Rosa, a Boissiere RBI, and a run-scoring single from Junior Martina.

Unfortunately, doubleheader games are 7 innings by rule in MiLB this season, so their time to comeback was cut short and they dropped the game 10-7.

In the second game of the doubleheader, the FredNats got their revenge with a 9-1 win. Theophile K’d 10 batters and gave up zero walks. The one run he surrendered actually raised his microscopic ERA to 1.04.

It was Drew Millas driving in four runs with a homer and a double, and Jeremy De La Rosa went 2-for-3 raising his batting average to .316. Jacob Young added two hits from the leadoff spot in this 7-inning game.

What an ending in Wilmington as Yasel Antuna‘s bat came alive and he hit a double earlier in the game and a walk-off homer to win it.

For the offense, Antuna, Israel Pineda, Drew Mendoza, and Omar Meregildo all had 2-hit nights but the Blue Rocks only pushed two runs across before Antuna’s walk-off.

Today was a good test for, top prospect, Cole Henry. He went up against a Baysox lineup that featured four Orioles’ prospects in their Top 30, two of which are also MLB Top 100 prospects which includes Adley Rutschman as the tops in all of baseball, per MLB Pipeline.

For the first time this year, Henry struggled with fastball command. He consistently got behind hitters, resulting in five walks, but he limited the damage and exited mid at-bat in a 0-0 game once he reached his pitch limit at 69 pitches, but unfortunately his replacement threw a wild pitch to allow an earned run on Henry’s ledger.

In the 1st, Henry was able to work around a single by Rutschman and a walk to Jordan Westburg, both top prospects. The 2nd was far cleaner, he walked the leadoff guy then retired three batters in a row. In his last inning of work, Henry walked two more and exited with two outs.

Andrew Lee relieved him and allowed that inherited runner to score via the wild pitch, ending Cole Henry’s scoreless streak at 15 2/3.

Another Top 100 prospect was on the mound for the Baysox in D.L. Hall. The Senators got to the southpaw in the 4th inning with a three hit inning including a double by Justin Connell and a go-ahead two-run single by Dondrei Hubbard. It was Hubbard’s third four-hit game this season. He drove in four runs with a two-run single and a two-run home run. Taylor Gushue drove in a run with a single and Wilson Garcia had a sac fly RBI. 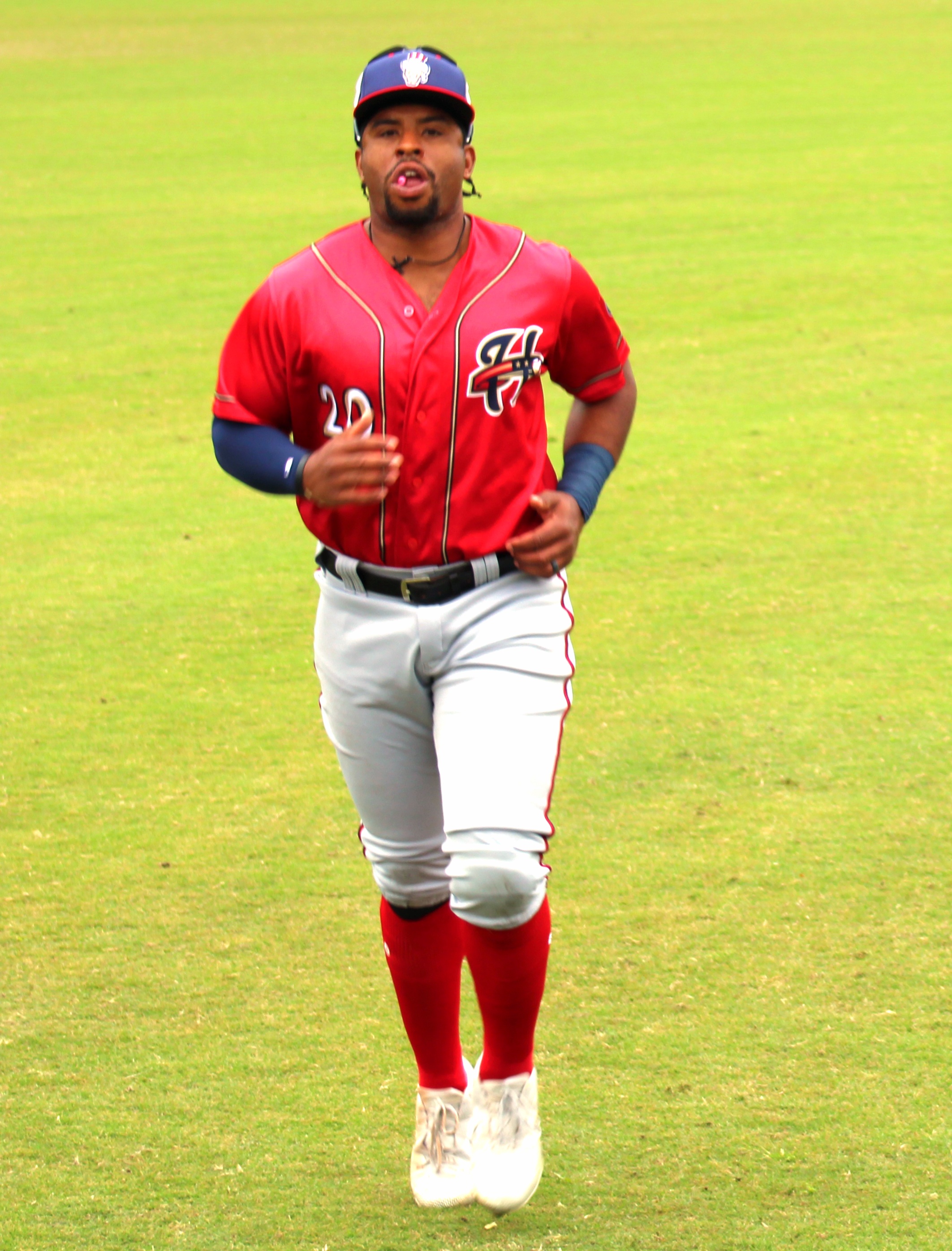 The hitters continued to piled on, and the Harrisburg bullpen was lights out to secure the 6-1 win.

Something you won’t see in the box score: Jecksson Flores made two tremendous plays towards the end of the game. The first was a sure-fire seeing-eye groundball single to his right, but he gloved it then spun and threw in one motion to get the runner at first. The second was a diving play in the hole to his left to rob Rutschman of a hit in the 9th.

We got to see Jackson Tetreault put together a great start in a 2-0 shutout victory for Rochester. With 5 2/3 innings of 3-hit, no run baseball with no walks and 5 Ks, Tetreault quickly picked off one of those three baserunners.

Luis Garcia provided all of the offense the Red Wings would need with a pulled homer and a triple on a 2-hit night.

The Nats’ minor league system had quite the night. Yasel Antuna hit a walk-off homer for Wilmington, and the farm system saw many youngsters step up. Jackson Tetreault was the star pitcher of the night. 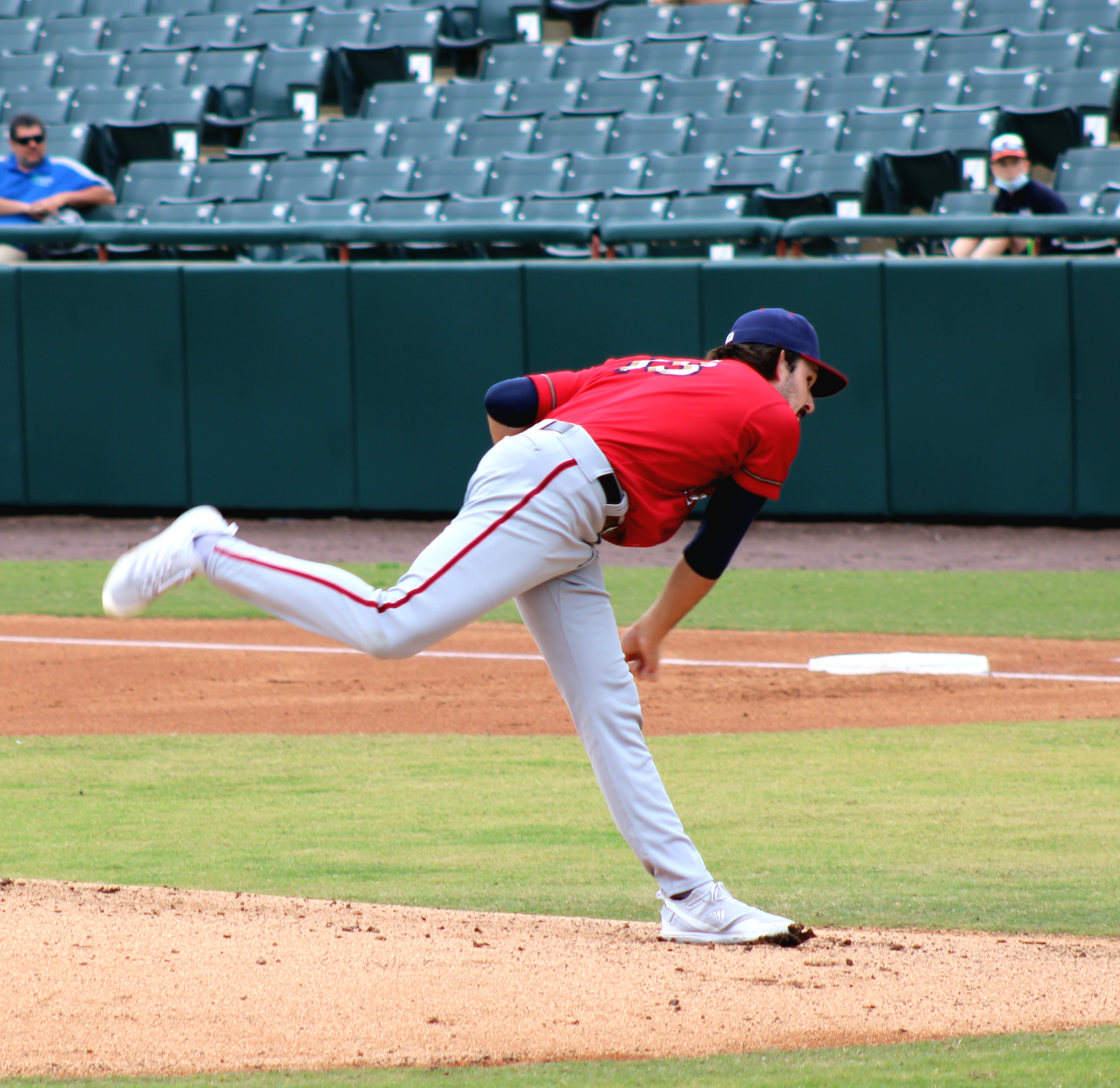 Cole Henry with another start; Photo by Andrew Lang for TalkNats